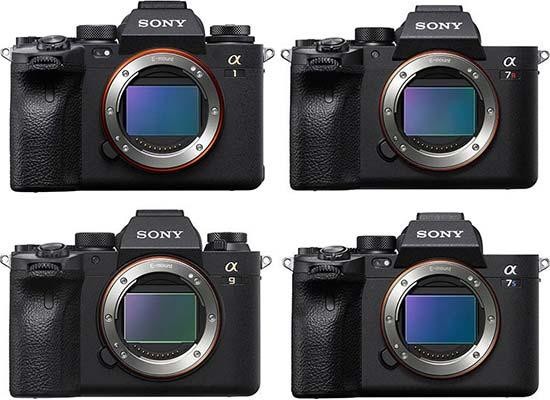 So we have the A7R series for landscapes, the A7S series for videographers and the A9 series for sports shooters, with the plain A7 series as the affordable all-rounder and the recently introduced A7C as a compact travel model.

Until now, that is - with this week's launch of the Alpha 1, Sony have gone all-in to create one camera that they claim can deliver everything that all their other A7/A9 series cameras deliver (with the exception of the compact size of the A7C).

That's right - the Sony A1 could effectively replace your A7R, A7S and A9 cameras, if you were fortunate enough to own all three!

That tempting proposition does come with a rather high price - at £6,500 / $6,500 body only, the Sony A1 is the most expensive full-frame mirrorless camera ever.

Indeed, that price-tag puts it on par with the flagship Canon EOS-1D X Mark III and Nikon D6, two DSLR cameras that have been primarily designed for Olympics sports shooters.

On the other hand, buying a A7R, A7S and A9 would cost in total far more than the Alpha 1's asking price, so unless you prefer to work with a backup body for added peace of mind (and we know a lot of photographers do), the new Sony A1 potentially makes sound financial sense if you do cover all of those photographic genres. We never thought we'd say that about a £$6500 camera!

But does the Alpha 1 really outperform its three siblings, and should you put all of your eggs in one basket?

We're bringing you this in-depth head-to-head comparison between the flagship Sony A1 and the three Sony cameras that it potentially replaces - the high-resolution A7R IV, sports-focused A9 II and video-centric A7S III - to find out if one camera can really rule them all...

The Sony A1 has a 50 megapixel sensor while the A7R IV has 61 megapixels, giving it an edge in out-and-out resolution, although you'd probably be hard-pressed to tell the difference between the two unless you're making large prints.

The Alpha 1's stacked design and its slightly lower megapixel count could potentially give it an advantage over the A7R IV for noise control at higher ISO values.

What differentiates the Alpha 1 and A9 is the type of sensor that they have. The A7R IV uses a standard CMOS sensor, whereas the A1 and the A9 II have a stacked, back-side illuminated sensor with integral memory, which should translate into better low-light performance at like-for-like ISO speeds as well as delivering faster performance.

The A7S III only has 12 megapixels, but its large pixels have clearly been optimized for low-light performance and 4K video - it's capable of delivering full-width 4K (UHD) video at 60p.

The Sony A1 has a special multi-shot shooting mode in which it takes 16 different images that can then be combined using the Imaging Edge desktop software to produce a single, 199-megapixel image.

Amazingly, you can even use flash during this process if required thanks to the new sensor's fast readout speed.

Note that this mode only works by keeping the camera absolutely still and for non-moving subjects.

The A7R IV has an even higher-resolution 241 pixel shift mode, but you can't use the flash as on the Alpha 1.

The A9 II and A7S III don't feature this mode at all.

The Alpha 1 offers a headline-grabbing 8K video mode that makes it one of only two digital interchangeable lens cameras to offer this feature at present, the other being the Canon EOS R5.

When shooting 8K/30p and 4K/60p, the Sony A1 has a 30 minute advisory limit, but is allegedly able to continue recording for even longer than that.

So the A7S III was previously the most video-centric camera here, but for 4K the Alpha 1 matches it in every respect, except for the maximum recording time limit, and adds all of those headline-grabbing 8K capabilities.

The new Sony A1 and the A7S III both have an AF system with 759 on-sensor phase detection points that cover approximately 92% of the image area.

The A9 II has 693 on-sensor phase detection autofocus points offering 93% coverage of the sensor.

The Alpha 1 checks the focus and metering 120 times a second versus the A9II's 60 times a second, which should make it even more adept at tracking moving subjects.

The A7R IV has 567 on-sensor phase-detection AF points covering 74% of the image frame.

The Alpha 1 also offers improved Real-time Eye AF for humans and animals and a brand new new feature, Real-time Eye AF for birds, something that none of the other Alpha cameras have yet, although a future firmware update may enable the new bird mode on at least some of them.

The A9 II was previously the fastest Alpha camera on the block, capturing images at up to 20fps with the electronic shutter or 10fps with the mechanical shutter.

If you want even faster burst shooting, the Sony A1 takes things to a whole other level by being able to shoot at 30fps with the electronic shutter, thanks to its new Bionz XR processing engine, although the top speed is still only 10fps when using the mechanical shutter.

The 12 megapixel A7S III can shoot at 10fps for up to a whopping 1,000 JPEGs or Raw images with either the mechanical shutter or the electronic shutter.

The 61 megapixel A7R IV can still shoot 10fps burst sequences but only for 68 JPEG and 68 compressed RAW images.

Note that, impressively, all of these rates are with full AE/AF tracking.

If you were hoping that the Sony A1 would radically deviate from the tried and trusted Alpha blueprint, then you'll be sorely disappointed.

Side-by-side, it looks like a combination of all the other high-end A-series models, especially the A9 II, with just a slight reworking of the A9 II's drive mode/focus mode dials on the left-hand side of the top-panel.

The Alpha 1 is the heaviest camera here, and the A7R IV the lightest, with all four being roughly comparable in size.

All four of these cameras have exactly the same 5-axis optical in-body image stabilization system which provides up to 5.5-stops of compensation.

This is one of the few areas where Sony lags behind some of it main rivals, most notably the Canon EOS R5, which offers up to 8 stops of compensation when used with certain lenses.

The Alpha 1 and the A7S III do benefit from having a special Active Mode that increases stabilization for hand-held movie shooting by using the BIONZ XR processor(s).

Until the Alpha 1 came along, the A7S III had the best EVF of any Alpha camera - a 9.44M-dot OLED Quad-XGA electronic viewfinder with 0.90x magnification and a refresh rate of up to 120 fps.

The new Sony A1 takes things to another level, sporting the same 9.44M-dot OLED Quad-XGA EVF with 0.90x magnification but doubling the refresh rate up to 240fps which ensures no black-out.

The A7R IV has a still very impressive 5.76M-dot OLED electronic viewfinder with 0.78x magnification and a 120fps refresh rate.

The A9 II, meanwhile, lags behind its siblings by only having a 3.76M-dot EVF with 0.78x magnification and a 120fps refresh rate.

All four Alpha cameras have the same 3.0-inch LCD screen with 1.44 million dots of resolution.

The screen on the A1, A7R IV and A9 II can be tilted up by 107 degrees and down by 41 degrees, whereas the A7S III has a more versatile fully articulating screen that can be flipped out to the side, rotated to the front, and folded against the back of the camera to help protect it.

In terms of touch-screen functionality, the new Alpha 1 thankfully follows in the footsteps of the A7S III, inheriting the same menu structure and upgraded touch control, rather than the crippled touchscreen and more complex menu system of earlier Alpha models, including the A9 II and the A7R IV.

The A7R IV, A9 II and A7S III all have a maximum flash sync speed of 1/250th second using the mechanical shutter.

The Sony A1 provides an even faster flash sync speed of 1/400th sec using its mechanical shutter, the world's fastest, and 1/500sec if you shoot in APS-C format.

As you would expect from a modern professional camera, all four models have two memory card slots.

There is one main difference between them though.

The A9 II and A7R IV both have dual UHS-II memory card slots, whereas the A1 and the A7S III's slots can be used for either SD UHS-I/II compliant memory cards or faster CFexpress Type A cards.

All four cameras use exactly the same NP-FZ100 battery, although the actual battery life does vary between them.

So the new Alpha 1 does lag behind the other three models somewhat, presumably because of the extra demands placed upon it by the dual Bionz XR processors.

So even if you wanted to buy the Alpha 1 in place of the cheapest two of those cameras, it still makes financial sense (just), although you'd have to give up having a backup body to do so.

Offering nearly as much resolution as the A7R IV, faster burst shooting than the A9 II, and cranking the A7S III's impressive 4K video all the way up to 8K, it's probably clear by now that the Sony Alpha 1 really does take the best elements of all the other, more specialized Sony full-frame cameras and merges them into one supreme ruler - on paper at least!

So what do you think? Would you choose the new Sony A1 or one or more of the other excellent cameras? Leave a comment below!