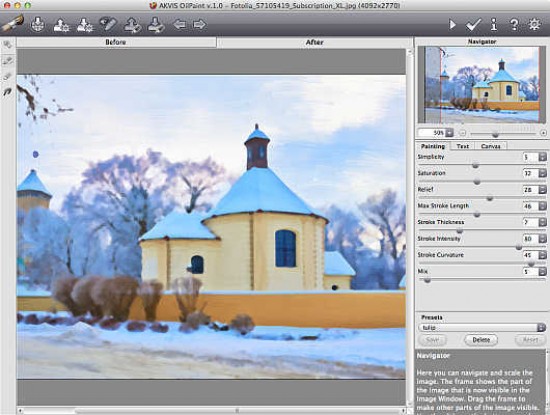 Akvis has updated its OilPaint software to Version 2.0. Available as a standalone application and as a Photoshop plug-in, Akvis OilPaint is claimed to offer "an incredible algorithm" for turning photos into oil paintings. The software offers a number of ready to use presets, and allows users to share their favourites with other fans of the oil painting technique. The batch processing feature enables the program to automatically process a series of images in order to create a number of illustrations at the same style or to process all frames in a video. The updated version brings faster image processing, new brushes and other important improvements, and fixes bugs. Registered users of Akvis OilPaint can upgrade to version 2.0 for free.

February 28, 2014 - AKVIS updates its recently released software product AKVIS OilPaint for creating oil paintings out of photographs, for Windows and Mac OS X. Version 2.0 provides an increase in the speed, new brushes, and other important improvements.

AKVIS OilPaint creates oil paintings from photographs. The mysterious production of a painting happens right before your eyes. The unique algorithm authentically reproduces the technique of the real brush. With this cutting-edge software you can become a painter!

This program is straightforward and simple, it offers a number of ready to use presets that helps to start working. You can save your favorite photo-to-painting settings as a preset and use them further. The program lets sharing your most liked presets as well as impressive results with other fans of the oil painting technique.

You can personalize your picture by adding a signature of an artist, a title, a greeting. To make the painting even more realistic you can adjust the canvas.

The Batch Processing feature helps to automatically process a series of images, in order to create a number of illustrations at the same style or to process all frames of video.

The software product is available as a standalone program and as a plugin filter for Adobe Photoshop, Corel PaintShop Pro, and other image editors, for Windows and Mac OS X.

Significantly improved image processing speed. Now the program works faster!
Added the Oil Brush that is useful is you want to strengthen the oil effect on desired areas. The tool creates high quality strokes that look like made with a real oil paint brush.
Added the History Brush that lets you fade the effect and restore the image to its original state. This smart brush can work in two modes, weakening the oil painting effect or/and the result of the post-processing tools.

These new post-processing tools are only available for the advanced licenses (Deluxe/Business), on the After tab.

Improved the texture generation. Now the canvas is applied considering the changes made with the post-processing tools.
Reorganized the buttons in the Control Panel. The loading/saving commands are now grouped in two lists.

Registered users of AKVIS OilPaint can upgrade to version 2.0 for free.

For a free trial, AKVIS offers 10 days of fully functional use.
Download AKVIS OilPaint v.2.0 and use it during the trial period free of charge.

AKVIS OilPaint, Home license, sells for $49 or €39. The functionality of the program depends on the license type. Consult the official website for more details about license types and versions of the software.

AKVIS (http://akvis.com) specializes in development of image processing software and scientific research. The company was founded in 2004 by IT professionals having considerable experience in programming and software development. Since then the company has released a number of successful programs.