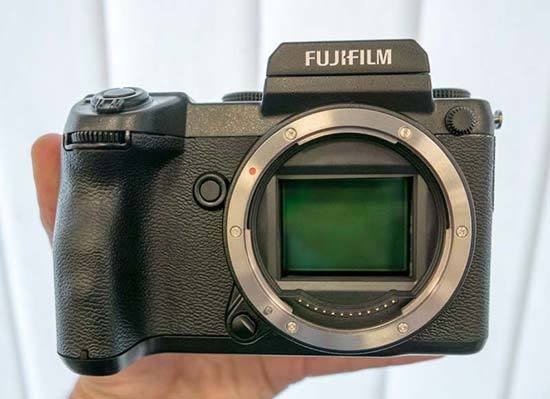 Unveiled at Photokina 2016, the Fujifilm GFX 50S is the first digital medium-format camera body in Fuji's brand new GFX system. Having attended the launch event in Cologne, we now bring you our first hands-on preview of this exciting new product. Do note that all of our remarks are based on a prototype/pre-production sample.

Just as MF rangefinder cameras - like the Mamiya 7, for example – were arguably a lightweight alternative to medium-format SLRs (such as Mamiya's own RB67), a new breed of MF mirrorless cameras - including the Hasselblad X1D-50c and now the Fujifilm GFX 50S - are aspiring to be a lightweight alternative to medium-format DSLRs. Weighing in at around 800 grams, the Fujifilm GFX 50S is about 75 grams heavier than the Hasselblad X1D-50c but still a lot lighter than an H5D-50 or a Mamiya 645DF+ with a matching digital back.

Looked at from another angle, the new GFX 50S can be viewed as an oversized Fujifilm X-T2. To cite yet another example from the film era, if the Fujifilm GW690 Professional was nicknamed the 'Texas Leica' for looking a lot like a black Leica M3 on steroids; the Fujifilm GFX 50S may eventually come to be known as the 'Texas X-T2'. Of course, a closer look reveals a lot of minor and not-so-minor differences, but the overall design is strikingly similar. There is a generous and well sculpted grip, complemented by a prominent thumb rest. The top panel features both an ISO sensitivity dial and a shutter speed dial, each with its own locking pin. The exposure compensation dial, however, is notable by its absence. New to the Fujifilm GFX 50S is a small status LCD panel displaying all the vital shooting information – including shutter speed, aperture, exposure compensation, sensitivity, shooting mode, white balance and film simulation mode - in one place. The rear panel will also look familiar to anyone who has ever handled a Fujifilm X-T1 or X-T2, featuring a 4-way controller with a centred MENU/OK button, a separate DISP/BACK button, a Quick Menu button and several programmable buttons. The Delete and Playback buttons have been moved to a the top of the rear display housing, but both are present and correct. The camera features both front- and rear control dials.

Speaking of the rear display, it's strikingly similar to that of the Fujifilm X-T2. It can be usefully tilted up and down by about 90 degrees when in landscape mode and upward when shooting in portrait mode, at a press of a button (the X-T2 uses a sliding switch for the same purpose). The electronic viewfinder - which in our pre-production sample featured a similar OLED panel as that of the X-T2 - is removable, improving system modularity and enabling the camera to shed some weight if necessary. In addition, an optional adapter makes it possible to fit the finder at any angle. There's a hot-shoe on top of the viewfinder, making it possible to mount a variety of flashguns.

Completely new to the GFX system is the large 'G' lens mount. The first six lenses to use this new mount include the Fujinon GF63mmF2.8 R WR standard prime, the GF32-64mmF4 R LM WR wide zoom, the GF120mmF4 Macro R LM OIS WR macro lens, the GF110mmF2 R LM WR portrait lens, the GF23mmF4 R LM WR ultra-wide prime and the GF45mmF2.8 R WR moderate wide-angle lens. All of these lenses are expected to be released in 2017. The lenses feature an aperture ring, and have a new C (Command) position on the ring to enable aperture adjustments with a command dial on the camera body. All the lenses boast a dust- and weather-resistant construction that withstands temperatures as low as -10 °C. Because of the mirrorless construction of the camera, these new Fujinon G lenses have a very short flange-back distance of only 26.7 millimetres.

The Fujifilm GFX 50S comes equipped with a 43.8×32.9mm CMOS imager with a resolution of 51.4 megapixels. As Hasselblad's Ove Bengston confirmed to us, this is essentially the same sensor as the one found in the Hasselblad X1D, the Fuji's only direct competitor for the time being. This chip has an imaging area that's 1.7 times greater than that of a 35mm „full-frame” sensor, and over 3.7 times larger than the APS-C sized imagers used in Fujifilm's X-series CSCs. Unlike those cameras, the Fujifilm GFX 50S has a traditional Bayer colour filter array in front of the sensor. The pixel count isn't really higher than that of the highest-resolution 35mm full-frame DSLRs – the Canon EOS 5DS and 5DS R – but the pixel pitch is greater, promising a wider dynamic range and a better signal-to-noise ratio.

One of the main differences between the Hasselblad X1D and the Fujifilm GFX 50S is that the latter has a focal-plane shutter, allowing for shutter speeds as fast as 1/4000th of a second. It also means that the lenses can be made smaller, lighter and cheaper as they do not need to have a built-in leaf shutter.

The Fujifilm GFX 50S employs a contrast-detect type autofocus system, with no PDAF sensors embedded in the imager. The lack of phase-detection AF is likely to be a competitive disadvantage versus high-resolution 35mm cameras – but then again, medium-format photography has never been about lighnting-fast autofocus in the first place.

As already mentioned, the GFX system features interchangeable lenses, flashguns and viewfinders, and an optional portrait grip. Unlike certain other medium-format systems, there are no interchangeable digital backs, though, as the sensor is built into the camera body.

Officially, the GFX system is still in development and will likely launch in early 2017. The GFX 50S camera will probably cost less than $10,000; including a Fujinon GF63mmF2.8 R WR lens and the standard electronic viewfinder.