Photokina 2016 Interview: Hasselblad on the X1D and Fujifilm GFX Cameras 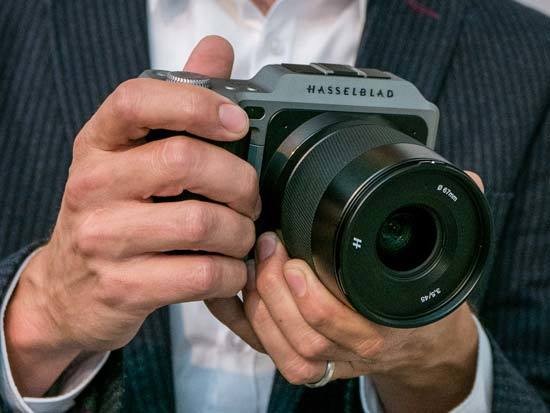 We sat down with Ove Bengston, Hasselblad Product Manager, to discuss the Fujifilm GFX system, the X1D and lenses, the V1D concept camera, and the True Zoom smartphone device.

What is Hasselblad’s take on the new Fujifilm GFX?

We think they have made a fantastic product. It’s based on same sensor, but they’ve made different design choices. It’s lot bigger and more technical than the X1D. Two different players in a new segment will make people aware of medium format and raise awareness of it. If we’re alone, we might not reach customers. Fujifilm will help create a lot of buzz around the world.

We consider the X1D to be a medium format camera. It’s not the same as medium format film though , which is defined by 120 film. Ultimately the format is not relevant, image quality is the priority. Medium format is clearly better than smaller cameras, and produces professional results.

The Nikon D800 series did take some sales from medium format, as it can do a large portion of what medium format can do.

The X1D and the Fujifilm GFX are completely different products. Hasselblad have focused on design and simplicity. We believe that you can grow to love the X1D – it speaks to your soul, and you are very happy when you see the results. If you want all the features, don’t choose the Hasselblad X1D.

Do you think other companies will release similar cameras?

There have been many rumours for many years – for Canon, Sony, Nikon – around the world. Even for those big companies to add another system is a massive undertaking. They don’t make money through the top models – they have them to help sell the cheaper models down the range – so an even more expensive system doesn’t make sense.

Fujifilm have a long history in medium-format, so it’s logical step for them, but not so much for other companies who don’t have that history.

Ultimately, though, we believe that it’s not easy to outdo the X1D in terms of sheer image quality.

Has the launch gone well in terms of sales volumes?

The X1D has exceeded our wildest expectations. It has filled a hole in the market, and we’ve had a tremendous response from photographers.

The X1D has just started shipping. What were the reasons for the launch delay?

Demo units have now started shipping to stores in key countries – US, UK, Germany, Japan, China and others – both to our subsidiaries and some photo independent stores. We’re shipping a few units out every day. End users who pre-ordered at launch should get their camera next month, with 1000’s of people waiting to recieve their camera.

The 30mm lens will be available very shortly, probably when the first X1Ds are delivered to customers. It’s one of the best Hasselblad lenses ever. The price is 3300 Euros.

With the 30mm, we now have 3 lenses, which is not much for a system. The three lenses are the same focal lengths as for the Xpan camera.

Next year, if all goes well, there will be 5 more lenses added throughout the year. We are very serious about this system. The 5 lenses are already in development. Our lens partner is Nitto, and they are very busy with Hasselblad lenses. We agree the focal length and aperture in discussion with Nitto, working very tightly together. They are a very traditional Japanese company who are very friendly.

We cannot disclose what the 5 lenses are yet, but they complement the existing ones. Wed don’t normally have a public lens roadmap, as future products might not be realised, and a roadmap might put buyers off our current products.

It’s an abbreviation of 1941-2016 – 75 years of Hasselblad, who launched an aerial surveillance camera for the Swedish Airforce.

We have a cooperation with Alpa, putting our products into theirs. There is a new range of Sandqvist bags – 3 to start with. We’ve partnered with Motorola with the True Zoom. And there’s a new concept camera called the V1D.

How many black X1Ds are being made?

It’s not a limited edition, but a “Special Edition”, which will keep the badge 4116 for this year. Then it might be supplied without the badge. There’s quite a lot of demand for a black version, but not huge as people like the difference of the first version. There are always people who love black cameras. Hasselblad know that from their history.

The X1D 4116 Black will be sold in a kit  - the lens and leather wrist strap (not available separately) in a gift box. It will be more expensive than the standard edition of the X1D.

Will black ever be a standard option?

What kind of camera is it?

Will it ever be produced?

That depends on the reaction from partners and customers. It would have a high price of between 12-15K Euros. It’s very much an idea of what could be. If it actually came out, it might be very different. It’s one of the ideas taken from a different project.

What parts are modular?

It’s not modular in same sense as V camera, it’s more “configurable”, rather than modular. You can select the viewing device – a screen in two locations, an EVF, outdoor viewfinder - and the grip can be mounted on either side of the body for left or right-handed people.

It’s a completely new phone. Moto thought a camera would be a good modification for the phone. Mobile devices lack a good flash and an optical zoom, so the Hasselblad True Zoom offers a10x zoom and Xenon flash. It’s not a camera, it’s a zoom for your phone with a Xenon flash.

The development time was about a year. We had to adapt our way of thinking to accommodate for the lower image quality of smartphones. It saves a RAW file in the same format as our Phocus software (latest version – 3.0.4).

Are there any plans for future models?

Yes. If this takes off, who knows what we can add. We will wait and see for actual response from customers before next steps. It hasn’t reached end users yet – it’s being sold in the US via Verizon. Not on sale in Sweden yet. The initial reaction has been positive.