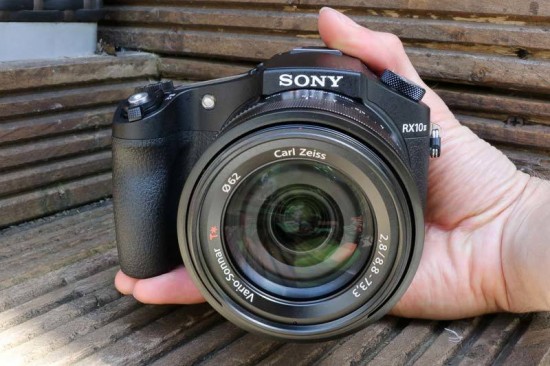 The RX10 II continues the RX10’s theme of being an advanced superzoom bridge camera that incorporates many high-end features and controls usually found on midrange DSLRS.

The biggest improvement made to the RX10 II is its new Exmor RS CMOS sensor. Its physical 1-inch size and 20.2MP resolution remain the same as the Exmor R sensor used in the RX10, but the architecture is very different.

This RS sensor version employs a stacked CMOS design that relocates the signal processing circuitry from alongside the pixel array to a separate layer beneath it. This in turn is stacked on top of a DRAM memory chip, which combined with a greater area devoted to pixel processing results in a claimed 5x faster image processing speed.

The technology has been previously used in smartphones to enhance the performance of extremely small-sensor cameras, but it’s a ground-breaking feature in the standalone digital camera sector. Consequently the RX10 II will now shoot stills at a maximum 16fps; up from 10fps in the original RX10.

Another benefit of the improved sensor processing speed is in video capture. The RX10 II is now capable of internal 4K 3840 x 2160 recording at up to 30p for 29-minute durations, plus you can also capture 17MP stills during video recording.

Not only can the RX10 II record at high resolutions, it’s also able to capture high frame rates for super-slow motion video clips. Up to 1000fps is possible for 40x slower recording, though at a reduced resolution of 1136x384, and for only two seconds. However, that does equate to 1 minute 20 seconds of playback duration when viewing at standard PAL 25fps. Additional recording speed settings of 500fps and 250fps are available at resolutions of 1676x566 and 1824x1026 respectively. You can also shoot at the same three speed settings for four seconds instead of two, but with an approximate 30% drop in video frame resolution.

Most digital camera shutter speeds top out at 1/4000s or 1/8000s, but the RX10 II will manage a blistering 1/32000s maximum speed. This enables you so shoot in direct sunlight whilst also exploiting the lens’ f/2.8 maximum aperture for reduced depth of field effects. The shutter also boasts an anti-distortion capability, which combined with the boosted image processing speed, should minimise distortion when capturing very fast-moving subjects.

Although we weren’t able to record our own images using the RX10 II due to the current sample cameras being pre-production models, our initial experience of the camera was a positive one. Sony hasn’t seen fit to alter the camera externally, but that’s no bad thing given the original RX10’s decent ergonomics. The new 2.35-million-dot viewfinder is a pleasure to use and a marked upgrade over the original RX10’s already-impressive 1.4-million-dot device. Elsewhere the 3-inch, 1.23-million-dot tiltable screen provides pin-sharp clarity and excellent colour reproduction.

Optically the new model shares the same specs as the original RX10, with an 8.3x 24-200mm-equivalent zoom range and a constant f/2.8 aperture. Zooming can be controlled using the rocker switch around the shutter release, or precise focal length adjustments can be made using the zoom ring around the lens barrel. This also features a manual aperture ring such as you’d find on a decent DSLR lens, which is an unusual and welcome feature on a bridge camera. We’re also pleased to see the original RX10’s exposure compensation dial return to the RX10 II.

The RX100 series has long been a benchmark for compact camera image quality, and this latest incarnation aims to maintain the reputation.

Like its bigger sibling, the RX10 II, the RX100 IV also receives Sony’s radical Exmor RS sensor with its stacked construction separating image processing circuitry from the light-gathering photosites and adding an additional layer of fast DRAM memory. Sensor size is also the same at 1-inch, and resolution is almost identical at 20.1 megapixels.

The upshot of this new sensor technology is a huge boost in continuous shooting speed from 5fps in the RX100 III to 16fps in the mark IV. As with its predecessor, the RX100 IV will shoot raw files in Sony’s ARW 2.3 format, and the sensitivity range remains unchanged at ISO 125-12,800.

The RX100 IV is the first Sony Cyber-shot camera to offer 4K, 3840x2160 video recording at 30p, 25p and 24p frame rates. If we’re to be pedantic, this resolution is actually Ultra HD – not 4K – but camera manufactures seem to regularly confuse the two resolution standards. Recordings are also limited to 5-minute clips to avoid excessive heat build-up.

Whilst the RX100 IV is capable of fully-internal 4K (Ultra HD) recording, the camera will also stream uncompressed output via HDMI to an external recording device

The RX100 IV still features the nifty pop-up viewfinder of the mark III, but its resolution has been upgraded from 1,440,000 dots to 2,359,296, giving you the viewfinder clarity of Sony’s top-end Alpha 7 CSC models. Magnification isn’t quite as high, however, at 0.59x, but you do get 100% frame coverage. Simply flick the switch on the side of the camera body to eject the viewfinder and pull the eyepiece backward.

Optically the RX100 IV is unchanged from the RX100 III, so it’s fronted by the same Zeiss Vario-Sonnar lens with T* element coating. Maximum aperture ranges from f/1.8 at wide angle to f/2.8 at full telephoto zoom and the 2.9x zoom range is equivalent to 24-70mm. Zooming is still controlled using the rocker switch around the shutter release, with the ring around the lens having alternate functions depending on which shooting mode you’re using.

The RX100 IV maintains the premium feel of its predecessors and measures just 101.6mm x 58.1mm x 41.0mm whilst weighing in at 298g ready to shoot. The bounceable pop-up flash is another nice touch, and if you don’t have time to eject the viewfinder, the 3-inch, 1.23-million-dot LCD offers crisp and accurate shot composition and can be tilted 45-degrees downward or up by 180-degrees for selfie shooting.