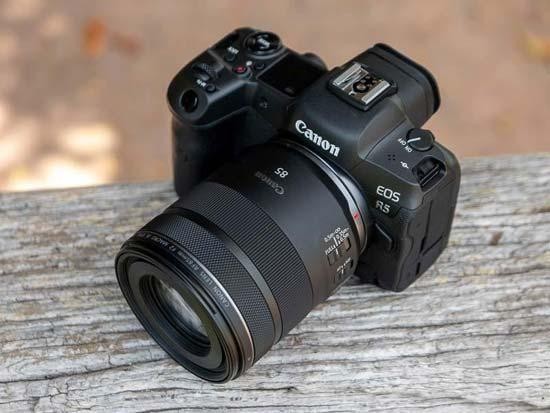 It has 9 rounded diaphragm blades for smoother bokeh and built-in image stabilisation offering a claimed 5-stop advantage, which increases to 8-stops when using the EOS R5 and EOS R6 cameras.

The Canon RF 85mm F2 is a useful macro lens with a minimum focusing distance of 0.35m and a maximum magnification ratio of 0.5x, providing 1:2 macro shooting capability.

The Canon RF 85mm F2 Macro IS STM is a pretty small and compact portrait prime lens, weighing in at 500g and measuring 9cm in length.

When mounted on the EOS R5 mirrorless camera that Canon sent us for testing, the RF 85mm F2 Macro IS STM feels well-balanced and suitable for both two-handed and one-handed use.

Build quality is very good. The Canon RF 85mm F2 Macro IS STM feels solid in your hand, even if it is mostly made out of plastic.

Sadly it isn't weather-proof, though, unlike the similar RF 35mm f/1.8 IS Macro STM lens. You'll need to step up to the Canon RF 85mm f/1.2L USM to get that feature. Having said that, we did use it in a heavy shower with no adverse effects.

The Canon RF 85mm F2 Macro IS STM boasts Image Stabilisation which Canon claims offers an advantage of up to 5 f-stops over lenses without a stabilizer.

Even better, if you pair this lens with the newer EOS R5 or R6 cameras and their in-body stabilisation systems, the amount of total stabilisation on offer increases to a whopping 8-stops.

This is activated via the Stabilizer On/Off switch on the side of the lens.

If the camera body supports it, Canon's IS technology is also able to detect intentional panning movement and automatically switch from the Normal IS mode to the Panning IS mode.

There is a focus mode switch with the usual AF/MF settings. Note that this lens usefully offers full-time manual focusing even when AF is selected.

There's also a focus limiter switch with 3 settings that toggles between Full, 0.5m-Infinity and and 0.35m-0.5m settings to help speed-up the auto-focusing system when required.

The Canon RF 85mm F2 Macro IS STM lens has a fairly narrow focus ring with a ridged, rubberised grip band. There are no hard stops at both ends of the range, making it more difficult to set focus at infinity.

When it comes to auto-focusing, the Canon RF 85mm F2 Macro IS STM is a fairly quick performer, taking around 0.15 seconds to lock onto the subject when mounted on the Canon EOS R5 camera that we tested it with.

Being an STM lens, it has a stepper motor that is designed for quick and smooth autofocus, something which videographers may find particularly appealing.

The focusing mechanism is very audible, though, making this lens less well-suited to video recording.

A now standard feature for most Canon RF lenses is the Lens Control Ring at the end of the lens barrel, which can be used to control certain key camera settings (TV, AV, ISO and exposure settings).

The lens ships with a large round lens hood (ET-77) with a lock button, but there's no case included.

Chromatic aberrations, typically seen as purple or blue fringes along contrasty edges, are only conspicuous by their almost complete absence from our Canon RF 85mm F2 Macro IS STM test shots.

With the Canon RF 85mm F2 Macro IS STM lens set to its maximum aperture, there is some light fall-off in the corners, which you'll need to correct in post-processing.

The Canon RF 85mm F2 Macro IS STM usefully doubles up as a good macro lens, offering a minimum focusing distance of 0.35m and a maximum magnification ratio of 0.5x.

The Canon RF 85mm F2 Macro IS STM is capable of producing quite nice sunstars when stopped-down to f/22 or f/29, as shown below, although flare does occur when shooting directly into the sun.

In the Canon RF 85mm F2 Macro IS STM lens, thanks to 9 rounded aperture blades, a very pleasing bokeh can be achieved.

In order to show you how sharp the Canon RF 85mm F2 Macro IS STM lens is, we are providing 100% crops on the following page.