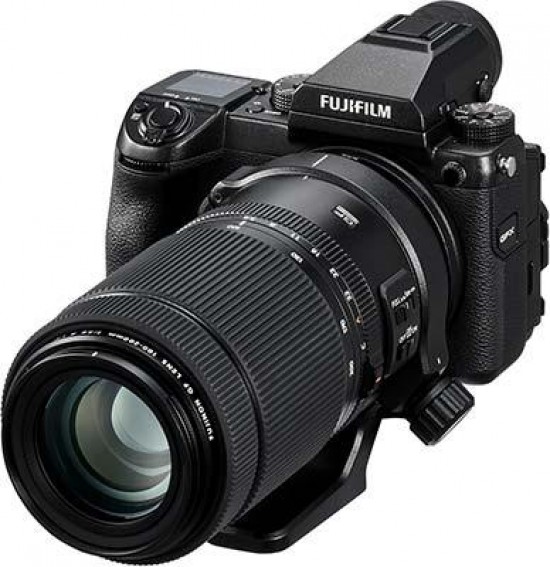 It's comprised of 20 elements in 13 groups, including 1 aspherical element and 2 Super ED elements, has 9 rounded aperture blades, features a high-speed linear AF motor, offers 5 stops of built-in stabilisation and is fully dust-, freeze-, and weather-resistant.

The GF 100-200mm is also compatible with the optional GF 1.4X TC WR Teleconverter, which extends the available focal range to 140-280mm.

With a maximum diameter of 89.5mm and a constant length of 183mm whatever the chosen focal range, the Fujifilm GF 100-200mm F5.6 R LM OIS WR is a versatile 2x telephoto zoom lens that's well-suited to the Fuji GFX 50S camera that we tested it with. Weighing in at 1050g, it's quite a heavy lens, but proved to be pretty well-balanced on the GFX 50S.

As with the other GF lenses that we've reviewed in the past, the Fujifilm GF 100-200mm F5.6 R LM OIS WR boasts excellent build quality. The lens has 10 different seals that make it dust, freeze and moisture resistant, and it features a metal bayonet.

There is also built-in optical image stabilisation in this lens, which can be turned on and off via the dedicated OIS switch on the side of the lens barrel. This utilises a 5-axis image stabilisation system that provides five stops of image stabilization, as measured according to CIPA standards, allowing you to hand-hold the camera in much lower light and still achieve sharp results.

The focus ring is pleasingly wide, smooth and beautifully well-damped in action without being loose, and has a ridged, rubberised grip band. There are no “hard stops” at either end of the focus range though.

It has a large rotation angle which enables precise focusing and moves smoothly without any play. Two different focusing aids are provided - auto magnification and focus peaking. In conjunction with the GFX 50S's optional high-resolution electronic viewfinder, we found it very easy to accurately determine critical sharpness.

When it comes to auto-focusing, the Fujifilm GF 63mm f2.8 R WR proved to be a very quiet performer on the Fujifilm GFX 50S thanks to the linear motor, and it's also pretty fast too, taking about 0.25 second to lock onto the subject in good light. We didn't experience too much "hunting" either, with the lens accurately focusing almost all of the time.

The Focus Limiter switch on the lens barrel allows you to choose between FULL or 5m-infinity, the latter option helping to further speed up auto-focusing if your subject always falls within that range.

Rather uniquely, the lens includes a mechanism for fixing the linear motor position when the camera is either turned off or during image playback, which helps to avoid any additional vibration and effectively remembers the last focal length that you used.

Focusing is usefully internal and manual focusing is possible when set via the camera body. Full-time manual focus override is not available at any time simply by rotating the focus ring.

The Fujifilm GF 63mm f2.8 R WR lens has a traditional aperture ring on the lens barrel, which allows you to set the aperture in 1/3 steps from f/5.6 to f/32, complete with full aperture markings. The aperture is also shown in the viewfinder or on the LCD screen.

A soft cloth bag and a very large plastic circular-shaped lens hood, complete with locking mechanism and a filter window, are supplied in the box, along with a high-quality tripod collar foot that can be removed from the lens (although sadly it's not Arca-swiss compatible).

Light fall-off is noticeable wide open at f/5.6, though this can easily be corrected in Photoshop. Stop down to f/8 and the vignetting is already much less prominent, but it is still visible when shooting pale scenes that fill the frame.

A minimum focus distance of 60cm at 100mm and 1.6m at 200mm doesn't make the lens very useful for shooting close subjects, not helped by the maximum magnification ratio of 0.2x (at 100mm).

With a maximum aperture of f/5.6, the Fujifilm GF 100-200mm F5.6 R LM OIS WR isn't the fastest of lenses, but it still manages to generate smooth out of focus areas thanks to having 9 rounded aperture blades.

Bokeh is however a fairly subjective part of a lens’ image quality, so check out these examples to see the Fujifilm GF 100-200mm F5.6 R LM OIS WR’s bokeh quality for yourself.