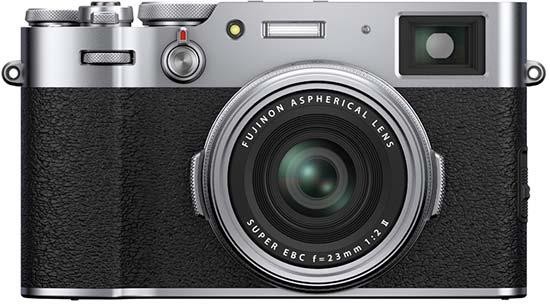 It features the very latest generation X-Trans BSI CMOS 4 sensor, which has 26.1 megapixels - a small increase from the 24.3 megapixel sensor of the Fuji X100V's predecessor, the X100F.

A fixed 23mm f/2.0 lens is found on the front of the Fuji X100V camera, which offers a classic focal length of 35mm (35mm equivalent), making it an ideal camera for street photography and the like. The lens features a revised optical design that includes two aspherical elements for improved sharpness and clarity.

Other key new features include the latest X-Processor 4, an Advanced Hybrid Viewfinder with a combined 0.52x OVF and 3.69m-dot OLED EVF, and a tilting 3.0-inch 1.62m-dot LCD touchscreen.

The native sensitivity range of ISO 160-12800 can be expanded to 80-51200, while the X100V's phase-detection autofocus system now offers 117 selectable points that cover virtually the entire sensor area.

There's also 10-bit 4:2:2 DCI/UHD 4K recording at up to 30fps and Full HD recording up to 120fps, Bluetooth and Wi-Fi connectivity, new Classic Neg film simulation mode, 11fps burst shooting with AE/AF tracking using the mechanical shutter or 20fps with the electronic shutter, and a simpler design and layout to make it even easier to use.

The Fuji X100V can be made weather-resistant when paired with the optional AR-X100 Adapter Ring and weather-sealing protection ring.

2020 marks 10 years of the Fujifilm X100 camera series, and with it a brand new model in the svelte, stylishly retro form of the X100V.

Starting with the original X100 model back in 2010, Fujifilm have diligently introduced a new version roughly every two years since, working their way through the X100S, X100T, X100F and now the X100V.

Each one has shared the same core characteristics of a large APS-C sensor and a 23mm f/2 fixed lens, and the new Fuji X100V is no different in either of these respects.

What has changed is the megapixel count, now up to 26.1 megapixels from 12.3 on the original X100, and the lens design, which has finally been updated with the addition of an extra aspherical element, resulting in the sharpest lens yet seen on the X100 series.

The new lens design has been enhanced for better resolution and lower distortion, whilst offering the ability to focus closely at 10cm from your subject with greater sharpness when shooting wide-open. A Super EBC coating has been applied to help suppress lens flare and ghosting.

Despite these improvements, it's still exactly the same size as previous lenses and is therefore still compatible with the legacy WCL/TCL conversion lenses, whilst retaining its internal 4-Stop ND filter.

As well as inheriting the very latest 26.1 megapixel X-Trans BSI CMOS 4 sensor from the X-T3 and X-Pro3 cameras, the new Fuji X100V also gains the very latest quad-core X-Processor 4 image processor. This familiar combination ensures that the X100V delivers very similar image quality to that found in the company's other flagship cameras.

Other new software features enabled by the latest processor include the addition of the HDR mode and Clarity and Colour Chrome Effects, all of which have already debuted on other Fujifilm cameras.

In addition, the X-Processor 4 introduces a number of other benefits that help to make the Fujifilm X100V the fastest and most versatile X100-series camera ever, including the ability to shoot bursts at 11fps with the mechanical shutter and 20fps with the electronic, or an even faster 30fps when applying a 1.25x crop in the special sports mode.

The new processor also enables the X100V to auto-focus at a luminance level of -5EV, whilst simultaneously increasing the number of phase-detection AF points to 117 from 91 on the previous X100F, covering a whopping 99% of the frame, again exactly the same specs as found on the X-T3 and X-Pro3 cameras.

The most recent AF algorithm that improves face and eye detection is used on the X100V. Fujifilm have also added the very useful focus limiter function that allows you to set a specific distance range within which the AF can work, potentially speeding up the auto-focusing system even further.

The Fujifilm X100V also gains the Eterna and Classic Neg film simulation modes that have recently made their debuts on Fuji's other flagship models.

The final major benefit of the new processor is a greatly improved video mode. Whereas the X100F only offered 1080p recording, the new X100V takes things to a whole other level, with DCI/UHD 4K recording available at up to 30fps with oversampling and no sensor crop, plus Full HD recording up to 120fps.

4K video can be recorded at 10-bit 4:2:2 via the micro-HDMI port to an external recorder or 8-bit 4:2:0 internally up to a maximum bit rate of 200Mbps in both 4K and Full HD, although there is quite a restrictive 10-minute recording limit. Other new video features include the additions of the Eterna profile and F-Log.

Note, however, that unlike most other Fujifilm cameras, the Fuji X100V doesn't feature image stabilisation of any kind, either optical or electronic via the lens or camera body, so you'll really need to mount it on a gimbal to obtain the best results when recording video.

Outwardly, the overall shape and size of the X100V is almost identical to the X100F, making it instantly recognisable as an X100 model - you'd be hard-pressed to tell apart all five models that have been released since the series launch in 2010.

If you choose the black and silver version that was supplied to us for this review, you end up with something that looks very similar to an analogue film camera, with the retro styling being a major selling point of the brand.

Despite this overall similarity, though, Fujifilm have been hard at work making further refinements to what was already a very intuitive design ethos.

In addition to the new lens that we've already discussed, the LCD screen on the rear has undergone a rather radical redesign.

Gone is the fixed screen of the previous models, replaced by a new 2-way tilting unit that makes it easier to shoot at both waist-level and whilst holding the camera above your head. It can't also be tilted out to the side, though, which would have been ideal for video use.

In order to smooth over any objections to the new tilting screen, Fujifilm have gone to great lengths to effectively hide it by making an incredibly thin screen (just 4.4mm) that sits flush against the rear of the camera. Indeed, if it wasn't for the slight indent and tab in the bottom left corner that's used for pulling it outwards, you'd probably think that the screen was still fixed in place, as on all the other previous X100 cameras.

In addition, the screen's resolution has been bumped up to 1.62M dots, versus 1.04M dots on the previous model, and more importantly, it offers touch capabilities for the very first time on this series, with the same touchscreen functionality found on the XPro3 and X-T3. Again, like the tilting screen, if you don't want to use this genuinely useful new feature, you can turn it off.

Another key feature of the X100 series that has been improved is the hybrid viewfinder. This long-standing feature now has the same optical module as the X-Pro3, with a frame coverage of 95% and 0.52x magnification, up from 92% and 0.50x on the X100F.

Similarly, the electronic viewfinder has been improved too, being slightly larger (0.5-inch vs 0.48-inch), having significantly more resolution (3.69M vs 2.36M dots), ever so slightly higher magnification (0.66x vs 0.65x ) and a faster refresh rate of 100fps than on the X100F.

The external design of the Fuji X100V is pretty much identical to its predecessor, the X100F, weighing in at a whole 9g more and being a couple of mms bigger in terms of its dimensions.

The hand-grip is ever so slightly chunkier, whilst the ISO value can be more easily changed by lifting up the dedicated dial on top of the camera, which then clicks into place before being rotated - on the X100F, you had to raise the dial and hold it in place whilst rotating it to choose a different ISO value. A small change, perhaps, but testament to the level of detail that Fujifilm have gone to.

On the rear of the camera is a new thumb-operated joystick instead of the previous 4-way navigation controller, a change that Fujifilm have adopted on all of their recent cameras. This joystick can be used to set the AF point and navigate the menu system.

For the very first time on an X100 camera, the Fuji X100V is weather-sealed, something that further adds to its versatility as a go-anywhere street camera. There is quite a big catch, though - whilst the camera body is fully weather-sealed out of the box, the lens isn't, requiring the purchase and fitting of the optional PRF-49 protective filter with the AR-X100 adapter ring to fully protect it from the elements.

Battery life has been improved despite using exactly the same NP-W126S battery as the X100F, up from 270/390 frames when using the EVF/OVF to 350/420 on the X100V. While both cameras can be charged-up via USB, the X100V uses the newer Type C standard which also allows it to be used as a port for a external headphones, using an adapter.

The single SD memory card slot that's housed in the batter compartment on the bottom of the camera only supports the slower UHS-I standard.