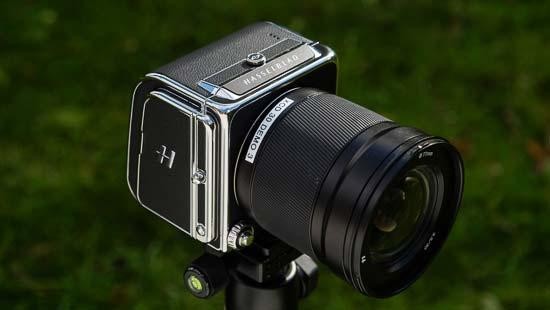 The Hasselblad XCD 30mm F3.5 is a wide-angle prime lens designed for the company's 'digital medium format' cameras that includes the Hasselblad X1D II 50C and the new Hasselblad 907X 50C. We have used the latter camera with the lens for this test.

Digital medium format is not strictly the same as film medium format, with the sensor area of Hasselblad's compatible cameras measuring 44x33mm. There's a 0.79x magnification, meaning the lens has an equivalent 24mm focal length (to the full frame 36x24mm sensor format).

Depth of field is also different, with the maximum f/3.5 aperture providing an equivalent depth of field of around f/2.8. We would typically associate a 24mm f/2.8 (equivalent) lens like this with landscape photography. Only the XCD 21mm f/4 lens offers a wider angle of view in the Hasselblad line up.

In the Fujifilm GFX medium format series there is a direct competitor, the GF 30mm F3.5, which we tested recently. The list price of Hasselblad's lens is £3,588, which is more than twice the money you'll need for the Fujifilm lens, and indeed Pentax's closest lens, the 35mm f/3.5.

If you've used one of Hasselblad's XCD lenses then you'll be right at home with them all. There's a similar design and build quality, including a built-in 'leaf' shutter (rather than the shutter being in the camera).

There's also a high expectation on image quality too - XCD lenses typically excel in virtually all areas. So will the Hasselblad XCD 30mm F3.5 deliver too? Read on to find out.

The Hasselblad XCD 30mm F3.5 is one of the smallest and lightest lenses in the XCD range. On the outside, you'd be hard pressed to tell the difference between this and the XCD 21mm f/4 lens.

Both have the same diameter, 77mm lens thread, though the 30mm F3.5 lens is fractionally lighter at 550g and shorter at 88mm. There's the distinct XCD minimalist look, an all-black exterior with a ridged manual focus ring.

This is an all-metal lens so it has that reassuring weight to it. Paired with the Hasselblad 907X 50C camera you're looking at around 1.3kg - that's about the same weight as an equivalent full-frame DSLR and lens pairing.

We really like this camera and lens pairing, Hasselblad does 'in-the-hand' really well.

Asides from that manual focusing ring (that offers a smooth rotation), there is not a single switch or control. While it may (unsurprisingly) lack optical stabilisation, there is more inside this lens than its 11 lens elements in 10 groups.

Like all Hasselblad XCD lenses, there is a built-in leaf shutter. This means that there is no shutter in the camera. Leaf shutters incur less vibration than in-camera mechanical shutters, plus they are quieter too.

Compatible with such a high-resolution cameras, the leaf shutter is a win because unwanted shake will impact image quality more clearly.

You also get flash sync at any shutter speed, and on hasselblad's digital medium format cameras there is a maximum shutter speed of 1/2000sec. Other shutter types typically max out at 1/250sec for flash sync.

Arguably the Hasselblad XCD 30mm F3.5 lens is less likely to be used with flash than other more telephoto options, but that versatile handling is appreciated - especially with the maximum aperture setting where exposures might otherwise blow out with flash in play.

We expect, like us, most users to take full manual control of their Hasselblad camera and lens for landscape photography, including exposure and focusing.

We've said it before, but the most intuitive method for manual focus is to employ focus magnification. Simply tap the camera's touchscreen where you would like to focus for a clearer 100% view.

Otherwise, manual focusing is actually quite tricky. There are no focus distances marked on the lens, nor does on-screen focus peaking offer much help with this wide angle format. We've found on numerous occasions that significant areas of the frame are highlighted with peaking whether they are in focus or not, so we wouldn't rely on it.

If you don't mind the focus magnification route for manual focus then there's no cause for complaint. Otherwise, you may feel a little limited.

Focusing is internal, meaning the Hasselblad XCD 30mm F3.5 lens does not physically extend in length through the various focus distances. There is focus breathing - meaning a shift in the image area as you move from close to infinity focusing - but as a wide angle lens it's not too bad.

Focus breathing alters composition so you'll need to nail focusing before any final adjustments to framing. Given this is a wide angle lens it is possibly less of an issue because there is more wiggle room with composition.

Should you opt for autofocus, then the XCD 30mm F3.5 lens performs just like the 21mm f/4 lens - it's one of the quicker XCD lenses. In context though, autofocus speed in Hasselblad's digital medium format is sluggish - being the contrast detection type and limited to single point AF only.

In favour of autofocus performance, we have found that once focus has been acquired, it is usually very reliable. Still, if you're shooting in low contrast light, the system can struggle to obtain a sharp focus at all.

More of a comment on the cameras that this lens is compatible with, but we have always enjoyed how this Hasselblad camera series handles for changes to exposure and the versatility with shutter speed selection.

There's no fiddling around with bulb modes and cable releases - the camera can select any shutter speed between 1/2000sec and 68 minutes. So if you regularly fiddle with aperture or experiment with different shutter speeds, the Hasselblad camera and lens combination handles like a dream.

Like other similar lenses in the range, the XCD 30mm F3.5 features the common 77mm thread to attach lens filters - these filters are easy to come by and do not cost the earth like bigger equivalent can.

For its main purpose of static landscape scenes, the Hasselblad XCD 30mm F3.5 is a brilliant lens and one of the more useable in the XCD range.

If you're going to see chromatic aberrations anywhere when using this lens, it's most likely in high contrast detail in the corners of images made using the maximum f/3.5 aperture setting. That's the real test. We've found none even in the unedited RAW format - check out the sample images below that have pushed this lens performance hard.

And if you are using the lens with a closed down aperture for good depth of field in your pictures, certainly chromatic aberration is of no consequence.

There is also the matter of longitudinal chromatic aberrations (LOCA) - that's aberrations in out-of-focus areas. Again, we cannot see any.

Light fall-off, which the difference in brightness between the centre and the edges of the frame and is also known as vignetting, is well controlled by the Hasselblad XCD 30mm F3.5 lens.

At f/3.5 and f/4, pronounced light fall off can be seen in uncorrected raw images. There is a significant reduction of light fall off at f/5.6 where it is fractional at most, and then by f/8 and beyond we can't really see any at all.

If there is any image quality area where the Hasselblad XCD 30mm F3.5 lens suffers it is through mustache distortion - that's a more defined version of barrel distortion with curvature in straight lines in the central top and bottom parts of the image area.

Should you use Hasselblad's Phocus editing software, then mustache distortion is corrected automatically and we really cannot see this correction incurring any compromise on final image quality.

When shooting directly towards sunlight, we have at no point experienced ungainly lens flare and ghosting. In the most extreme cases there is a tiny bit of ghosting, but other similar lenses would be affected way more in the same scenario.

Whatever Hasselblad is doing to control flare in its XCD lenses, it's doing it very well - quite possibly a market leader. It's quite important really - when lens flare is not controlled properly there is a reduction in contrast, plus all kinds of unpredictable effects that can be very hard to remove in post.

And if the light source is included directly in the frame, sunstars (light rays) are crisp and defined. Like with the XCD 21mm f/4 lens, there is at times a 'doubling' effect in those individual sunlight rays, but overall sunstars look lovely. In both lenses, you can count eight clearly defined light rays - it's almost a signature look.

With a wide angle of view and a minimum focus distance of 0.4m it is not possible to get close to subjects with the Hasselblad XCD 30mm F3.5 lens. The maximum reproduction is 1:9.6 (just under 0.1x approximately), that's one tenth real size. This is not a macro lens and other similar lenses are able to get closer to subjects and are therefore more versatile in this area of photography.

We've taken identical close up pictures with the Hasselblad XCD 30mm F3.5 at f/3.5 up to f/8 with dappled light as the blurry backdrop and made observations about bokeh in all cases.

At f/3.5, bokeh is smooth, rounded and with no LOCA. Tick, tick, tick. In the corners that rounded shape is more cats eye - we'd expect that really.

Stop down even to f/4 and the rounded shape is evolving to an octagonal shape (there must be eight aperture blades in this lens - that's not a detail readily available). The shaping is subtle, but there.

Use the f/5.6 aperture and those eight aperture blades are clear in bokeh - octagons everywhere. There's still a smoothness in those out-of-focus areas and no LOCA, but the shaping isn't great.

Adding some context - bokeh is perhaps not high on the list of desired attributes for this lens.

In order to show you how sharp the Hasselblad XCD 30mm F3.5 lens is, we are providing 100% crops on the following page.