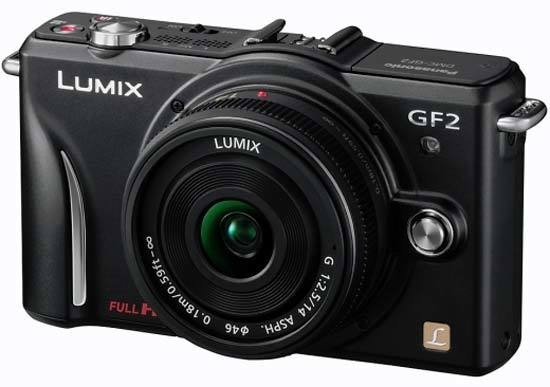 The appeal of the Panasonic Lumix DMC-GF2 is definitely in the eye of the beholder, more so than most cameras that we've reviewed recently. While current GF1 owners will most likely bemoan the simplification of the control system in favour of a touchscreen system, compact camera owners looking to upgrade to the new breed of DSLR-like models will no doubt be attracted by the smaller design, cutting-edge interface and pared-down design. The GF2 is definitely not a natural successor to the GF1 that it replaces, but that doesn't mean that it isn't a great camera in its own right that's well-suited to its new target audience.

The drive towards smaller and smaller bodies and lenses in the fledgling Compact System Camera market is similar to the megapixel wars that have dominated compact digicams until very recently. While the Panasonic GF2 isn't as small as the Sony NEX system if you compare the bodies side-by side, when you factor in the fact that the GF2 has a built-in flash and in particular the tiny Micro Four Thirds lenses, both are very similar in size and weight. Indeed, the GF2 with the 14mm lens fitted is smaller than the likes of the Canon Powershot G12 and Nikon Coolpix P7000, which only have much smaller image sensors (but admittedly bigger zooms) and it's almost as small as Panasonic's own LX5 premium compact.

This diminutive design has been achieved by the implementation of that potentially controversial touch-screen system and the accompanying removal of many of the GF1's buttons, dials and switches. While you can still access most of the camera's main features via its remaining external controls, it is undoubtedly trickier than on the GF1. Importantly, though, you'll be missing out on some advanced functionality that GF1 owners can only dream about if you ignore the touchscreen, chief among them the ability to focus on your subject simply by tapping them onscreen, even when shooting movies. While the polished and intuitive touchscreen interface still won't be to everyone's tastes, it should help the GF2 appeal to a wider audience, helping to expand the appeal of Compact System Cameras further.

The other major change, an upgrade to 1080i Full HD movies, will likewise also braden the GF2's appeal, especially given that the move to high definition video has swept across the entire photographic industry in the last year. It now sits just behind the flagship GH2 in terms of quality, although there are a few significant missing features, most notably the lack of an external microphone socket and the inability to change the aperture and shutter speed during recording. We also missed the remote control socket which has been inexplicably dropped from the GF2, making timed exposures an unnecessarily hit and miss affair.

In terms of still image quality the GF2 uses the same sensor as its predecessor, so the performance is virtually indistinguishable. Noise performance is very similar, with a very usable range of ISO 100-800 and good results even at 1600, although the fastest settings of 3200 and particularly the new 6400 setting aren't really worth using, so the GF2 still can't quite rival a decent DSLR camera with an APS-C sized sensor in low-light. Colours are accurate when using the default Standard setting, with lots of scope to adjust the JPEG output to suit your own tastes, and the auto white balance is spot-on in most lighting conditions. The diminutive pop-up flash is OK for use as fill-in, the ability to make bulb exposures up to 4 minutes long will please night photographers, and anti-shake via compatible lenses helps to keep things sharp in low-light.

Cheaper than the GF1 was on launch, the new DMC-GF2 takes Panasonic's compact system cameras in a new direction, aiming to appeal to a wider base of users who are looking for DSLR-like results from a simpler and more compact design. While it's certainly not a logical upgrade for current GF1 owners, the GF2 deserves to make a big leap forward both for Panasonic and for the Compact System Camera market as a whole.