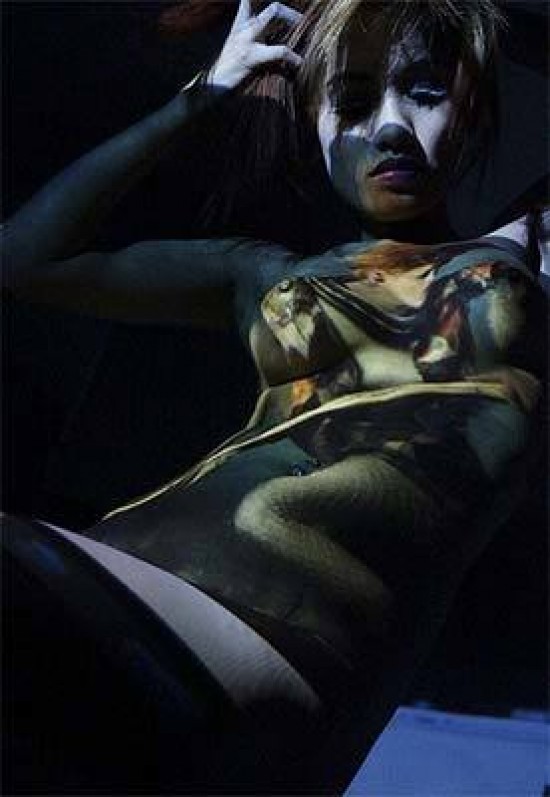 Whereas Mueller’s frame with a floral projection has the model seated in a soft curve elegantly posed with a simple rose projected on her torso and her body blacked out. Both photographers have interacted nude models with their projection but have created a very different chemistry between projection and model as well as projection content, further exemplifying the versatile and exciting nature of projection art photography.

An example of a more abstract use of projection art photography can be found in the work amateur photographer Hannah FitzGerald who offers a very different approach to projections. FitzGerald projects quite intricate high contrast black and white patterns (mostly floral) over nude models’ bodies. The contrast against the black backgrounds makes the bodies stand out dramatically and appear statuesque, especially as FitzGerald interestingly cuts the head and lower legs from the shots filling the frame with just the body. The result creates an abstract, slightly unsettling yet stunning image. 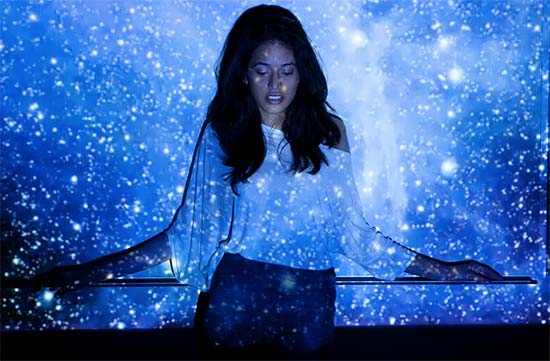 Another ‘style’ of projection art photography uses full colour images as a projected ‘background’. Russian Photographer Nikolay Glazunov created a series of images called Alexandra in which he projected photography, paintings and 19th Century art to create a unique connection between flat images and scenes with the dimensional and interactive model. Interestingly the model becomes a part of the scene as though she was meant to have been painted in and yet we know that she is removed from the original image. This creates a stunning juxtaposition which is also a little unsettling as though the lines of reality or fact and fiction have been blurred.

The Final Photographer whose projection art photography is worth looking at, especially if you are looking at fashion photography is Nadav Kandar. His shoot for the Puma ad campaign is particularly impressive and is a great example of projection art within fashion. The ad campaign line was ‘light injected footwear’ with the shoot featuring models in underwear barely visible under projected clothing. Similar to John French’s images in the 60s, this shoot develops the use of ‘clothing’ projection to high fashion. The key difference with Kandar’s shoot is the inclusion of themed backgrounds, such as a beach, in an ordinary room. Projection art photography can place a model in any location and in any clothes, and yet the projection juxtaposes against the mundaneness of the standard room with wallpaper and household furniture. It is a very interesting campaign excellently created and executed, and possibly represents a direction that projection art photography may begin to take.

Projection art photography is a developing and expanding form of art. Especially as projectors are now becoming readily available at a reasonable price and specification. Selecting the right projector for your needs is important, especially when it comes to colour. 3LCD technology, pioneered by Epson manufacturer, offers colours three times brighter than the previous 1-chip DLP projectors. By separating white light into red, green and blue and reflecting them through three individual panels instead of one and then recombining the light, 3LCD technology ensures that no light is lost resulting in vibrant, sharper and brighter colours. It also eliminates the ‘rainbow’ effect that can occur with 1-chip DLPs in which black and white contrasts contain shadows of other colours. Having a ‘rainbow’ effect on your projection may ruin the effect that you are aiming for.

For a photographer owning a projector is a very useful and versatile piece of equipment. From projection art projects and displaying your portfolio, to a very large screen for retouching and looking at whole shoots, projectors could become essential to photographers. Try something new, create, inspire and innovate your own projection art photography.