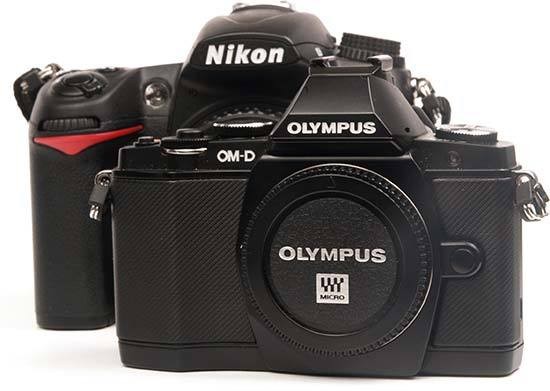 The Olympus OM-D E-M5 is one of 2012's most talked-about cameras and the object of desire for many photographers. It's also one of the few cameras to have earned our highest 'Essential' rating. In our full review we called it “the best Olympus compact system camera to date, and also a strong contender for best compact system camera full stop.” With our impressions and experiences being so overwhelmingly positive, we have decided to pit the E-M5 against one of the best advanced dSLR cameras of all time - the Nikon D7000.

Why the D7000? Firstly because it boasts one of the most highly regarded sub-frame sensors, one that's found in a number of other cameras, including both SLRs like the Sony A580, Pentax K-5  and K-30, and CSCs like the Sony NEX-5N. Secondly because the two cameras tend to compete in the same price segment. As of writing, the Olympus OM-D E-M5 retails for around $1000/£1000 without a lens, while the Nikon D7000's body-only price is $1100/£800. And thirdly because the Nikon D7000, as “old” as it is, is still Nikon's number one enthusiast/prosumer/semi-professional camera and as such, a worthy opponent for the new Micro Four Thirds flagship.

The most obvious difference between the two cameras is their size. Even though the Nikon D7000 is not even close to being the biggest DSLR in Nikon's line-up, the Olympus OM-D E-M5 still looks - and feels - positively tiny in comparison. This has obvious benefits for anyone wishing to take their camera along on a strenuous hike or simply work discreetly and unobtrusively. Having said that, the smaller size has its downsides too, and the E-M5 is a perfect example of that. 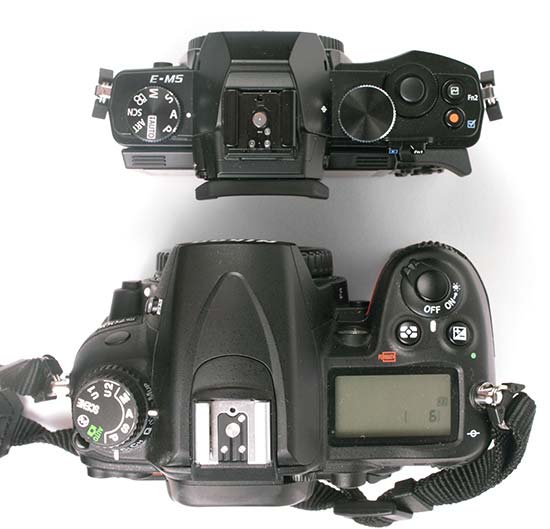 With both cameras being aimed at the serious photo enthusiast, physical controls are in abundance on both models. This, in and of itself, is a very good thing. Both cameras have dual control wheels, traditional mode dials and a number of direct-access buttons. However, while the Nikon D7000 is very comfortable for anyone with medium to large hands and/or longish fingers, the OM-D E-M5 is quite simply too small for most adults. In addition, some controls - like the all-important shutter release or the on/off switch - are in the wrong place from an ergonomics point of view. Whereas most of these problems can be addressed by outfitting the camera with the optional two-part grip (HLD-6, $300), button clutter and the small size of the individual controls remains an issue. There is no getting around the fact that the Olympus has tiny buttons compared with the Nikon, where each button, lever and switch is of a decent size. And not only are the Nikon's controls bigger, there's more of them too, making adjustments faster and more straightforward.

That said the touchscreen controls of the E-M5 do make up for this, at least partially. Speaking of the screen, the fact that it's articulated lends a bit of extra flexibility to the Olympus. It comes in especially handy when shooting from high and low angles or recording a video clip.

Both cameras are extensively customisable to suit your tastes, and both are encased in sturdy magnesium-alloy bodies that have environmental seals allowing them to be used in wet or dusty locales (if fitted with a similarly weather sealed lens). The D7000's battery is rated for nearly three times as many shots as the E-M5's but actual power consumption will depend heavily on how you use these cameras.

As noted above, the Olympus OM-D E-M5 is a much more discreet tool than the Nikon D7000 - and not only because of its smaller size. Like all compact system cameras, the E-M5 lacks a reflex mirror, which means it's considerably quieter when taking a picture. Not that the D7000 is particularly loud - in fact its mirror is a lot less noisy than most other SLRs out there - but it still can't compete with the Olympus in this area. Lacking the electronic shutter option of the newer Panasonic G5, the OM-D E-M5 is not completely silent but the sound of its mechanical shutter - and that of the motor used to cock it - is very effectively muffled meaning your subject must be very close to the camera to hear it, even in a quiet environment. This means the E-M5 is better suited to all photographic genres where unobtrusiveness is a key requirement, including street, stage, church, candid and baby photography to name but a few. (As a side note, the in-body image stabiliser of the Olympus makes a constant humming sound whenever the camera is turned on - this can be mildly annoying to the photographer, especially in the first few days of using the camera, but is inaudible to the subject.)

For a sub-frame DSLR, the Nikon D7000 has a very nice pentaprism viewfinder - it's fairly big and bright, with 100% frame coverage to boot. The fact that the auto focus points are not permanently marked on the focusing screen and only light up when needed means that viewfinder clutter is thankfully avoided. A compositional grid can be called up via a custom function.

The high-resolution Epson Ultimicron EVF in the Olympus OM-D E-M5 is again pretty big, very sharp and generally a joy to use (and I'm saying this as someone who has always preferred optical viewfinders to OVFs in the past). The apparent size of the two finders is broadly similar, though the aspect ratio is of course different. The amount of overlaid information in the E-M5's finder is potentially huge but it's user controllable. For accurate manual focusing you can magnify into the live view feed regardless of whether you're using the EVF or the rear screen. Unlike some Pentax/Ricoh and Sony cameras, the Olympus OM-D E-M5 does not offer a focus peaking feature.

In dim light the EVF “gains up”, which means that in these situations I found it easier to frame my shots with the E-M5 than with the D7000.

Comparing the auto focus systems of these two cameras has turned out to be one of the most exciting parts of this project - and one that has led to some surprising conclusions.

Let's start with the basics: the Nikon D7000 has an AF module with 39 tightly packed focus sensors as seen in the image below.

While on paper a 39-point auto focus system sounds impressive, perhaps even overkill to most people, there are two main drawbacks to its implementation in the Nikon D7000. One of these is that a large part of the frame is left un-covered by the AF points (for example, the intersection points of the rule-of-thirds guidelines - not shown here - fall just outside the area covered by the 39 focus sensors). The other issue is that only the 9 sensors in the very centre of the frame are cross-hatched - all the others are line type sensors, with all the drawbacks this entails. You can, thankfully, manually select any of the 39 AF points but choosing one of the off-centre points is always a bit of a gamble - if you're trying to focus on a vertical detail and the chosen AF sensor is only sensitive to horizontal ones you're likely to experience focus hunting and an inability to lock focus. Likewise, these off-centre AF points are not terribly reliable in low light either. Of course I'm not saying the Nikon D7000's AF module is not capable of delivering great results - it is - but if you are in the habit of picking your focus points manually you're almost guaranteed to run into these problems sooner or later.

The Olympus OM-D E-M5 has a contrast-detect auto focus system with 35 user selectable focus points. Although 35 is less than 39, the Olympus's AF points offer much better frame coverage and crucially, there's no difference in their sensitivity - the peripheral focus points behave in exactly the same way as the central ones. In actual use, we have found the E-M5's AF system to be more reliable than the D7000's, at least when focusing on a static subject using an off-centre focus point, particularly in low light. As far as focusing speeds are concerned, the OM-D E-M5 is at least as fast as the D7000, if not faster (note that this also depends on the lens being used).

Selecting an AF point is simple, fast and pretty straightforward with both cameras. On the Nikon D7000, you simply use the eight-way controller for this, with the active focus point highlighted in the viewfinder. On the Olympus OM-D E-M5, you can either use the four-way pad or specify the desired focus point by touch. This is the fastest and easiest method, although it only works when using the rear screen for framing (the E-M5 lacks the Panasonic G5's novel Touchpad AF feature which allows you to move the focus point area with your finger on the LCD while you're looking through the EVF). 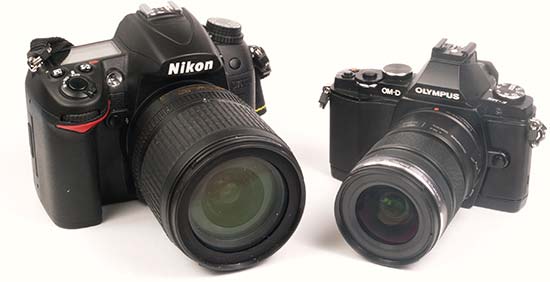 One area where the Nikon D7000 - and SLRs in general - seem to be superior is keeping a moving subject in focus. Now, with the 12-50mm f/3.5-6.3 lens we've been able to achieve a good keeper rate with the E-M5 set to C-AF and a 4fps burst mode (at its maximum continuous shooting speed of 9fps the E-M5 does not offer focus tracking after the first frame); but it was arguably not too difficult for the camera as almost everything was in focus because of the slow maximum aperture of the lens. We'd love to repeat this test using a fast telephoto lens like the new M.Zuiko 75mm f/1.8 when we get one to review. At any rate, the Nikon D7000 offers a wider range of AF Area options for shooting with continuous auto focus, including 9-, 21- and 39-point Dynamic Area and 3D tracking. Additionally, the inherent characteristics of a phase-detect auto focus system make it better suited to predictive auto focus.

The above holds true for shooting with the eye-level viewfinder only. If, for whatever reason, you need to use the rear screen for framing, the Nikon falls behind as its Live View AF is much slower than its phase-detect AF system. By contrast, the OM-D E-M5's auto focus system works in the same way regardless of whether you are using the EVF or the rear screen.