How a Magnum Photographer Shoots for National Geographic 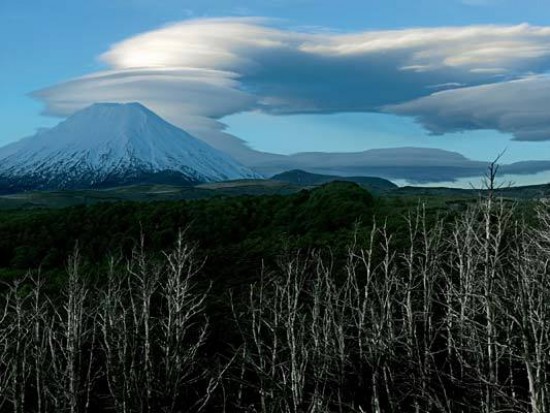 Written and photographed by Stuart Franklin.

I photographed Tongariro National Park and the adjoining Whanganui river for National Geographic’s July 2009 issue during the austral winter of 2007 and the summer of January 2008. It took a while to get into the magazine, but this sometimes happens. For someone who loves the outdoors and hiking (or tramping as it's known there) this was a dream assignment. The Tongariro Crossing is one of the world's great one-day hikes. For us, it was especially exhilarating in winter when, after an arduous clamber up steep rocky terrain, we ended up on a flat expanse where we changed into crampons for the rest of the climb. Visibility can change in an instant from total white-out to amazing views of the adjacent volcanoes. In winter it's certainly worth hiring a guide and we were lucky with the team from 'Adrift' - great company and very professional. The other thing that can change is the wind. Suddenly you can be almost blown off your feet by the gusting blasts around Red Crater. Since most of my photography was done on an Ebony 5x4 view camera with a heavy duty tripod, finding low wind levels at the summit, was a major element of the challenge. I shot on 5x4 transparency because I wanted the very best quality; where I couldn't use 5x4 I used a Hasselblad 39 megapixel digital camera, especially valuable for the aerials.

The main picture was shot just emerging from the southern beech forest with Mount Ngauruhoe in the background. Mount Ngauruhoe was used as Mount Doom in the Lord of the Rings movies. Everything happened quite fast. I was struck by this amazing lenticular cloud (normally a sign of high wind velocity) over the peak and quickly set up the Hasselblad, trying to capture both the snow-clad mountain and the forest below. It was a lucky moment. But when you are out hiking a lot, there are always these moments: it's just you never know exactly when they'll happen. 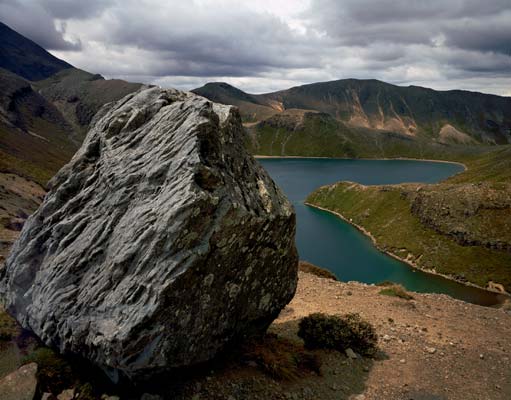 The second picture shows a strange sculptural boulder in front of the calm glacial Upper Tama lake. I became fascinated by this boulder, all its marks and scourings. It reminded me of something ritualistic, like Stonehenge. I tried to photograph it with the 5x4 camera, so that it blended into the skyline behind. I wanted to play on the illusion of 3D so the rock seemed to come out of the picture. I used camera movements to ensure the background and foreground were totally in focus. That's one big advantage of 5x4, although this can also be done to a lesser extend with some shift lenses. The film I was using was Fuji Velvia 50 and sometimes 100 - always the "quickload" version. I also took time to make polaroids before the final picture. That's something that won't be possible anymore! 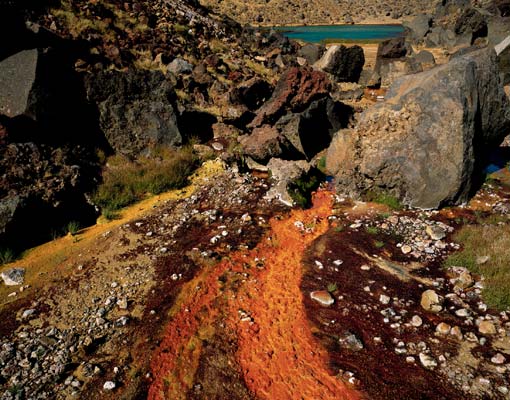 The third picture was shot with one of my favourite lenses - the 90mm Schneider lens on 5x4. The aim here was to show the amazing volcanic colours around the crater lakes of Tongariro. I hadn't seen these orange colours before. It was a raw and beautiful scene and we spent most of an afternoon getting this picture right. We worked as a team of three, carrying all the gear between us - two camera kits, a heavy duty tripod, film, and - most important - stuff to munch on. They have great jelly candy in New Zealand that kept us going on the long day's hiking. I've forgotten what it's called: I just remember the dinosaur shapes! 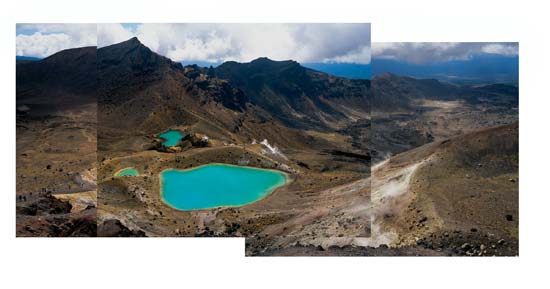 The fourth picture is, as you can see, three photographs fused together to form a panoramic. It took several trips over the Tongariro Crossing to get the right conditions for this picture. I wanted to see the steam from the venting volcano, the emerald lakes, the hiking trail to the left going off towards the tussock grass, and the desert to the right. I'd seen a lot of pictures of the 'emerald lakes' but I wanted to set them in a bigger geographical context. Also, I wanted to show the hikers to give a sense of scale. I have to confess that I'm not an expert at this kind of panoramic photography, but I did learn quite a bit in the process. That's the thing about photography. No matter how long you've been doing it, there's always more to learn. 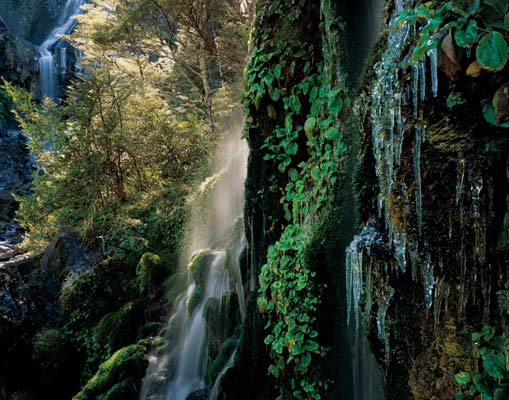 The fifth picture was just a scene I came across by chance. Well, I have say that it's through serendipity that I get most of my pictures. We were just hiking through the Waitonga Falls one winter morning. There was a lot of mist about and the small lakes were iced over. At the base of the falls I notice these icicles and great light coming through. The picture was taken using the Ebony 5x4 camera with just one sheet of film. Now those afficiandos of HDR photography will know why I've just said that. To be honest, if I shot this picture today, HDR is probably the way I'd go, but at the time I had limited confidence or experience in the technique. Having said that this single frame may have worked out better. As I said before, the joy of photography is that every day there's something new to learn.

Stuart Franklin was born in London in 1956. Having left school at 16, he went on to study photography at West Surrey College of Art and Design. His photographic career began when he started to work for the Sunday Times and Sunday Telegraph Magazine in London and later with Agence Presse Sygma in Paris. During his time at Sygma (1980–85) he absorbed the skills of news photography, and also followed Henri Cartier-Bresson’s approach to photography; as he puts it, ‘curious, gentle, surreal with beautiful compositions – his work influenced just about everything I attempted.’

In his words, ‘At Sygma photographers arrived from Algeria, Iraq and Lebanon unloading their Domke bags and their stories. Later I felt confident enough to tell my own. I covered the 1983 Nigerian exodus, the Heysel Stadium disaster, the Beirut bombing of the French and American bases, the civil war there and in Sri Lanka, the conflict in Northern Ireland and finally the 1984–85 famine in Sudan.’

In Khartoum Stuart shared a flat with Sebastião Salgado for a few weeks. Salgado worked with Magnum Photos in Paris – founded by Cartier-Bresson, David Seymour, Robert Capa and George Rodger. Stuart was invited to join in the summer of 1985, and has been a full member since 1989, serving most recently as the agency’s president, a post to which he was elected in 2006.

It was during the course of 1989 that Stuart took his acclaimed photographs in Beijing’s Tiananmen Square, where a demonstration for freedom ended in a massacre. Thereafter he began to move away from news into magazine feature photography. Between 1990 and 2004 he photographed about twenty stories for National Geographic Magazine.

During this time Stuart decided to pursue a better theoretical understanding of some of the issues he confronted, by embarking a period of academic study in 1997. He graduated with a first class degree in geography from Oxford University, and went on to complete his doctoral thesis there in 2002. In 2005 he undertook the series of large-format photographs of Europe’s changing landscape that has led to his most recent book, “Footprint: Our Landscape in Flux” (Thames & Hudson, 2008).

During 2009 Stuart will being continuing with two projects in the UK: ‘Overground’ supported by Transport for London, and ‘Scotland’s Transitional Landscapes’ supported and funded by the Scottish National Galleries. Additionally, Stuart will be travelling in Mali and the Middle East. In the Middle East Stuart will be working on co-curating the Noorderlicht Photo Festival 2009. “Footprint” will be exhibited in Cannes during the Sony Photographic Awards.