How to Master Panning 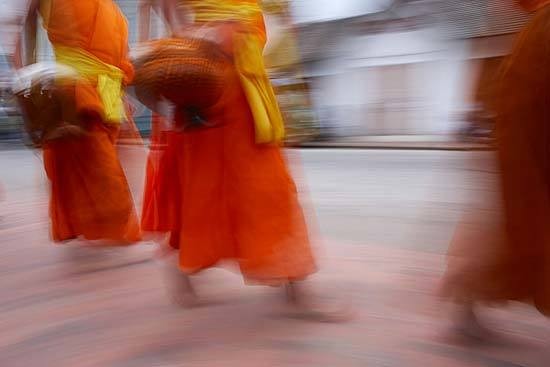 Main Image: The procession of monks at dawn through the town to collect gifts of food, Luang Prabang, Laos

We'd been waiting for two hours, intermittently bombarded by promotional material hurled from passing cars, shifting and crouching on the verge, waiting, waiting as the excitement built. Helicopters overhead suggested they were approaching. More cars, more gendarmes on motorcycles, but still no riders. Another photographer walked by and gave me a look that could kill at 50 metres. Sigh. The study of the body language of photographers working the same patch could occupy psychologists for years.

Finally, behind a phalanx of cars, the leader of the stage burst into sight. Colour, speed, action; the next ten minutes passed in a blur, literally, as I panned relentlessly as the peloton surged towards Revel. I don't remember actually seeing the Tour de France pass; it was just a fleeting blur in the eyepiece. Pick up a rider and lock on to him, expose as he draws level, check the monitor to check the blur factor, adjust the shutter speed and pick another rider, start panning and thwack! I've just been struck by a flying half full water bottle, discarded by one of the lycra clad riders as he forged past.  And then they were gone, and that was it. Did I manage anything worthwhile? I was just getting into the swing of it. Can't we do it all again? 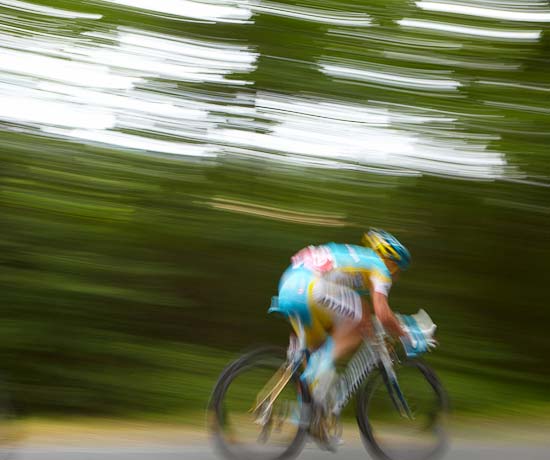 Stills photography is by definition, well, still; a frozen moment in time. I could have shot these speeding cyclists with a fast shutter speed to freeze their movement, its one approach. But I was gobsmacked by the pace of these guys, when you consider just how far they'd rode in the last month the Tour really is a staggering feat of endurance. Conveying just how fast these super fit riders were pedalling through the Lauragais paysage was the challenge, and to do that I needed to get my camera on the move. Panning is a basic photographic skill used to convey speed and motion, one that's well worth understanding, practising and experimenting with. Life is a blur anyway, we might as well convey that in our photography. 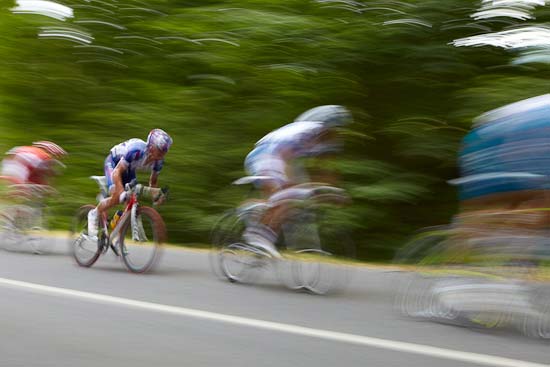 Quite simply panning involves moving the camera during an exposure to keep pace with a passing object. The resultant picture records the moving subject as sharp whilst all around is a streaky motion blur. Used to convey speed it is an essential skill for the likes of sports photographers. Mark Webber's Red Bull flat out and powering through Eau Rouge at 190mph shot with a shutter speed of 1/2000 sec looks as if it could be parked. All is sharp, crisp but sterile; there is no impression of speed. Slow the shutter speed to 1/125th sec whilst panning and the resultant streaky background gives some idea of his velocity. But it's not easy; these are the skills with which pro photographers earn their bread and butter. 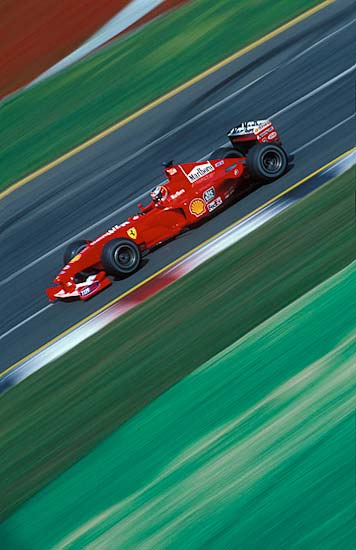 Let's not get fixated on speeding sweaty sports people though; panning can be used to convey motion in all sorts of situations. And beyond the notion of speed it's a creative technique that can add an almost impressionistic feel to compositions where the subject is ambling along at no more than a sedentary Sunday afternoon stroll pace. From the streets of Hanoi to the Bolivian altiplano and the alleyways of Morocco I have used panning to convey bustle and activity. It's fun, do it for the first time and a whole new world opens up. So let's look at the essentials a photographer needs to consider when panning; speed, technique and backgrounds. 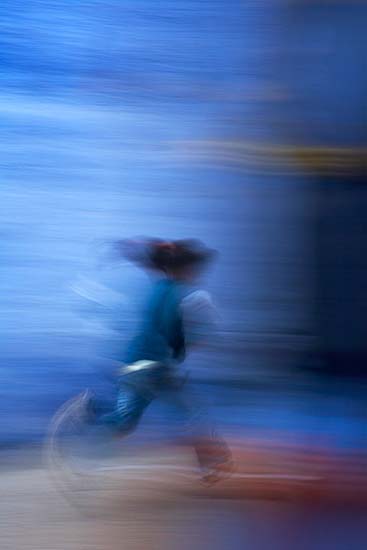 People passing by, street scenes in the blue walled town of Chefchaouen, Morocco.