How to Take Photos in Extreme Cold 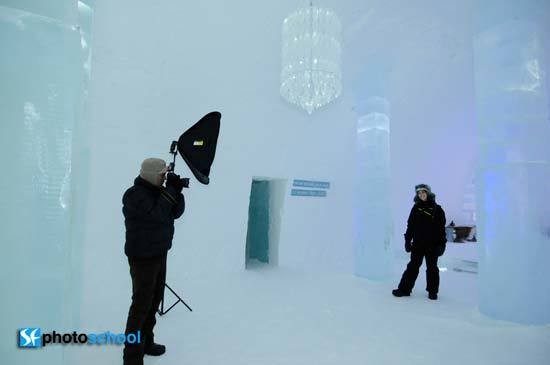 Uzair Kharawala of SF Photo School shares his experience of his amazing trip 250km above the Arctic Circle. During this trip he shot a wedding at the world famous Ice Hotel and photographed the Northern Lights at extreme high ISOs with the Nikon D3s.

One of the most exciting and challenging photographic shoots I've ever done was during a recent trip to Lapland, Arctic in Sweden, which is well about 250kms north. The trip came about when I was booked to photograph a wedding at the world famous Ice Hotel in Sweden. This was roughly the same time as the Nikon D3s was launched and was the perfect opportunity to test the camera for its high ISO capabilities in such low light and extreme conditions with temperatures dropping as low as -30C.

I was especially excited about the use of the video on the D3s. Initially, I wasn't too keen about video on DSLR cameras when this feature was first introduced, however, I now love it and am starting to enjoy it more and more. Prior to my visit to Sweden, I did photograph a wedding here in the UK with the D3s and the image quality at ISO 10,000 and 12,800 was stunning, so I wasn't too concerned about the low light situation over there.

The trip involved photographing a pre-wedding shoot and the wedding itself, a dog sledding tour on a frozen river and through the wilderness around Jukkasjarvi, and a 4 hour Northern Light tour on snow mobiles and staying in the 'cold accommodation' for a night at the Ice Hotel. Yes, I did sleep in a cold room at The Ice Hotel and am still here to tell the story. In fact, you get a diploma if you wake up alive in the morning!  This was a fairly packed schedule within a 4 day trip to say the least. 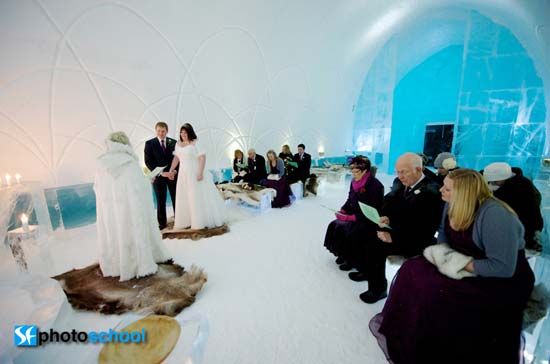 The wedding took place in the Ice Chapel which was a traditional Swedish ceremony and took about 30 minutes or so. The warmest temperature inside the chapel and the Ice Hotel is no warmer than -5C which is considerably warmer than the temperature outside. The coldest I experienced during this trip was -29C. The wedding party then headed off to the Ice bar for some drinks, then the family group shots, then after the guests have headed off to the 'warm bar' the shots of the couple and finally the wedding breakfast. The whole wedding takes no longer than about 2 hours or so. Unlike a traditional UK wedding of say, 8 hours, there is even more pressure on being organised and getting the shots which I've been paid for. 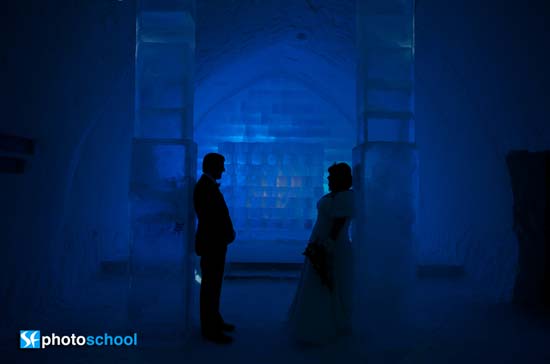 My biggest concern was the batteries in the camera and I've got to say that I did not need to change the batteries once during any shoot we went out to do. They pretty much lasted all day long.

Photographing inside the Ice Hotel was extremely challenging. The easy way would have been to put the flash on the hot shoe and fire away all day long. But that's not what I did. I do use the flash a lot but not on the hot-shoe of the camera. Flash is one of the most creative pieces of kit you have in your camera bag. Use it correctly and you'll get amazing results. I place it on a light stand and either use an umbrella or a Lastolite Ezybox. These are easy to carry and go with me everywhere. I had the new 80x80cm Ezybox which I used for the group shots with the SB900 flashgun. Balancing the ambient light with flash is the key to getting really good shots. 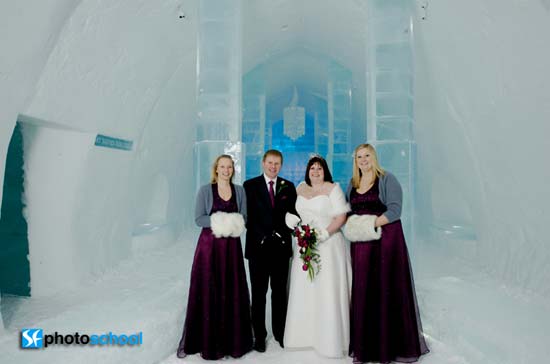 I was shooting on average around 3200-5000 ISO inside the Ice Hotel with a few fast prime lenses, the 85mm f/1.4, 35mm f/2 and the 50mm f/1.4. I shot the ceremony with available light only even though I was given permission to use the flash. Using flash would have 'killed' the whole ambience of the beautiful and unique setting. So don't be scared of shooting at high ISO if your camera body allows you to. Coming back to the group shots, my lighting kit is extremely portable, quick to set up and easy to use. I'm pretty much up and running in under 2 minutes which is especially important in such a cold place where you don't want the guests hanging around and getting cold while you take your time setting up the lighting gear.

After the group shots, I spent about 10-15 minutes with the couple and we went around the hotel and took their shots. Then we went to the 'warm bar' and shortly afterwards the wedding breakfast and then the day wasover. I was pretty exhausted by the hectic activity and the cold conditions but it was worth every penny! I absolutely thoroughly enjoyed the wedding and it's amongst one of my favourites. 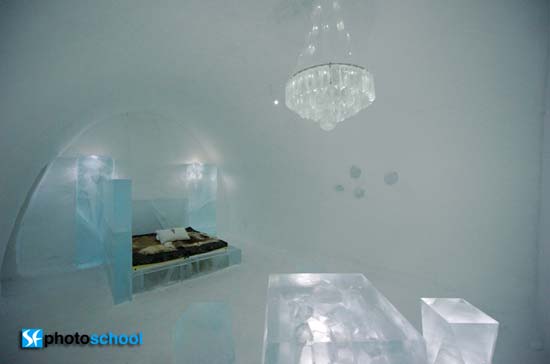