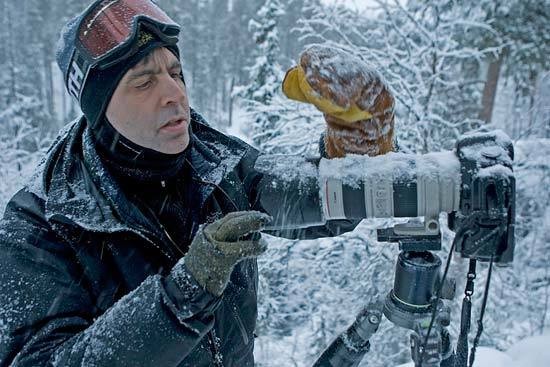 Written and photographed by Peter Essick.

These photographs were taken for a National Geographic Magazine article on Oulanka National Park that was published in June 2009. I made two trips to the park to document the Summer and Fall seasons. The summer has some nice flowers and the midnight sun. In the autumn there is nice color on the birch trees and some early frost. However, for almost seven months of the year the park is covered in snow so it was important to include the winter season in the story.

I planned a winter trip for two weeks in February, timed to coincide with the full moon. February has a little more daylight hours than December or February, but still has deep snow. I hired a local guide to help me with the considerable logistics. Most of the park facilities are closed in the winter and only some of the roads are open. We were able to stay in a scientific research facility in the park and that proved to be very helpful. It is very cold and wet conditions to have to camp and each night we were able to dry out our gear, download all the photos and get ready for the next day.

The average temperature was about minus 20C during the day, and it got down to almost minus 40C on a few occasions. Each morning we would get up at 4am, put on several layers of winter clothing and then travel by 4wd van or snowmobile to a trailhead in the park. We would then usually get on snowshoes and walk in to spot for sunrise.

I found that it was not that difficult to work down to about minus 20. Below that my fingers would freeze, the tripod legs would stick and the lenses would fog often. My Canon digital cameras performed well down, but the batteries don’t last very long at that temperature. The data cards sometimes missed an image, but I write to two cards as a backup so I didn’t lose any images. 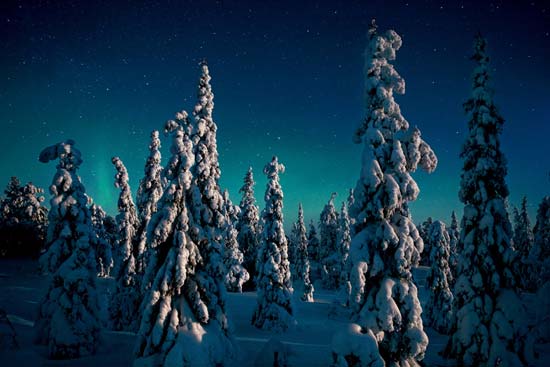 The first photograph of the frozen spruce trees was taken on top of a high fell. When the temperature reaches about minus 20 C the snow freezes as it falls and produces this beautiful effect. I wanted to take this picture by moonlight. There is a big ski area about three miles away the lights from the night skiing ruined the moonlight until they closed down at about 11pm. So it turned out there was only two nights with the combination of low side moonlight and a dark sky. Fortunately on one it was clear and there also was some activity of the aurora borealis.

The second photograph is a panoramic of the Kitka River, one of the two main rivers in the park. The panoramic was accomplished by stitching together seven vertical images. I had found this spot when I was in the park in the summer, but it was much more difficult to get here in the winter. I was glad I had marked the spot with GPS. 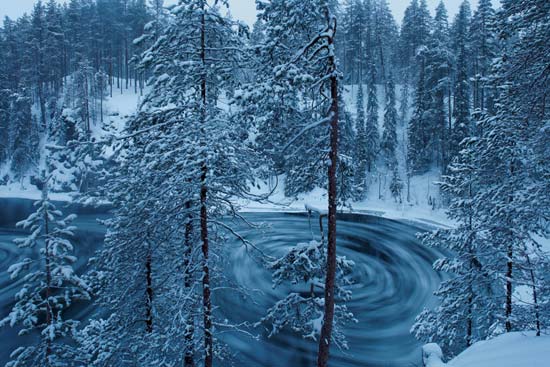 The third image is a lagoon on the Kitka River that was filled with small icebergs. One afternoon, I noticed that they were moving from the water current. The next morning we came back and a 30 second exposure revealed the circular pattern. 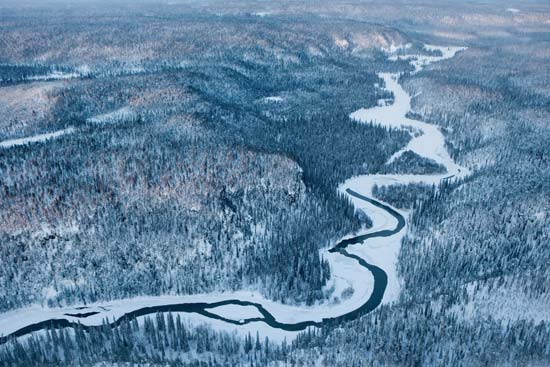 The aerial photo was taken to show the topography of the park. There were no small planes at the nearby airport that operated in the winter. We found one pilot at an airport about 100 miles away that was willing to fly a small plane in the winter conditions. The plane was an older vintage tail dragger and didn’t have an open window from the front seat. I had to lay down across the back seat dressed in all the clothes I had and poke my camera out a small opening in order to use a wide angle. I had to yell general directions in English to the guide in the front seat who would then translate to the pilot. 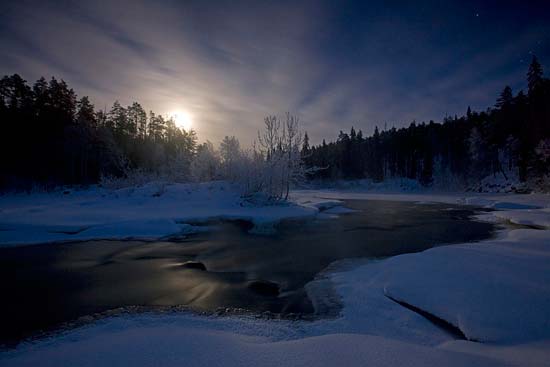 The last photo was taken of the moon rising on the Oulanka River late in the afternoon. This was probably the coldest day of the trip. The lens kept fogging and my fingers were freezing, but the adrenaline kept me going as I wanted to a photograph to match my feelings about the beautiful northern winter of Oulanka.

For the past 23 years I have worked as a freelance photojournalist. My main client has been National Geographic magazine, and I have produced more than 30 stories for the magazine on many different topics. I first started at the magazine as a summer intern while studying photojournalism at the University of Missouri.

I have been fortunate to travel to all seven continents in search of compelling pictures.  Some of my favorite and most rewarding stories have been on Inner Japan, the American Wilderness, the Carbon Cycle, Global Warming and Global Freshwater. I am also proud that a story on nuclear waste that I did in 2002 won first prize at World Press Photos in Amsterdam.

Away from the magazine world, my photographs have been included in the Photography, Man and the Environment exhibit at Viterbo, Italy and in Thy Brothers’ Keeper exhibit at the Flint Institute of the Arts, Michigan. In April 2005, Outdoor Photographer magazine did a feature story about my efforts to photograph the effects of global warming. These photos were also seen on The Oprah Show, This Morning with George Stephanopolis and in the movie, An Inconvenient Truth. My photographs have been in Time magazine’s Great Images of the 20th Century and the 100 Best Photographs of National Geographic.

I live in Stone Mountain, GA with my wife, Jackie and nine-year-old son, Jalen.