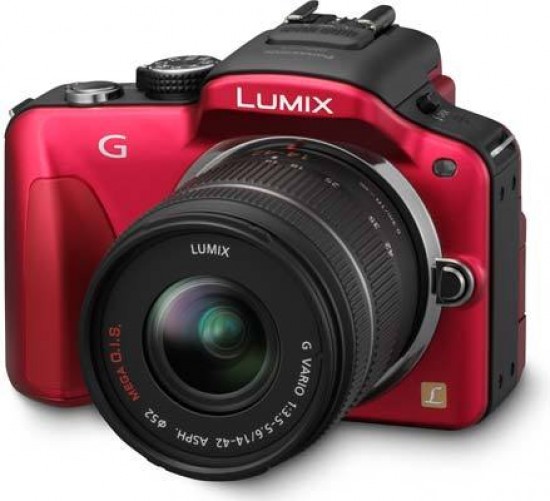 Question: For some reason the G3's screen looks larger than the G2's [in fact it's the same] side by side? Probably because the proportions of the camera are that much smaller.

DM: “Yes, it's 3-inch and a touch screen. And weight wise the G2 was 371g, whereas with the G3 we have got 336g – so ten per cent downsizing. So in terms of size and weight we have a very competitive advantage. And of course it's the world's smallest and lightest with a viewfinder.”

Question: It has to be doesn't it? Because then it gives us guys something new to write about.

DM: “[Laughter] Yes. And now we are going to move on to image quality. We are going to use a newly developed 15.8 megapixel Live Mos sensor and Venus Engine FHD, which is used in the GH2. We've also introduced dynamic control and now our burst shooting is 4fps in full resolution and 20fps with electronic shutter. I now want to compare the sensor used in the G2 with that of the G3. Of course the image quality of the G2 is quite good, but at the pixel area level and circuit area level we have still got some noise, so the outcome of the picture is that we have medium noise levels. However with the newly developed sensor of the G3, even at the pixel area we have dramatically reduced the noise and also at the circuit area we've introduced a new system to reduce the noise.”

Question: The sensor used in the GH1 and GH2 has the analogue to digital conversion on the sensor, but with all other sensors it's a separate chip.

DM: “The sensor here is a conventional sensor, so different to the GH2.”

JM: “For want of a better term it's an analogue sensor, same as G1 and G2, GF. And GH is the digital sensor. But in terms of what they've achieved in terms of image quality is a huge step on from those sensors – with new circuitry and noise management. Because of course we want this, in terms of price, to ‘sit' competitively against a step up digital SLR price. Whereas the GH2 we wanted right at the 60D level.”

Question: For the techies who scrutinise test results in fine detail it has to be said that what Sony are doing with APS-C sensors – used by Pentax, Sony and Nikon – is just staggering; quite a big step ahead of Panasonic test results.

JM: “Yes, I think we realised that we had to improve our sensors. And we have made significant improvements based on feedback that we've had to previous models. There was a gap to close. And it's not the only part of the camera that makes it good, it is the processor, it is the metering, it is the glass you put in front. The GH2 sensor actually does beat a lot of the APS-C sensors in terms of its range and resolution. We realised that the G1 and G2 sensor, which is the same in both models, does a great job at ISO100-400 but when you get to ISO800 and above we weren't delivering. But with the G3 we have made big improvements to close that gap.”

DM: “So between the G2 and G3 sensor at ISO3200 and ISO6400 and we have a 6 decibel and 9 decibel improvement. Of course it depends on the shooting condition so that's in the best case. Nevertheless you can see that compared with the previous model we have made a big improvement. From the Raw file we apply the resolution process first, and then we apply noise reduction and put the two together to help the image quality. So at the same time we have both fine detail and low noise. The image quality is very, very close to our flagship model the GH2 – and we still have a month to improve further.”

Question: Will you see the improvement only in a JPEG or also in a Raw file?

DM: “I will have to check but I believe we also have an improvement in the Raw file.”

DM: “So at the moment, according to our engineers, compared with the G2 we have a one step improvement. So the G3 at ISO3200 is almost the same as ISO1600 on the G2. OK, let's talk about the AF system. Now the GH2 has the world's fastest AF speed of 0.1 secs and we have incorporated the same system in the G3 with 14-140mm 10x lens. So it's as fast as the GH2. And with the kit lens 14-42mm, AF is 0.18 seconds, and with the 45-200mm it is 0.105 seconds, so our AF speed is very fast and accurate. We have exceeded all other DSLR cameras. AF contrast system is not only famous for speed but also for accuracy. If we look at auto focus probability at aperture f/1.4 we have 90% success, but conventional phase difference AF has only 60%. That's a very important point, but we still have some more improvements. Coming up next is full area focusing. In the conventional G series if we use 1-point AF we saw the grey area in the LCD, but now we have full area focusing so we can put the AF point anywhere on the LCD.”

DM: “If we think of conventional phase difference AF, and this is just an example, the EOS 550D has got 9-area AF, but we can put the AF anywhere in the screen – that's a big difference. We have got more flexibility, accuracy and speed. And the next is pin point AF. Currently we have got four AF modes – pin point AF is set as the fifth.”

Question: That's good because sometimes the single AF area is quite big and sometimes you can miss the subject.

DM: “Yes, so first press the shutter down halfway and it magnifies. Or we can also set the AF area.”

JM: “So if you keep the shutter release button held down to zoom in, after about two seconds it will pop back out. A lot of these changes that Dai is going through are directly as a result of consumer feedback saying I want full area focus control, I need something to go beyond single point AF. You can touch the screen to fire the shutter as well – and you can touch the off-centre subject to bias focus toward that as well.”

DM: “And also we incorporated the same technology into manual focus mode. Stick the camera to MF and a small window comes up and we can adjust the focus. If we touch on this icon we have 4x magnification, if we touch again we have 5x and then 10x.”

Question: With the system as it is now it can flip backwards and forewords between the magnification and the full view, which can be frustrating.

DM: “And also we have the same function in AF + MF mode. OK, let's move on to the design. As I explained the G3 will be the world's smallest and lightest camera with live viewfinder. The body is actually aluminium and we are going to offer three colours in this market. Also we're changing the design of the lens barrel so that it will be black with a silver ring, so it looks more high quality. And with the white bodied camera we'll offer the same colour, but with a silver ring.”

Question: This is for the UK, but what other colours will be available to the worldwide market?

JM: “Just chocolate. Your Parisien readers will be able to get hold of that version.”

DM: “The free angle LCD with live view finder has 100% field of view, which is the same as professional cameras. And also magnification is 0.7x, so if we look at competitors we have quite fine magnification – making it easier to recognise the subject in the live viewfinder. And a very high resolution – 1.44 million dots. At the moment we have a very high resolution and we have had no complaints. A further improvement is iA mode; we can change defocus and also exposure – we call it iA Plus. We will have normal iA and iA Plus. With normal iA we can change defocus by using the slider bar to change aperture and also depth of field, and with iA Plus we change not only defocus but also brightness and colours. The reason for this is that after using iA mode people want to step up, and otherwise the difference between iA mode and Program mode is very big. In iA mode the camera is very smart; it can automatically detect the subject and set the camera up within its parameters – in Program mode the user has to do that and it is really hard for them to do. So we've improved iA mode to iA Plus so that users can change the colour and have creative features.

“Next is video capability: The G2 has got AVCHD lite, 720 HD resolution, but now we have AVCHD Full HD videos – this is one big improvement and we are also using Dolby Digital sound quality for when users look at their movies on the big screen TV.

“And we have got AF tracking again – so users can detect a moving subject during video recording. The G2 has got this but the GH2 hasn't got due to a technical issue, and we have had lots of requests [for it]. At the moment in terms of film features we have My Colour mode and Film mode, but the feedback we had, especially from English speaking countries, was that this was difficult to understand. ‘My Colour' as a term was a bit nondescript, so we have changed the name of this mode to Creative Control and selected the five most used functions from My Colour mode: So Expressive, High Key, Sepia, and High Dynamic. And previously what we called Film Mode we now call Photo Style. And under this we have Standard, Vivid, Natural, Monochrome, Scenery, Portrait and Custom style.”

Question: Couldn't you just put them all under the one heading of ‘Creative Control'? Wouldn't that be easier still?

DM: “Yes but the nature of the functionality is slightly different, I think. Initially Film Mode was aimed at more high end users, and we downgraded Film Mode to My Colour mode. We ended up with two separate functions and we carried over that concept to the G3. We could put everything together, but it would look messy, so we still want to keep this style. So now we have a Creative Control and a Photo Style.

Question: Did people perhaps find it confusing that they were being offered a film mode on a digital camera?

JM: “It was a bit ambiguous in terms of what either of the original modes did. We've still got the scene modes on there as well.”