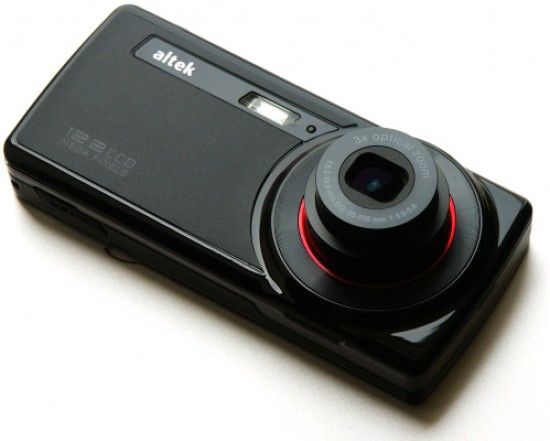 Altek has unveiled the altek T8680, a twelve-megapixel camera phone with 3x optical zoom. Zoom lenses are still very much a rarity on camera phones, which is what makes this announcement interesting. Altek Corporation itself is a Taiwanese company which has been producing digital cameras and camera modules for cell phones, and the T8680 is apparently the first mobile handset being marketed under its own brand name. The most important highlight of the altek T8680 is of course its lens, which spans focal lengths ranging from 6.2mm to 18.6mm, equivalent to 35-105mm in 35mm terms. The maximum aperture is f3 at the wide end and f5.6 at maximum telephoto. The close-focus point is at 5cm. Other high points include a choice of centre-weighted, spot and matrix metering, a sensor and an imaging processor developed in-house, touch focus function and a VGA video mode. The altek press release, which you can read in its entirety after the break, talks about entering the “Mainland China market” with this product, and it is currently unclear whether the T8680 will be sold in other markets or not.

Under the banner “Hands Across the Strait - Towards A Brilliant Future”, the Cross Straits Summit on the Optics Industry and altek Market Strategy Press Conference opened in Beijing on July 23rd. Chairman of the Association for Relations across the Taiwan Strait (ARATS), Chen Yunlin, attended the summit and delivered an important keynote address. altek announced its brand and launch of the world’s first “professional camera phone” with the convergence of true features of digital camera, video recorder and mobile phone that include a 3x optical zoom lens and 12.2 mega pixels resolution.

While altek is still a relatively unknown name in the Mainland China market, altek enjoys wide respect in Taiwan as one of the island’s top corporations. In addition to being the “Global No.1 DSC ODM”, altek previously placed No. 3 performing company on Info Tech 100 Taiwan. Over the years, in addition to its R&D and production work related to digital cameras, altek has also rolled out numerous product application-related innovations. Combined, such have gradually paved the way to altek’s position as an expert in the image solution arena.

In the press conference, altek President Alex Hsia addressed a gathering of reporters from nearly 100 Mainland and Taiwan news outlets, announcing the formal launch by his company of the world’s first high quality “professional camera phone” to offer full digital camera functionality. This revolutionary phone and camera hybrid, sporting a 3x optical zoom lens and 12.2 mega pixels resolution, is aimed at consumers in the Mainland China market who seek high quality image in their camera phone. The functionality is far beyond the market offerings from all branded companies.

altek is the only digital camera manufacturer in the world with in-house image processor design capabilities, and each altek camera carries an altek-designed image processor. The altek T8680 benefits from years of altek chip development and design experience. When used as a camera, the altek T8680 draws on an independent image processor to capture images more quickly and reliably than ever before, providing powerful features able to boost picture sharpness and clarity. Even in low light settings, pictures taken with the altek T8680 show greater detail and colors that are visibly more genuine.

President Hsia added that his company’s latest product, the altek T8680, crystallized the talent of R&D staff from both the Mainland and Taiwan to create a world-leading product. This accomplishment once again demonstrates that hard work and dedication are what are required to break barriers and realize new breakthroughs.

Regarding the optics industry summit, in-depth presentations were given by altek President Alex Hsia, China Academy of Engineering Academicians and Tsinghua University Department of Precision Instruments and Mechanology Professor Jin Guofan. There are lots of optics professionals and scholars from both sides of the Taiwan Strait. At the summit, attendees joined with industry representatives to discuss the current state and future of optics and digital imaging in Mainland China and to move toward mutual consensus on the potential for cooperation between private industry and universities in such myriad fields as medicine, telecommunications and automotive electronics as well as in further developing key optics components.

Alex Hsia stated that earning the position of “Global No.1 DSC ODM” reflected directly customer and industry confidence in altek’s ability. In the future, altek will foster new breakthroughs in optics technologies and products will continue leveraging its Cross-Strait relative advantages and R&D capabilities with universities to overcome technological bottlenecks and promote the altek brand in both the optics and imaging fields.