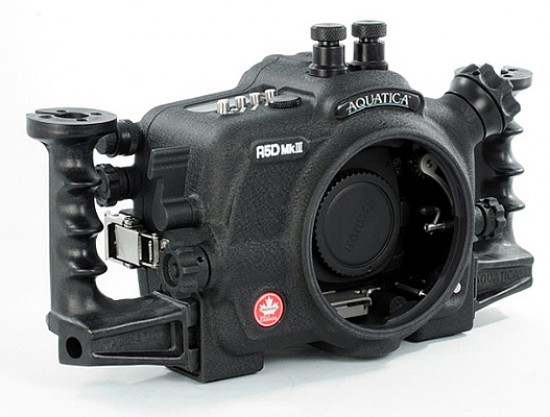 The Aquatica Team has unveiled the Aquatica A5D Mk III underwater housing for the Canon EOS 5D Mark III digital SLR camera. Featuring a newly designed camera tray that smoothly and precisely positions the camera in the housing, the Aquatica A5D Mk III is aimed at professional photographers and videograpers. “Given the immense impact its predecessor, the Aquatica 5D Mk II, had on the underwater video industry, it was deemed absolutely important that this new housing be optimized even more for this task, all video controls where redesigned for easier reach and smoother operation, without sacrificing nothing to the still image side of the housing operation,” the company claims. Also, the new housing has the same standard 90m/300ft depth rating and can still be upgraded to 130m/425ft. The Aquatica A5D Mk III is priced at $3,199.

Saddle up! The new workhorse from Aquatica is being introduced!

The Aquatica Team is proud to introduce you to the Aquatica A5D Mk III housing for the acclaimed Canon 5D Mk III.

Our Design team has upped the game with this recently released camera. New features have been added to this housing to improve operation and compatibility, but importantly, this precision housing is the product of a very time proven lineage of underwater camera housing. 30 years of knowledge in this field has made sure that every aspect of the housing ergonomics and access to all controls were carefully implemented. The final result of this camera housing mirrors the constant evolution of technology and the input of highly respected professionals image makers from around the world.

The Aquatica A5D Mk III housing still benefits from the finest material available in the industry. Carefully crafted from a selected alloy of aircraft grade aluminum and premium grade of stainless steel, the housing is machined on the latest 5 axis computer assisted machines. it is then protected by anodizing to North American military specification for further protection, Aquatica provides corrosion inhibiting zinc anodes as standard equipment and coats their housing with a baked on, tough as nail, powder coating. This extra level of protection does make a huge difference as can be seen on some Aquatica housings that even with over 1,500 dive on them, still look as fresh as the day they came out of the box. This housing is made for the hard working professional in mind, one who truly understands reliability in the field.

We introduced on this housing a newly designed camera tray; it smoothly and precisely positions the camera in the housing and is easily disengaged by a simple push on a tab. The zoom actuating pinion gear and the lens release lever pull out to allow the user to remove the camera from the back while keeping a lens and zoom gear attached.

Additional bulkheads pass through access holes have been added (bringing the total to three) to allow uses of potential accessories such a external monitor, triggering device and/or sound recording accessories. Given the immense impact its predecessor, the Aquatica 5D Mk II, had on the underwater video industry, it was deemed absolutely important that this new housing be optimized even more for this task, all video controls where redesigned for easier reach and smoother operation, without sacrificing nothing to the still image side of the housing operation.

The AF-ON & star button access is now provided with a rotating collar that prevents ambient pressure from pushing it back toward the housing. Menus buttons have been angled to provide better access from your left hand. A new gear system with a smaller housing pinion gear and larger lens gear results in smoother action while zooming in a video sequence.

The A5D Mk III housing was made as small as a it could be, nevertheless its lightness in weight should not be taken for a weakness. This housing still has the same standard 90m/300ft depth rating and can still be upgraded to 130m/425ft. Its knurled knobs and oversized controls mean easy operation no matter what the situation is. Being built in Canada means that every Aquatica housing is born and bred in one of the world most rugged diving environment. Bottom line, if it works in our local conditions, it will work everywhere else!

Handling is still via molded grips, they have been the reference in comfort for the last 25 years. Theses lightweight yet sturdy grip handles are made of one piece and cannot come unglued, fall apart or corrode. Both grips are provided with mounting holes ready to accept the most current strobes and their supporting arms. The housing has an extra mounting point for a focus/video light or other accessories on top and 3 additional mounting points are provided under for various brackets, support or tripods.
Bulkhead strobe connectors have also evolved, with six active pins bulkhead giving access to TTL flash exposure via currently available third party TTL converters. They are now user serviceable and replacing them is done quickly without requiring the need for any special tool, in a matter of minutes. Again, these improvements were implemented with the working professional in mind, reliability and user’s friendly field maintenance being the key word here.

On the right is a view of the office end on the new Aquatica A5D Mk III, clearly showing the serious nature of this housing. On the left hand, the buttons and mode selector control are angled and positioned for quicker access to the various functions. On the right hand the record button has been relocated closer to your thumb and not only has it been oversized but is now clearly identified with a bright red coating. The Live View toggle remains within easy reach and the SET button has also been oversized. The multi controller pad found on the Canon 5D Mk III is now made accessible. All push buttons are of high quality Type 304 stainless steel, the same used in the aerospace industry; these will not break or rust. Their smooth operation and position gives the photographer a very intuitive and normal feel to the housing.

The Aquatica A5D Mk III is supplied with our Galileo type eye piece. This high quality and coated optical finder gives a bright and full view of the view finder. For those seeking the ultimate in viewing for still image, the optional Aqua View Finder, available in straight and 45 degrees version, are among the best of the industry, they can easily be installed in a matter of a few minutes by the user. The enlarged and enhanced image provided by the Aqua View Finder is second to none in clarity, It provides the photographer with tack sharp corner to corner viewing of the camera view finder for composing and critical focusing

Shown to your left and ready to go to work, is the Aquatica A5D Mk III with the 9.25” Megadome, state-of-the-art BK-7 coated glass dome, it is attached to our unique extension ring with manual focus capability, this extension is available for both the Canon EF 16-35mm f/2.8L USM Type II and the EF 17-40mm f/4L USM, Two serious candidates for the video shooter and for which manual focus access is vital, manual focusing with prime lens focusing can be done using the controls knob on the upper left side of the housing.

The A5D Mk III is supported by one of the most established and comprehensive port and accessories system of the industry. The Canon 5D Mk III is destined, much like its predecessor, the 5D Mk II, for a life of multi tasking role. This previous A5D Mk II is still being used by many of the major television underwater documentary production; it has been embraced by scores of top image makers in the world whose work can be seen weekly on network television, advertising work and movie productions.

This philosophy that made the Canon 5D Mk II and its Aquatica housing so popular has not been lost on this newer version! Every effort was made to give you an underwater imaging system that can be tailored to your needs.

Priced at just 3,199.00 USD, it is the most economical and best designed of its category.