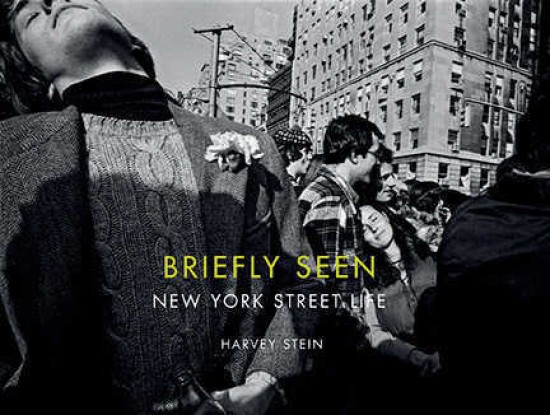 Briefly Seen: New York Street Life is a new title from Schiffer Publishing. Containing 172 timeless black-and-white photographs taken by Harvey Stein between 1974 and 2014, Briefly Seen is the last in Stein's trilogy of books about New York. The first monograph, Coney Island 40 Years (Schiffer Publishing, 2011), documents the photographer's ongoing fascination with the eccentric and exuberant aspects of this famous Brooklyn beach community. The second title, Harlem Street Portraits (Schiffer Publishing, 2013), is a series of more formalised environmental portraits of the people who live in this historically significant African American neighborhood. In Briefly Seen, Stein turns his lens on some of the most densely populated areas of the city -- midtown and downtown Manhattan. The book is available for $45.

In BRIEFLY SEEN New York Street Life (Schiffer Publishing, November 2015), photographs by Harvey Stein, the legendary street photographer who has spent over forty years photographing the people and neighborhoods of New York, turns his lens on some of the most densely populated areas of the city -- midtown and downtown Manhattan. He photographs the packed and pulsating streets during peak hours of activity during the day and night, including rush hour, to capture up close the theater of the everyday as it plays out on the streets. Stein walks with the crowd, melting into it with his camera to capture this choreography of density that is unparalleled anywhere else in the world.

In viewing the 172 timeless black-and-white images in BRIEFLY SEEN taken by Harvey Stein between 1974 and 2014, it is clear that he is smitten by the vibrancy, excitement and diversity of New York street life. He captures the crowds, singling out individuals who pique his interest, and the connection between the people, the buildings, and the charged environment that envelops them.

Stein describes his work as "my response to the rough, raw, charged and even magical energy of New York City street life. I am attracted to the nuances of behavior and body language in public places, characteristic of the 'walker in the city.'"

To heighten the feeling of the movement, anxiety, and vigor of the streets, Stein employs a myriad of photographic techniques that bring to the work a complexity and gravitas that makes BRIEFLY SEEN an instant classic. He uses grain, blur, low-angle flash, skewed perspectives, tight cropping, and wide-angle views, to sweep the viewer into the experience and feel of walking the streets of New York. The book captures the spirit of the city where anything can happen and opportunity abounds.

BRIEFLY SEEN is the last in Stein's trilogy of books about New York. The first monograph, Coney Island 40 Years (Schiffer Publishing, 2011), documents the photographer's ongoing fascination with the eccentric and exuberant aspects of this famous Brooklyn beach community. The second title, Harlem Street Portraits (Schiffer Publishing, 2013), is a series of more formalized environmental portraits of the people who live in this historically significant African American neighborhood. In Briefly Seen, Stein is working closer to home. Among the images are his favorite haunts -- the intersection of 5th Avenue and 45th street (a few blocks away from the International Center of Photography School where he has been teaching since the 1970s), landmarks like Radio City Music Hall or Little Italy, and the southeast corner of 5th Avenue and 57th street where Tiffany's and Trump Tower loom.

With the publication of BRIEFLY SEEN, Harvey Stein has earned his place in an elite circle of practitioners who have made New York City their studio from the early 20th century through the present day, including Lewis Hine, Alfred Stieglitz, Paul Strand, Charles Sheeler, Harold Feinstein, Gary Winogrand, Lee Friedlander, and Diane Arbus.

Harvey Stein is a professional photographer, teacher, lecturer, author and curator based in New York City. He currently teaches at the International Center of Photography. Stein is a frequent lecturer on photography both in the United States and abroad. He is the Director of Photography at Umbrella Arts Gallery, located in the East Village of Manhattan. He has also been a member of the faculty of the School of Visual Arts, New School University, Drew University, Rochester Institute of Technology and the University of Bridgeport.

Marilyn Satin Kushner is Curator and Head, Department of Prints, Photographs, and Architectural Collections at the New-York Historical Society. Previously she was Department Chair, Prints, Drawings, and Photographs and Curator of Prints and Drawings at the Brooklyn Museum (1994-2006). In addition to The Armory Show at 100: Modern Art and Revolution which she co-curated in 2013, Kushner has mounted more than thirty exhibitions focusing on such subjects as photographers Camilo Jose Vergara, Edward Burtynsky, Victor Prevost, and Platon; images from 9/11; early twentieth-century advertising and prints; Walton Ford watercolors; and the career of Morgan Russell.

Tracy Xavia Karner, PhD, is an author, curator, photography enthusiast and visual sociologist. Active in the Houston photography community, Karner serves on the Advisory Board of Houston Center for Photography, and is a supporter and past officer of Photo Forum at the Museum of Fine Arts Houston.  She is the Chair of the Sociology Department at the University of Houston and teaches courses in Visual Sociology, Sociology of Art and Sociology of Culture. Currently, she is working on a book about the Houston photography community.