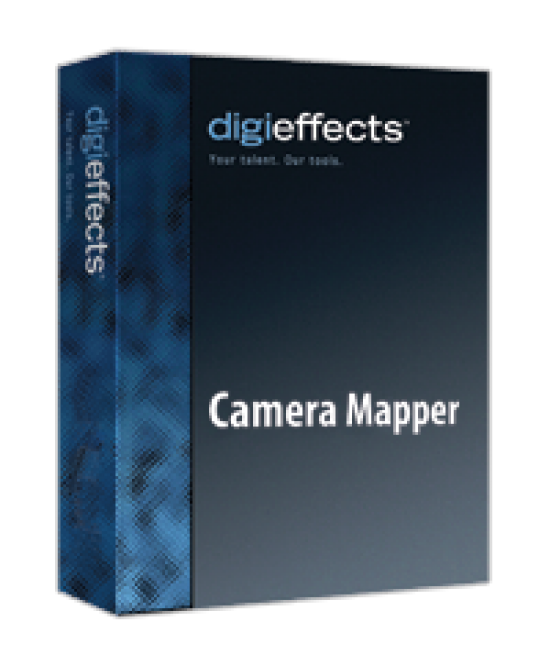 Digieffects has announced that Camera Mapper, a plugin for Adobe After Effects, allows you to simulate a 3D scene from 2D stills or footage, is available for purchase. It allows you to isolate one or several objects in your footage, project these objects on a separate layer and pull that layer out of the background, creating the visual illusion of the object floating in front of the original footage. The Camera Mapper plugin, which is compatible with Adobe After Effects 7, CS3 and CS4, sells for $79. Camera Maker is also available in a $229 bundle with PlaneSpace, a program developed by Red Giant Software for arranging and animating 3D layers easily.

Digieffects®, a developer of popular visual effects software plugins, today announced that Camera Mapper is available for purchase. Camera Mapper, a plugin for Adobe After Effects, allows you to simulate a 3D scene from 2D stills or footage. It allows you to isolate one or several objects in your footage, project these objects on a separate layer and pull that layer out of the background, creating the visual illusion of the object floating in front of the original footage.

According to Robert Sharp, President of Digieffects “camera mapping is a key part of compositing applications such as Nuke, and while you could do this natively in After Effects, it would be only at the expense of some complicated workarounds that cost time and lack important capabilities.”

Camera Mapper was developed in close collaboration with Mark Christiansen, author of The After Effects Studio Techniques books, and industry veteran who has worked on several feature films including Avatar, Pirates 3, All About Evil and The Day After Tomorrow.

According to Robert Sharp, President of Digieffects, “Mark has added a tremendous amount of value to the Camera Mapper development cycle.  He brings a true ‘users’ perspective and the end result is an After Effects plugin that is highly valuable and usable.”

Mark Christiansen comments that “Camera Mapper provides an elegant solution to a vexing problem in After Effects; the alternative for mapping a scene to 3D geometry is complicated enough that it has occupied several pages of each edition of my After Effects books.”

* Realistically create the illusion that a still image is fully dimensional moving footage.
* Subtly change the perspective of a shot, or animate it over time.
* Can be combined with 3D tracking to add or alter elements in a scene.
* Now you can step back in time and get another chance to move the camera.
* Allows you to stay in After Effects when working with fully dimensional models, rather than jumping into an expensive and complex 3D application.

Bundle Available with Red Giant Software PlaneSpace
The Camera Mapper/PlaneSpace bundle is only $229, a $49 savings if customers were to purchase the two software packages independently.  PlaneSpace, developed by Red Giant Software, allows you to arrange and animate 3D layers easily.  PlaneSpace eliminates the tedious task of managing the individual layers in multi-layer effects and automatically creates layers that form cubic, cylindrical, and spheroid shapes or complex matrices.  Together, Camera Mapper and PlaneSpace are the perfect bundle for simulating a 3D scene from 2D footage right in After Effects.

Pricing and Availability
Camera Mapper represents a true breakthrough in pricing. At $79 it is affordable to even the most stretched budget. However, it offers the quality, speed and creativity that high-end plugins provide.  Camera Mapper is available directly from Digieffects as well as its distributor and reseller partners. The plugin is compatible with Adobe After Effects 7, CS3 and CS4 and runs on Mac PPC, Mac Intel, and Windows XP and Windows Vista operating systems.

About Digieffects
Digieffects is a developer of popular software visual effects plug-ins for Adobe After Effects, Adobe Premiere Pro, Apple Final Cut Pro and Autodesk Combustion. The company has been in the business since the beginning of the “plugin revolution” which dates back to 1996. Over the years, Digieffects has had great success with software products like Cinelook and Delirium and is proud to call thousands of film and video producers all around the world its customers and friends.