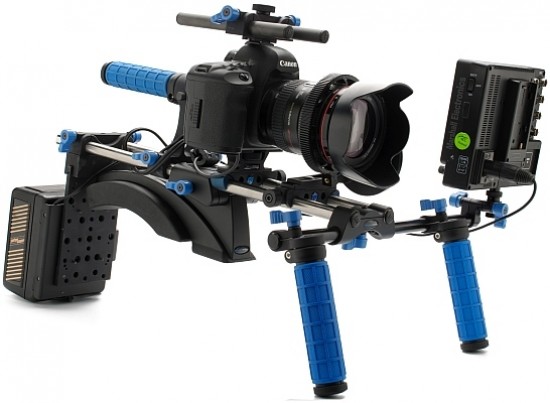 Canon has announced that the season finale of House is the first network television prime time drama episode to have been shot entirely on a digital SLR camera. The crew used a Canon EOS 5D Mark II body and a selection of EF lenses for a completely digital workflow that allowed them to complete filming the entire episode in just 10 days. The season finale airs tonight, Monday, May 17 (8:00-9:01 PM ET/PT) on FOX.

LAKE SUCCESS, N.Y., May 17, 2010 — Canon U.S.A., Inc., a leader in digital imaging, would like to congratulate the cast and crew from the hit series HOUSE on filming the entire season finale episode on the Canon EOS 5D Mark II. This crowning achievement marks the first network television prime time drama episode to be shot entirely on a Digital SLR camera, making it an industry-first.

In addition to shooting the episode on the Canon EOS 5D Mark II, Canon EF lenses were used for a complete Canon workflow for image capture. Recording every second of footage to compact flash cards, the crew for HOUSE took full advantage of a completely digital workflow and was able to complete filming the entire episode in just 10 days.

The season finale airs tonight, Monday, May 17 (8:00-9:01 PM ET/PT) on FOX. Canon encourages everyone to tune in tonight and watch. For more information on HOUSE, please visit www.fox.com/house.

About Canon U.S.A., Inc.
Canon U.S.A., Inc., is a leading provider of consumer, business-to-business, and industrial digital imaging solutions. Its parent company, Canon Inc. (NYSE:CAJ), a top patent holder of technology, ranked fourth overall in the U.S. in 2009†, with global revenues of US $35 billion, is listed as number four in the computer industry on Fortune Magazine’s World’s Most Admired Companies 2009 list, and is on the 2009 BusinessWeek list of “100 Best Global Brands.” Canon U.S.A. is committed to the highest levels of customer satisfaction and loyalty, providing 100 percent U.S.-based consumer service and support for all of the products it distributes. At Canon, we care because caring is essential to living together in harmony. Founded upon a corporate philosophy of Kyosei – “all people, regardless of race, religion or culture, harmoniously living and working together into the future” – Canon U.S.A. supports a number of social, youth, educational and other programs, including environmental and recycling initiatives. Additional information about these programs can be found at www.usa.canon.com/kyosei. To keep apprised of the latest news from Canon U.S.A., sign up for the Company’s RSS news feed by visiting www.usa.canon.com/rss.