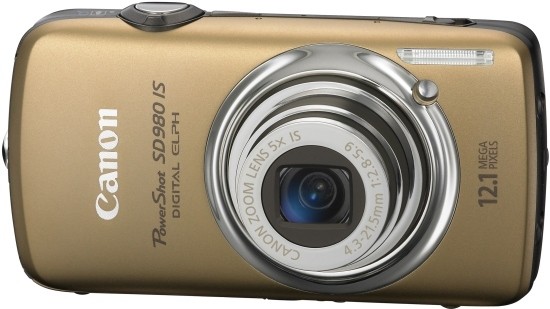 The 12.1-megapixel Canon Digital IXUS 200 IS (also known as the PowerShot SD980 IS Digital ELPH) is the first-ever touchscreen IXUS / ELPH and, quite unusually for a compact camera, it features 24-120mm equivalent 5x zoom lens. The touchscreen system is allegedly easy to use: simply tap the 3.0 inch screen to ‘point’ at the face you want to focus on, and the Canon Digital IXUS 200 IS / PowerShot SD980 IS Digital ELPH will do the rest - automatically tracking your subject and keeping them in perfect focus. When reviewing your images a simple movement of your finger on-screen allows you to erase, protect, rotate or tag your favourite photos so you can easily review your favourite shots. 720p HD video recording rounds off the feature set of the new IXUS / ELPH. Scheduled to be available in September (Europe) and October (USA), the Digital IXUS 800 IS / PowerShot SD980 IS Digital ELPH camera is projected to retail for £329.00 / €379.00 / $329.99.

A ‘wide’ world in your hands

The 12.1 Megapixel Digital IXUS 200 IS lets you see – and take – the whole picture, with a stunning 24mm ultra-wide angle lens with 5x optical zoom - the first time a 24mm lens has been featured in a Digital IXUS. This impressive lens with a wider perspective than conventional wide-angle lenses lets you capture stunning landscapes and get everyone in the frame even when shooting large groups of people. The 5x optical zoom also enables you to get close to your subjects for spontaneous portraits and close-ups.

Canon’s first ever touch-screen system couldn’t be easier to use and lets you quickly and naturally flick through pictures or select your shooting settings with a single finger-press.  Taking photos of friends? Simply tap the 3.0 inch widescreen to ‘point’ at the face you want to focus on, and the Digital IXUS 200 IS will do the rest - automatically tracking your subject and keeping them in perfect focus, letting you take exactly the shot you want.  When reviewing your images a simple movement of your finger on-screen allows you to erase, protect, rotate or tag your favourite photos so you can easily review your favourite shots.

Spontaneous and easy–to-use, the touch-screen works alongside the traditional camera controls to give an enhanced, natural and intuitive experience.  The inclusion of a Smart Auto mode with Scene Detection Technology allows you to simply point and shoot - safe in the knowledge that all the hard work, such as scene and setting selection, has been done for you. The Digital IXUS 200 IS will also make sure that faces of friends are always captured perfectly thanks to Face Detection Technology.

The Digital IXUS 200 IS is amazingly simple to use. Active Display allows you to flick through the shots you’ve taken, simply by moving and tilting the camera. A sleek menu system with ’Hints & Tips’ – a feature introduced on all new Canon Digital IXUS products – guides you through your picture taking helping you to understand the settings and functions.

With a choice of four striking colours – Blue, Gold, Purple, or Silver - the Digital IXUS 200 IS combines fingertip control, total simplicity and a super-stylish design.

Scheduled to be available in October, the PowerShot SD980 IS Digital ELPH Camera retails for an estimated price of $329.99.