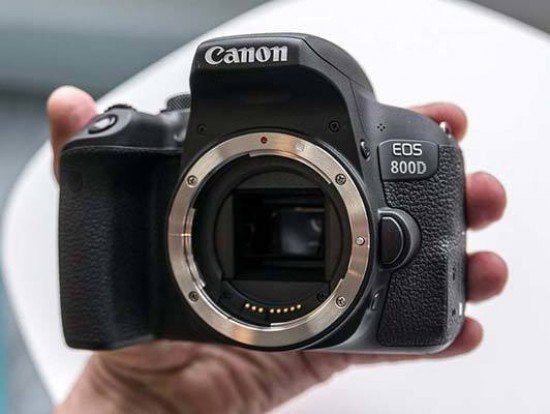 This month Canon celebrates 30 years of its EOS system. The company has invested a lot in the system over those years, launching almost 100 film and digital EOS cameras and over 100 EF lenses.

To mark the anniversary, Canon UK has held meet-ups to showcase EOS cameras old and new. Photography Blog was invited to an event in the Aldwych disused underground station in London for a hands on with one of the company’s latest EOS cameras, the EOS 800D.

Alongside the launch of the EOS 800D, Canon announced the EOS 77D and the mirrorless EOS M6. A pre production model of the EOS M6 was available to see at the event but not for a proper hands on. We will provide sample images as soon as the EOS M6 becomes available.

With so many EOS DSLRs available today, Canon has the entire range split into beginner, enthusiast and professional groups - which is helpful because the names and numbering system of the cameras has become rather confusing.

The EOS 800D sits at the top of the beginner range of DSLRs, while the EOS 77D at the base of the enthusiast range. The focus here is on our first impressions of the EOS 800D after good use with the camera.

Under the hood, the EOS 800D has an impressive feature set for it’s price point and the EOS 77D has essentially the same key features:

Those familiar with the EOS 750D will be immediately at home with the EOS 800D because the layout of the cameras is practically identical.

Being a 'beginner' DSLR, the EOS 800D is a dinky camera constructed of poly carbonate, though it's textured body and ergonomic grip feel good and provide a solid hold. With the 18-55mm f/3.5-5.6 IS II lens attached, the camera is well balanced and weighs just over 700g.

The vari-angle touchscreen can be used to quickly navigate menus and for focusing and shooting. For all these functions, the screen offers a legitimate alternative to the optical viewfinder - being responsive and allowing shooting from various angles with ease. There are further comments on the speed of autofocus when using live view in the performance section.

It’s in the build and handling where the differences between the EOS 800D and EOS 77D lie. With a ’simpler’ layout, the EOS 800D looks to accommodate beginners likely to make regular use of the auto shooting modes and that do not want to be daunted by lots of controls.

In the EOS 800D there is no top LCD to check camera settings, while on the rear the controls are button only - with no secondary control wheel.

Those that have started to explore using manual camera settings are likely to be better off with the EOS 77D, because there are no obvious direct methods to take full manual control of exposure settings using the EOS 800D.

Depending on the shooting mode, the top dial will change aperture or shutter speed, but to change the other exposure setting, an exposure compensation button on the rear needs to be held down while rotating the top dial. This setup is standard for beginner DSLRs and a tad fiddly.

To save fiddling between ISO settings, there is an auto ISO mode which adjusts the ISO according to the focal length of the lens, the shutter speed and aperture.

For moving subjects I found the auto ISO usually opting for a shutter speed that is a tad slow - I had a few shots with blurred subjects in the low light of the underground station. For static subjects, auto ISO is fine.

All in all, the build and handling of the EOS 800D should satisfy those new to a DSLR, while it’s features satisfy the more advanced user.

Canon must be confident in the EOS 800D, given the event we attended was hosted in the poorly lit disused underground station, where the camera’s performance and image quality would be pushed to its limits.

At the heart of Canon’s EOS 800D is the 24.2-million-pixels APS-C size sensor with 1.6x crop factor. It’s the same sensor as found in the significantly more expensive EOS 80D - so when using the same lens one can expect equally impressive image quality from the EOS 800D. (Check out our full review of the EOS 80D here.)

Looking over the JPEGs taken in low contrast light, the camera produces crisp images and seems to have excellent control of noise at settings up to ISO 1600. The performance is respectable even at ISO 6400.

We look forward to using the EOS 800D in daylight conditions where we expect to see the best of the camera.

One big area of improvement in the EOS 800D over its predecessor the EOS 750D is the AF system, which again has been trickled down from the EOS 80D.

With 45 cross-type AF points, rather than 19 in the EOS 750D, the EOS 800D’s AF points covers a wider area of the frame and offers a versatile and very quick focus.

We had plenty of chances to test the dual pixel CMOS AF system and on the whole have been highly impressed. Live view auto focusing even in the low contrast light of the underground was snappy when shifting between objects at varying distances.

On a couple of occasions the focusing was entirely unsuccessful in particularly low-contrast light, but otherwise we were impressed with the speed of focusing when using either viewfinder or live view.

When shooting video, the EOS 800D offers 5-axis image stabilisation, which enabled us to get some steady handheld footage of the models. With face detection AF applied, the camera is able to fix onto subjects and track slow movement with ease. The times we noticed focus hunting appeared to be a minimum.

The battery life of the camera is a claimed 600-shots. After a few hours using a mixture of viewfinder and live view for shooting different scenarios (and a brief time connecting the camera with a smartphone via the new ‘always-on’ bluetooth function/ few hundred pictures/ handful of videos later), the battery appeared to be mostly unchanged - impressive.

Given the chance to test the camera in challenging low-contrast light conditions, we can report that our first impressions are very good. Image quality is respectable under tough conditions and excellent when the light entering the camera is maximised.

An excellent feature set in a lightweight body with simple layout means the EOS 800D is likely to entice beginners to further explore the world of interchangeable lens cameras.

Perhaps the most impressive aspects of the EOS 800D are its image quality, powerful performance through Canon’s DIGIC 7 processor and its versatile handling through the live view mode of the articulated rear touchscreen.