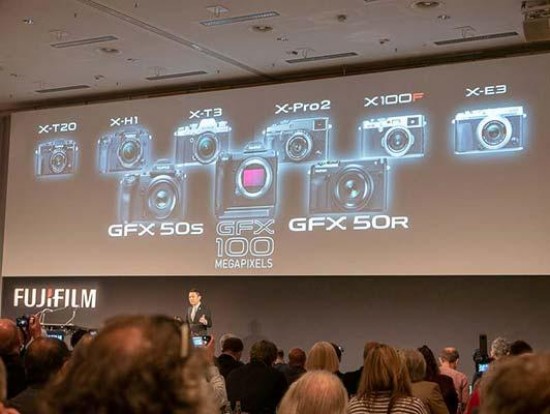 We're at the Fujifilm Photokina 2018 press conference, and Fujifilm have just stated that they are "announcing breakthrough GFX models" at Photokina 2018 - could they be the widely rumoured GFX 50R and GFX 100S? (Yes...)

Fujifilm have achieved 60% growth in X/GFX series during the last 2 years, becoming the #2 mirrorless camera brand in some markets. Back in 1988, 30 years ago, they released the first ever digital camera, the DS-1P, and during the last 84 years they've developed the unique Fujifilm colour science.

The new X-T3 is all about "speed, speed and more speed". Check our all our previous coverage of the X-T3 here.

The XF 16-80mm f/4 is the next lens on the Fujifilm XF roadmap, the world's widest zoom lens with a constant f/4 aperture, followed by the XF 33mm f/1, the world's first ever f/1 lens with auto-focus, and the super-compact XF 16mm f/2.8. Prototypes of all three lenses are being shown at Photokina 2018.

The new GF 50mm f/3.5 lens will be the perfect partner for the GFX 50R camera, making the lightest medium format camera combo.

The GFX system will now be fully compatible with Capture One - for Raw processing, tether shooting and including full support for Fuji's film simulations. There will be three versions - Capture One Express (free), Pro Fujifilm (159 Euro per year) and Pro (180 Euro per year).

Lastly, but not least, the development announcement of the GFX 100, the world's first 100 megapixel mirrorless camera with phase-detection AF and IBIS! Plus 4K movies, the first time ever on a medium-format mirrorless camera. The GFX 100 will be available in the early half of 2019, for around $10,000.