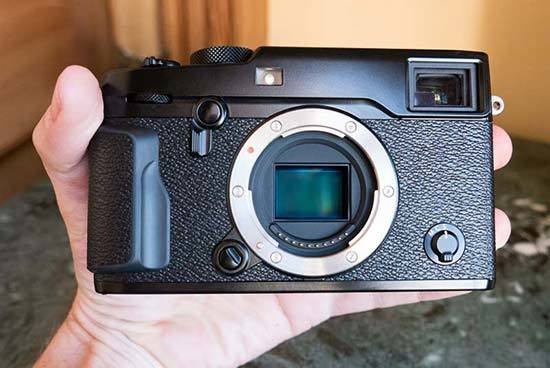 The new Fujifilm X-Pro2 is the replacement for the 4-year-old X-Pro1, a camera that's now showing its age but still loved by many photographers. Billed as the "Evolution of X-Pro1", rather than a re-invention, at first glance the X-Pro2 seems very similar to its predecessor. As a Fujifilm spokesperson told us, "It's not a change, but a sophistication".Look more closely, though, and Fujfim have made a number of important enhancements to the external design, and we've not even mentioned the drastic changes that have been made inside.

At the heart of the X-Pro2 is a brand new 24 megpapixel, X-Trans CMOS III APS-C sensor, which according to Fujifilm produces the best image quality of any X-series camera to date. This is coupled with an equally new processor, the X Processor Pro, which is some 40% faster than the X-Pro1s, as well as supporting 8fps continuous shooting. SDXC UHS-II memory cards are supported via not one, but two card slots, a world first for mirrorless cameras, but sadly Fujifilm have decided not to include 4K video recording, despite claiming that the processor is more than capable of supporting it.

The X-Pro1 was the first camera to feature the so-called Hybrid Viewfinder, and Fujifilm have been hard at work on its successor, the snappily titled "Hybrid Multi Viewfinder". You can now swap between three different modes - OVF, EVF and the new ERF (electronic range-finder mode). The OVF has a magnification of 0.6x and 92% scene coverage, while th EVF offers 0.59x and 100% respectively, The LCD screen has also had some attention heaped on it, utilising a 3-inch 1.62million dot panel,although sadly unlike the new X70, it isn't a touch-screen variant.

The X-Pro2 has a fastest mechanical shutter speed of 1/8000th sec, 1/250th flash sync, 150,000 shutter cycle lifespan, and a very quiet shutter sound. The shutter speed and ISO dials have been cleverly combined, although we found them a little tricky to reliably engage on the early prototype version that we tried out, with a top native ISO speed of 12,800 that's expandable to 51,200 and down to 100 (RAW files run from 200-51,200). There's a new C setting on the exposure compensation dial which allows for a range of +-5 stops. A front command dial has been added too, a la the X-T1, for those times when an aperture ring just won't do/isn't available.

The auto-focus system has undergone an overhaul, now offering 77 AF points with 49 of them being phase-detect and a new focus lever thtat quickly changes the AF point in one of 8 different directions, along with the addition of Wide Tracking and Zone modes. The new Acros film simulation has been incluced, which emulates high-contrast monochrome film, while the new Grain effect adds a gelatin silver print effect to your digital images. The X-Pro2's GUI has been streamilined, with 8 lines per page on 6 different tabs that's much clearer to read, along with a My Menu setting (16 options available).

Among the accessories available for the X-Pro2 on launch are the MHG-XPro2 grip and the BLC-XPro2. Available in black, the new Fujifilm X-Pro2 goes on sale in the UK from 22nd January.

Want to see exactly what the new Fujifilm X-Pro2 camera looks like in the flesh?

Check out our hands-on gallery of photos of the Fujifilm X-Pro2 camera, including a side-by-side comparison with the original X-Pro1 model.