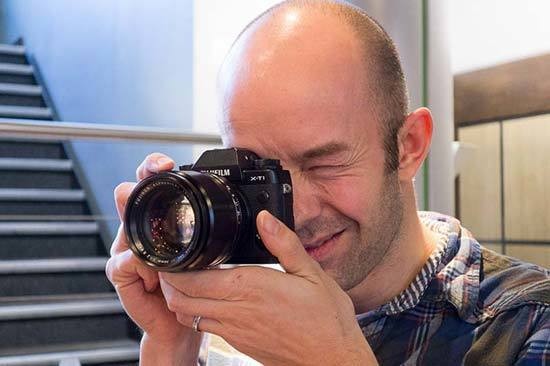 See exactly what the new Fujifilm X-T1 compact system camera looks like in the flesh, and read our first hands-on impressions of this exciting new camera.

Check out our extensive hands-on gallery of photos of the Fujifilm X-T1 compact system camera with the XF 18-55mm and 56mm f/1.2 lenses, and including the new battery grip and flash accessories.

The new Fujifilm X-T1 has a different form factor  to previous X-series bodies - think more DSLR style, rather than rangefinder. Designed to compete with the likes of the Olympus OM-D E-M1 and Sony A7/A7R, the centrally positioned EVF allows for a bigger viewfinder than the more restrictive rangefinder design, and is also better suited to use with longer lenses like the XE 55-200mm.

Fujifilm are trying to expand their reach to sport and action photography with the X-T1, as well as their traditional strengths of reportage, landscape and portraiture. Despite the clear change of form factor, the X-T1 still retains Fujifilm's classic retro design, with even more direct dials than previous models.

Fitting in above the X-E2 and below the X-Pro1 in the range, other standout features of the Fujifilm X-T1 include a tilting LCD screen, remote shooting via wi-fi via the new Fujifilm Camera Remote app (initially available only on Android), and a 0.77x magnification EVF, which is slightly bigger than even the impressive Olympus OM-D E-M1. As well as size, the EVF in the X-T1 suffers from almost no lag, plus the displayed information automatically realigns itself when you switch between landscape and portrait mode - very clever.

This wouldn't be a major new product launch without the Fujifilm X-T1 claiming to be first at something, and rather curiously it's to do with memory cards. The X-T1 is the first camera in the world to be UHS II compatible, potentially offering double write speeds in continuous shooting mode (47 JPEGs / 23 RAW at 8fps) when the memory card manufacturers catch-up and actually release their  UHS II cards.

Another clever feature is the dual manual focusing aid, which shows both the main image and a 100% crop alongside (using either focus peaking or digital split image), so that you can instantly see what's in focus.

The Fujifilm X-T1 uses exactly the same sensor and processor as the X-E2, and similarly employs the same lens modulation optimizer and no optical low-pass filter for enhanced image quality. The X-T1 has an impressively high top ISO speed of 51,200 and no less than 6 customisable function buttons.

The exciting new Fujifilm X-T1 will retail for £1049.99, or in a kit with the 18-55mm lens for £1449.99. As the X-T1 doesn't have a built-in flash, the tiny EF-X8 flash unit is included in the box (much like older Sony NEX cameras). The X-T1 is also the first ever Fujifilm compact system camera to offer a battery grip, called the VG-XT1, which offers 700 shots with two batteries and costs £199. Finally, the MHG-XT1 is an alternative slimline handgrip accessory that retails for £129.99.