Game of Drones - Hands On with the DJI Phantom 3 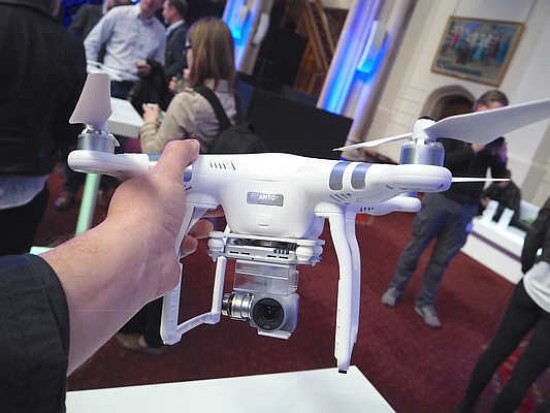 With sales of consumer orientated camera drones on the up, and the technology getting ever more affordable, Chinese manufacturer DJI has announced what it is terming the possible “future of aerial imaging and video”. It has launched not one but two updates to its Phantom series. These are the Phantom 3 ‘Professional’ – a 4K shooting unmanned aerial vehicle with gold detailing and a suggested retail price of £1,159 – plus a second model in the Phantom 3 Advanced. The latter records 1080P video, costs a more affordable £899 SRP, and is outwardly distinguishable via its silver detailing. Gavin Stoker attended the London launch and was able to get hands-on with the devices.

With sales of consumer orientated camera drones on the up, and the technology getting ever more affordable, Chinese manufacturer DJI has announced what it is terming the possible “future of aerial imaging and video”. It has launched not one but two updates to its Phantom series. These are the Phantom 3 ‘Professional’ – a 4K shooting unmanned aerial vehicle with gold detailing and a suggested retail price of £1,159 – plus a second model in the Phantom 3 Advanced. The latter records 1080P video, costs a more affordable £899 SRP, and is outwardly distinguishable via its silver detailing.

Photography Blog attended the London launch and was able to get hands-on with the device/s, up to a point: due to the fact the launch took place in the centre of the city with all its various flight restrictions, we were forbidden from actually flying the Phantom 3. We did the next best thing though, and were able to shoot a series of images and videos of the craft in action in the air as well as hear from DJI themselves.

The relatively affordable price points for both Phantom 3 craft place them within the reach of the mass-market consumer; indeed DJI reckons that we will see a near future where drone sales are not just in the millions but in the billions. “Take the future and do whatever you want with it” was one of the soundbites from the London launch, with the Phantom being pitched at a broader range of users than the manufacturer’s previous Inspire drone.

“This is not just an important milestone for DJI but a new benchmark we’re setting for creative airborne photography,” Michael Perry, DJI’s Global PR Manager claimed, adding that: “there is a level of child-like freedom” that you can experience with camera technology. He described the new Phantom 3 pair as “not just a re-boot or re-fresh”; but said the intention had been to make them “as accessible as smartphone photography.”

The biggest boast however was that: “this is the best consumer quad copter that has ever existed and is going to revolutionize the way people view aerial imaging.” As case in point, the Phantom 3 now offers a 94° field of view lens with f/2.8 aperture. This, it said, helps to flatten out the image, with a larger sensor size and better dynamic range also featuring.

Using three axis-stabilised gimble technology and the supplied hand held remote, users can take pictures and adjust exposure mid flight, or “fine tune the image that you capture from great distances” according to Michael. A tablet PC or smartphone, in conjunction with downloadable app, acts as the pilot/operator’s virtual viewfinder.

“All of this is seamlessly integrated and available at your fingertips. We have integrated DJI’s signature Lightbridge technology into the remote controller, so even at 1.6 kilometres away you’re still going to get stable 720P HD live view in near real time. And this is remarkable not just for creative individuals, but for industrial use too: think about surveyors being able to fly over sites that they’re assessing or being able to explore the depths of a volcano. This would not be possible without the flight controls being precisely tuned. We have been working night and day to make this product as accessible and powerful as possible, to enable it to be used in a such variety of circumstances.”

As far as the Phantom 3 platform itself is concerned, DJI says that it has modified it to be more robust and upgraded the motors so that they accelerate and decelerate faster. There’s improved flight efficiency too: a new battery provides a total time of 23 minutes in the air, while there is also, it is claimed, now an expanded network of GPS satellites the Phantom can take a signal from.

A VPS system – Visual Positioning System – comprised of downward facing camera and two ultrasonic sensors, gives the Phantom real time information about where it is in relation to the ground. “This allows you to hover just a few inches off the ground so you can get those really amazing low pass shots without having to worry,” adds Michael. “It also opens up the possibility of being able to take off and land reliably with just the touch of a button.” In fact the Phantom 3 maps the coordinates of its operator so that it can return to the exact spot that it sets off from. “You can even take your hands off the controls and the platform will stay exactly where you’ve told it to, and will hold that position even in 25 mile an hour winds. We have higher precision in terms of the stabilization. This is all about control and being able to fly confidently.”

Some additions to the Pilot app now include YouTube live integration, so users can share a live view and live stream with their audience. “If you’re a journalist and want to show the immediate impact of a natural catastrophe, you can do that,” Michael suggests. As well as a promised much simpler, user friendly interface, affording control over ISO, shutter speed and exposure compensation and white balance, the new Pilot app further offers a virtual flight simulator. The thinking here is that such a feature allows new purchasers to familiarise themselves with handling, before they attempt a maiden flight. A further plus is that the relatively small and lightweight build of the Phantom means that it will fit in a backpack – meaning that this is a device that photographers will not only be able to take out on jobs (provided they have the proper Civil Aviation Authority approved training if using commercially) but take on holiday as well (personal use does not require official accreditation). The Phantom 3 Professional’s camera can shoot 4K video at 24, 25 or 30fps, whereas the Phantom 3 Advanced can shoot 1080P up to 60fps – and both are available for pre-order now.

DJI’s European Marketing Director Kevin Gordon pinpointed Unmanned Aerial vehicles as an important growth industry. He revealed that he had witnessed “an explosion of interest in UAV” and 100% market growth, predicting “global sales in the billions the next few years. That’s pretty exciting and is good news for both us and enthusiasts. We’re also opening up opportunities for independent, documentary and low budget cinema.” DJI added that it was investing to ensure the success continued in Europe and had already set up a European headquarters in the Netherlands to act as a hub for customer service across the continent.

Glamour and celebrity endorsement for the Phantom 3 launch was provided at the London launch by model and TV presenter Jodie Kidd, who revealed that she had enjoyed an early play with the Phantom and was able to tell the audience the device didn’t need a professional to operate it, its simplicity of use automatically making ‘professionals’ of its users. “It’s not just about being impressive and seriously cool, but about having one hell of a good time whilst doing it,” she suggested.

Pro photographer Phillip Bloom also popped up on video to rave about the versatility of the Phantom, which he has been using for just over a year, talking of the range’s ability to “provide cinematic views without the usual bulky gimble. Over a period of a couple of days I found myself capturing shots that I never could have dreamt of capturing before. It’s become part of the toolbox for my broadcast work. The Phantom 3 is a fantastic step up from the Phantom 2.”

Further endorsement was provided by Emma Boswell of female-led firm The Helicopter Girls, who revealed she had recently been working on the film Mission Impossible 5, and that her company was one of the first in the UK to get their CAA licence for operating drones. “Smartphones changed how we look at our lives and the same thing is happening with drones I think; we can now get shots we never could. I don’t think of a drone as a cheap alternative to a full sized helicopter: they have a perspective all of their own; it’s about intimacy and expansiveness in one fluid move.

“Nothing else can get a shot that takes you from low to the ground following a subject, like a Steadicam shot… and then travel unconstrained into the air… and then finally into that big aerial view. Shots like that have previously been the privilege of big budget feature films; but now those ambitious shots can be achieved by anyone. Drone technology is now super-accessible.”

For more information on camera drones and their possibilities an online community has been set up at skypixel.com 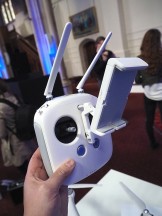 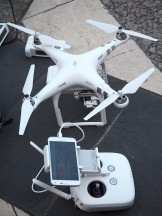 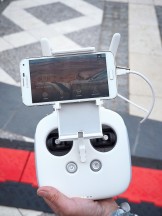 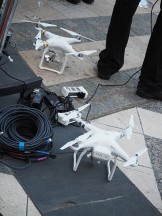 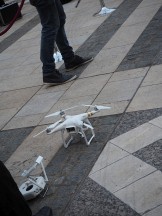 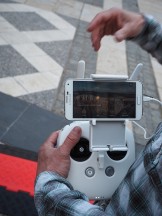 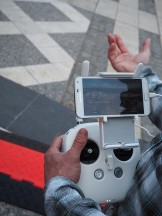 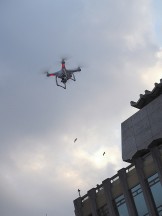 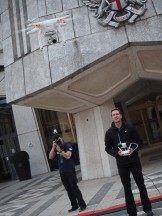 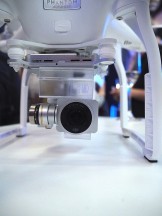 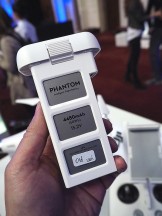 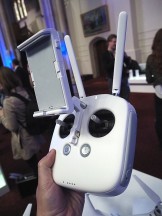 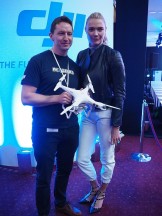 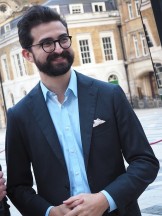 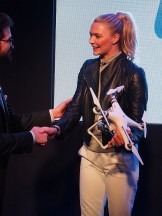