Professional freelance photographer, David Bergman, took his first GigaPan panorama of President Obama’s inaugural address, an Epic shot seen around the world. The sweeping image of the new President addressing millions of Americans has such phenomenal detail that by zooming in it is possible to recognize individual faces. Millions have visited GigaPan.org to find themselves in the crowd.

“I knew that this was an important picture, and the story I wanted to convey was the sheer size of the crowd. No single lens could have captured the scene at that quality,” said Bergman. “I couldn’t have done it without GigaPan.”

The GigaPan Epic is so easy to use, Bergman was able to capture this historic shot the very first time he used it. The Epic includes fully integrated software and works seamlessly with GigaPan.org. Everyone can capture the same incredibly detailed images right out of the box. The GigaPan Epic, complete with the GigaPan Stitcher software, is available now at www.gigapansystems.com for $379.

Here is how it works: First a digital camera is attached to the Epic, a small robotic mount that automates the picture taking process. Next, the hundreds or thousands of resulting images are downloaded to a computer and the GigaPan Stitcher software automatically combines them into a panorama. Then the GigaPan.org Web site makes it easy to post GigaPan panoramas for sharing with a global community, and the GigaPan Viewer allows people to zoom in and out to explore the panoramas in detail.

“Today we are offering the general public breakthrough high-resolution imaging technology that is the result of years of research by scientists at NASA and Carnegie Mellon University,” said Henry Hillman Jr., Founder, President and CEO of GigaPan Systems. “The potential applications for the Epic are limitless. The GigaPan.org site already features more than 10,000 panoramas, and our beta users have taken fantastic panoramas not only of President Obama’s Inauguration, but of Yankee Stadium, Chicago skylines, Hawaiian landscapes and thousands of extraordinary images.”

GigaPan Panoramas Around the World
High-resolution images captured with the beta version of the GigaPan Epic have already been displayed in exhibits around the world and online at the GigaPan.org Web site.

The City of Chicago’s new tourism Web site, www.explorechicago.org, features enormous GigaPan panoramas of Chicago. As part of the launch of the new website, millions of visitors to Chicago’s O’Hare airport will see an exhibit of 30-by 10-foot mural-size giga-pixel GigaPan photographs of iconic Chicago locations, including the skyline, Millennium Park, and the CME Group Financial Trading Floor. Photography instructor and multimedia artist Jennifer Gooch was one of the GigaPan beta users invited to take GigaPans of Chicago, and her work will be on display in the exhibit.

“The GigaPan Epic is empowering. With just a basic point-and-shoot camera the Epic allows you to create extraordinary images,” said Gooch. “As a photographer, I find the Epic to be the ultimate landscape tool. It allows me to not only take really large pictures, but also to explore the pictures in ways we’ve never been able to do before.”

The GigaPan Epic was originally used as part of a cultural exchange program, the Global Connection Project, which aims to help connect communities and people around the globe through images. Many of these images are available for viewing online with the unique GigaPan viewer, at the GigaPan sharing community, www.gigapan.org. Visit to see how GigaPan images offer viewers a new, unique perspective on the world.

Pricing and Availability
The GigaPan Epic robotic camera mount with integrated GigaPan Stitcher software and GigaPan Viewer is the first complete solution for high-resolution imaging. The GigaPan Epic is available now for $379. The GigaPan Epic 100, available soon for $449, a second model designed for larger point-and-shoot digital camera models. For more information and to purchase the Epic and Epic 100, visit www.gigapan.org.

About GigaPan Systems
GigaPan Systems was formed in 2008 as a commercial spin-off of a successful research collaboration between a team of researchers at NASA and Carnegie Mellon University. The company’s mission is to bring this powerful, high-resolution imaging capability to a broad audience. For more information, visit www.gigapansystems.com 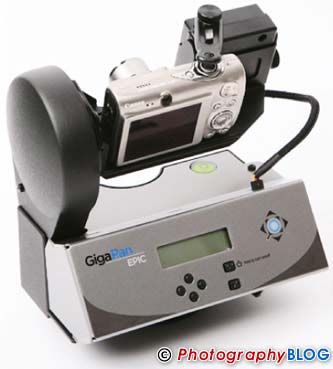