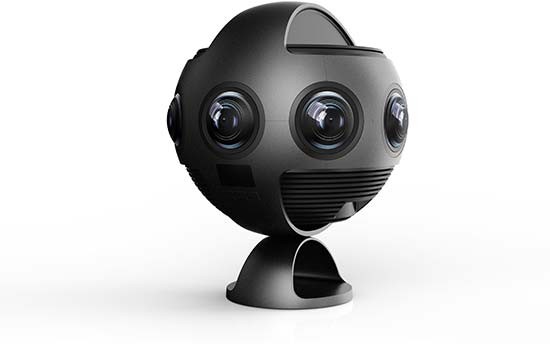 Insta360 has unveiled an eight-lens professional VR camera and a new prototype for a light field camera at CES 2018. The eight-lens professional VR camera will be capable of shooting fully spherical, stereoscopic (3D) video at upwards of 10K resolution, with 4/3” image sensors giving the camera a high dynamic range. The 6DOF Light Field Camera uses128 cameras laid out in a rectangular grid array to create 180° video with 6 degrees of freedom (6DOF), meaning viewers can “move” throughout a piece of content along six directions.

Las Vegas, January 9, 2018 – Insta360 today gave CES visitors a first look at its next wave of groundbreaking cameras, unveiling two new technologies that will let VR filmmakers immerse their audiences in experiences both more true-to-life and more interactive than ever before.

One of the new devices, an eight-lens professional VR camera, will occupy an all-new category for the leading 360° camera maker.

Capable of shooting fully spherical, stereoscopic (3D) video at upwards of 10 K resolution, this camera will be priced at roughly $12,000 USD and serve the needs of exacting VR creators at the top of their field.  4/3” image sensors will give the camera a high dynamic range and produce brilliant, noise-free shots even in low-light environments.

Specific specs, pricing and release date info will be announced at a later date.

Insta360 also unveiled a new prototype for a light field camera. Leveraging 128 cameras laid out in a rectangular grid array, the camera can be used to create 180° video with 6 degrees of freedom (6DOF), meaning viewers can “move” throughout a piece of content along six directions (up, down, left, right, backward, forward).

Effectively, this means a viewer can freely change their perspective to view the same scene from any angle they choose, exactly as we do in real life. For example, a viewer might start by looking at a person’s face from a straight-on perspective. Then, by simply tilting their neck, they would shift to a three-quarter view of the face in front of them, with the curve of the nose and cheeks taking fuller shape in real time.

The 128-camera array achieves this effect by capturing a detailed representation of both the intensity and direction of light at every point within a scene. Insta360’s prototype allows freedom of movement within a range of roughly 1.5 feet (0.5 meters) in all six directions.

While the current prototype is used to record 180-degree video, the technology that Insta360 has developed can be applied to 360° capture as well. Ultimately, this technology will allow creators to record extraordinarily realistic scenes that viewers can explore at will, achieving all-new levels of immersion.

Info on specific products incorporating Insta360’s light field technology will be shared at a later date.

Established in 2014, Insta360 creates the world’s most advanced and accessible 360-degree cameras. Designed lightweight and portable, Insta360’s products can be used for tourism, real estate, journalism, events and conferences, and by intrepid storytellers everywhere. Insta360 empowers users to create virtual-reality (VR) content and broadcast immersive experiences to the world with 360 live-streaming.