Is this the End of the SLR Camera?

Our third Christmas guest writer, photography website editor Ian Burley from DPNow, considers if the days of the SLR camera are numbered.

SLR cameras are special, aren’t they? The first time you pick up an SLR, peer through the viewfinder and release the shutter, if was the same for you as it was for me (all those years ago!) , it was a watershed experience;  rather like driving a car for the first time. The viewfinder, the mechanical whirr, clunk and click of the mirror and shutter operating in tandem, and the reassuring interchangeability of the lens, they all add up to a feeling that never goes away. An SLR has purpose, a mechanical assuredness, almost infinite potential. It’s exhilarating and satisfying in use and makes one look down upon compact cameras with a sense of diluted respect.

But is the SLR camera era under threat? Will many of us never fulfil long-cherished ambitions to own an SLR? Might existing SLR users abandon their old reflex passion… for something new?

I’m referring to the new generation of camera that people are still trying to classify, an interchangeable lens system camera that is not an SLR, nor a rangefinder camera. Panasonic Lumix has produced the first of its kind, the Lumix DMC-G1. Actually an evolution of the Olympus-inspired Four Thirds DSLR platform that Panasonic Lumix is a member of, the new camera is another Panasonic/Olympus joint venture, called Micro Four Thirds. It’s called ‘Micro’ because the new cameras and lenses are smaller and lighter than DSLRs, but have the same size sensor.

The G1 actually looks like a DSLR, but inside its diminutive body there is no mirror, no pentaprism, and so no through the lens (TTL) optical viewfinder. That acronym, ‘EVF’ , dreaded by many who have experienced the noisy and flicker electronic viewfinders of so-called bridge cameras, lies at the heart of the G1. The good new is that Panasonic has managed to raise the bar on Electronic ViewFinder technology to a point that many are saying this technology could at last spell the end for SLRs, digital or otherwise. Or will it?

Make up your mind, I hear you say! But I’m only reflecting the confused debates that have already addressed the arrival of the non-reflex interchangeable lens system camera. Some are convinced that the SLR concept, which actually dates back in part to the 1880s, is well past its sell-by date and digital electronics must inevitably make the modern DSLR’s electro-mechanical mirror and prism obsolete. Others dismiss the notion that an electronic viewfinder will ever be a satisfactory alternative to an optical reflex viewfinder.

I actually think that much of the debate has completely missed the point, certainly for this stage of the evolution of cameras like the Panasonic Lumix G1. Around 130 million digital cameras, excluding camera phones and pocket computers with built in cameras, were sold globally during 2007. But only 7% of this figure represents SLRs. Panasonic believes that there is a huge untapped market for cameras like the G1, outside of the SLR market. Market research suggests that many people baulk at the opportunity to upgrade to a DSLR, largely because they are seen as too large, heavy and bulky. There is even research that suggests many people don’t like SLR viewfinders.  The electronic viewfinder experience is closer to that of users of compacts, so familiarity is maintained. 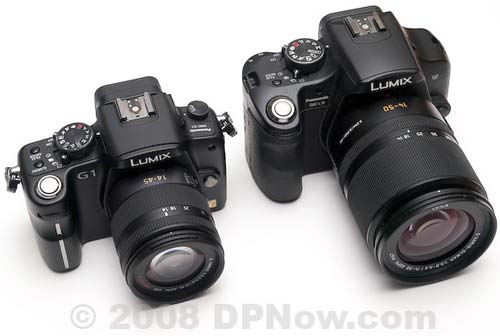 So why is the G1 smaller than a DSLR? For technical reasons surrounding the space that is taken up by the mirror box in SLRs, lenses for SLRs tend to be physically large. Without the need for a mirror box, new-generation cameras like the G1 can not only be smaller for a start, but their lenses can be significantly smaller and lighter as well.

Panasonic hopes that the market for G1-style cameras will, ultimately, be larger than that for SLRs. And there are already widespread rumours that Panasonic’s competitors have seen the light and are now developing their own ultra compact non-reflex system cameras.

It’s likely that some DSLR owners will supplement their existing camera with something like a G1 for convenience and practicality. So there is an overlap with the DSLR market, but will it actually replace it? I have to say that, given time, the answer is yes. But how long it will take is another matter.

Biography
Ian Burley has been taking pictures since his parents gave him a plastic roll film camera 40 years ago. Skiving off sports at school in favour of long afternoons in a stuffy photographic dark room was the norm. Ian studied computer science at university but his schoolboy summer job in a camera shop later turned into his first full time job. The call of the digital revolution eventually lured Ian in to a career as an IT journalist, but photography was never far away and in the late 90s Ian was able to return to his photographic roots by specialising in articles on digital imaging. He now runs three photography websites, DPNow.com, FourThirds-User.com, The Olympus UK E-System User Group, and is a regular contributor to What Digital Camera magazine.

If you have wondered how lenses can be shrunk simply by removing an SLR’s mirror box, Ian explains all.

All images in this article © Ian Burley