The Leica S2 is a completely new digital SLR camera system, offering a 37 megapixel, 30x45mm sensor that’s 56% larger than full size 35mm. Designed from scratch in consultation with professional photographers, the Leica S2 does not use a conventional medium format or 35mm platform. The S2’ bespoke Kodak CCD sensor has enabled the Leica designers to produce the smallest camera in its class, sitting between the Canon EOS 5D and 1Ds Mk III DSLRs in size. The Leica “MAESTRO” image processor developed with Fujitsu specifically for the LEICA S2, allows the camera´s lenses, firmware and sensor to function at their optimum, producing market leading processing time and the highest level of picture quality with minimal energy output. Nine new lenses will be developed for the new Leica S-system.

Update 1: We have a gallery of 20 photos of the Leica S2 and assorted lenses, including an exclusive side-by-side comparison of Leica’s new DSLR with a Canon EOS 5D, and we’ve also posted our initial impressions of using the S2.

Update 2: Find out why the S2 is not called the S1, which parts of the S2 have been developed exclusively by Leica, and if the R10 will ever see the light of day - just click the continue link below…

We’ve had the opportunity to try out the Leica S2 digital SLR with the Summarit-S 70mm f/2.5 standard lens mounted. We’ve taken 20 photographs of the new S2 for you, including what may well be the world’s first comparison shots with a Canon EOS 5D, so that you can get a more accurate idea of the size of the new Leica. What might not be so readily apparent in these pictures is the incredibly robust build quality of the S2 – it seemed almost indestructible.

In terms of handling, the Leica S2 sits very comfortably in the hand thanks to its large, rubberised grip and ergonomic DSLR-like design. The viewfinder is among the best we’ve ever seen, huge and bright for precise framing and focusing. The auto-focus was pleasingly fast for the dim lighting, while the mirror slap was quite loud, just as you would expect from such a big mirror, and was accompanied by a whining motor sound. The Leica S2 has dual memory card slots for Compact Flash and SD/SDHC.

The user interface of the Leica S2 is radically different to that of most SLRs. The handling relies heavily on “soft menus” instead of a lot of external controls, which will require some getting used to but looks like it could very easily become second nature to anyone using the S2 on a regular basis. Apart from four large, unmarked buttons on the back of the camera, there’s only a command wheel and a conventional shutter speed dial, but after a bit of practice one finds that changing settings on the fly is actually quite straightforward.

There is no clear indication of the price of the Leica S2 or the lenses, but the company’s representative has told us the pricing will be “competitive” for the segment the new system intends to compete in when it’s launched in Summer 2009.

At a press conference held on the 24th September 10am CET at Photokina, Leica shed some more light on the new S system they announced the day before. Mr Andreas Kaufmann, CEO of Leica Camera AG, reminded the assembled press that as early as 1996, Leica already had a product called the S1, which was a 40-megapixel scanning camera that „had no equal in resolution, dynamic range and colour depth”. While that model never went into serial production, it can still be considered something of a milestone, and by calling the new system camera the S2, Leica are apparently trying to emphasise the continued tradition of breaking new ground in the top end of the market.

Kaufmann referred to the S2 and the new S system in general as „the best-kept secret Leica ever had”, a project internally codenamed ‘Afrika’, derived from the acronym ‘AFR’ for AutoFocus single lens Reflex’. He was keen on stressing that the new camera and lenses were developed - and will continue to be produced - in Germany, and that the new body was „smaller and lighter than all comparable competitors’ medium format cameras”. And while the sensor is sourced from Kodak and the image processor from Fujitsu Microelectronics, the autofocus system has been developed by Leica themselves, „from the ground up”.

An interesting feature of the new system is that although there is a focal-plane shutter in the camera body, some of the lenses also have an integrated leaf shutter, in order to enable the photographer to achieve flash synchronisation with high shutter speeds. The company has also made the bold claim that the S-lenses are going to be the new reference points „for the whole camera market”, for allegedly providing „maximum contrast, optimal resolution” even when wide open and from their closest focus point to infinity.

Leica officials also talked about their strategic alliance with Phase One, which extends to software, development, marketing, servicing and customer support, effective Summer 2009 (when the market launch of the S system is planned).

On a final note, Kaufmann reassured everyone present at the press conference that more new products were coming, among them a new R system camera, the R10, although no information was given as to its availability, pricing or specifications.

Cologne, Germany — September 23, 2008 – Responding to the commercial needs of professional photographers, Leica Camera AG in Solms will introduce the Leica S2 at photokina in Cologne (23rd-28th September 2008), a new digital Leica SLR camera system for professional photographers. A new system concept has been developed, entitled “Made in Solms”. For this camera concept, renowned professional photographers have been involved in all parts of the development process. The outcome is a system designed specifically to deliver the fastest, high end resolution work, requiring the minimum of post production. Excellent news for commercial photographers seeking to exceed demanding client expectations in a working time which allows improved income for their talents.

Designed from scratch the new German made camera is ground breaking, as unlike most other pro digital systems, it does not use a conventional medium format or 35mm platform. The LEICA S2 has a sensor size that exceeds the 35 mm format and incorporates many of the advantages of professional systems. The new 37 mega pixels CCD sensor with a breathtaking image resolution will produce images at the top of the professional game for a number of years. In particular, the lenses set new performance benchmarks enabling the sensor to overdeliver per pixel. The pixels are distributed on a sensor 56% larger than full size 35mm.

The compact design and handy metal body is smaller than those of comparative products from different manufacturers. Ergonomic and a pleasure to use, the camera is set to become a professional photographer´s favourite. The camera´s bespoke sensor has enabled the Leica designers to produce the smallest camera in its class.

In spite of the sensor size, the extremely compact body is fully protected against dust and splashes. For this class of camera, the LEICA S2 has a particularly precise and quick autofocus system that makes focusing easier. The large, bright viewfinder makes picture composition easy. Taking many pictures in quick succession is also possible, and there is a high sensitivity setting to use when lighting is problematic.

New lenses designed specially to suit the demands of this format offer unrivalled imaging quality and set new benchmarks for the camera market as a whole. Thus the LEICA S2 lens system meets the needs of professional photographers. The optic calculation incorporates all the factors and requirements of digital technology, meaning that software to correct image artifacts becomes superfluous.

The constant high image quality is present right into the corners of the images, from close up to infinity. Even at wide apertures, maximal contrast, high resolution and detailed colour reproduction are guaranteed. The between-the-lens shutters in some of the system lenses enable lightning fast synchronisation for the quickest possible exposure time. The quick and precise autofocus of the Leica S lenses can be adjusted manually at any time. Like the camera, the lenses are made from metal and come with a weatherproof seal. The lenses are thus particularly robust and protected from dust and dampness.

The LEICA S2 is particularly easy to handle and choosing the settings is pretty much intuitive. Ergonomically designed, the body sits comfortably in the hand whether in vertical or horizontal position. The bright, high-resolution display with quick zoom-in function enables exposures to be seen perfectly even in daylight. The camera concept can be integrated seamlessly into the professional digital workflow.

With Dr. Andreas Kaufmann as its main shareholder, Leica Camera AG is entering a new era. Following in-depth and successful re-structuring, the business can now concentrate on investing in new products. Leica has made a quantum leap in the field of digital technology, enabling it to combine the advantages of highly developed digital technology with the classic Leica values concerning optics, mechanics and optimal image results. The result of this is uncompromising cutting-edge technology; the LEICA S2 is the first to offer all these things to professional digital photographers. The LEICA S system sets the trend for future Leica products in terms of technology and leads the way for future product ideas from Leica Camera AG. 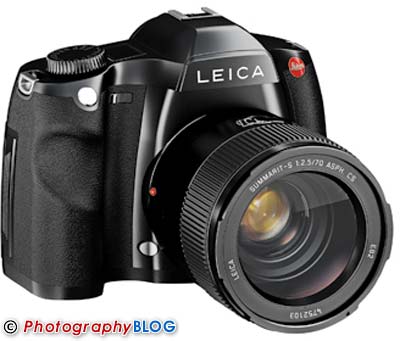 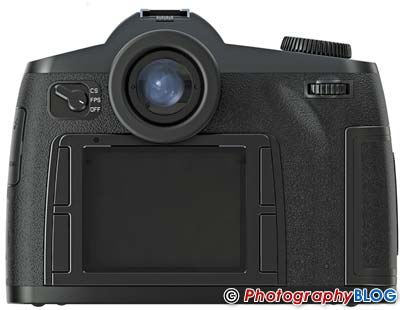