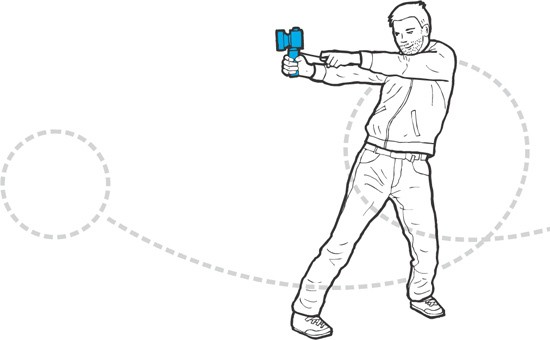 Lomography has announced the Spinner 360°, a fully mechanical camera that captures 360° panoramas on 35mm film with a spectacular spin. Simply take the Spinner 360° in one hand, pull the trigger-cord with the other and release it – in a split second the camera spins 360° around its own axis and records everything that’s around you on a frame more than 4 times longer than a conventional landscape picture. For best results, it is recommended to load the Lomography Spinner 360° with ISO 400/27° film. Given the size of the panoramic images, you can expect to manage approximately 8 frames on a standard 36-exposure roll.

• From 360° to infinity: literally the most freewheeling camera on the planet that enables 360° to infinite panoramic shots on 35mm film
• Pull and spin: one pull of the trigger-cord sets loose this panorama-go-round revolving on its axis
• Longing for longitude: Creates up to eight full 360° panoramas on a 36 exposure film
• Sprocket pan power: filling the whole width of a 35 mm film roll with panoramic Lomographs – sprocket holes included
• Rubberized motion: Rubber band drive and fully manual controls work without batteries
• Do the Rollercoaster! 10 special shooting styles are waiting to set creativity on fire

PULL AND SPIN
We are especially proud to announce the Spinner 360°, a fully mechanic camera that captures infinite panoramic shots on 35mm film with a spectacular spin. First class as well as wild style 360° photography has never been this accessible and thrilling. The Spinner 360° even exceeds the human perception and captures a full 360° vision which puts the Lomographer in the middle of a new lomocentric universe. Set in motion by pulling the trigger-cord with simple manpower, the rubber band drive lets the Spinner 360° revolve on its grip in perfect shutter speed. Featuring two aperture settings, this freewheeling fellow is the perfect companion for panoramic adventures indoors and outdoors. Fed with 400 ASA 35mm film for best results, it captures everything in its sight on a frame multiple times longer than a conventional landscape picture. A panorama-go-round of the special kind for Lomographers that love to spin!

SPROCKET PAN POWER
When it comes to extremes, the Spinner 360° is in a class of its own. While it produces ultra-long 360° photographs, it also makes the most of the whole film roll in an eccentric way. Exposing the full width of a film roll the Spinner 360°’s Lomographs are characterised by the display of the sprocket holes that add a little extravaganza to every breathtaking panorama. No matter if it spins on the top of the Empire State Building or in the middle of the Serengeti, no tiny bit of the film roll will be wasted. Because of using conventional 35mm film, these shots can be processed even in the most remote lab, so that a spectacular spin is always at hand.

SPINNER LOMOGRAPHY
Spinning away with a mechanic masterpiece like the Spinner 360°, offers a whole new perspective on space, time and human perception when exploring the unlimited creative possibilities and techniques. To tickle your creativity a little bit, we developed ten unique shooting styles for the Spinner 360° that will open up a never seen before view. Why not explore the world while doing the “Rollercoaster”? Instead of holding the camera on a horizontal level it is held aslant. As the camera rotates in one full circle it produces images in wavelike perspectives and the whole world magically transforms from a flat surface into a rollercoaster of forms and figures. How about rethinking our conception of time and space while doing the “Timescan”? Or going upside down with the “Footloose” style? Even the long tradition of self-portraits will be revived through the “Hipshot”, scanning your body from the hip. There are at least ten possible styles to spin the Spinner 360° and a whole lot are waiting to be discovered, so start spinning!