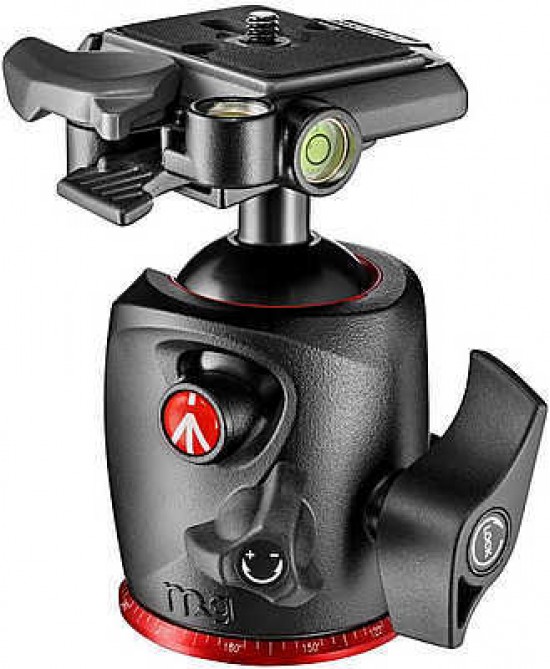 Manfrotto have just launched their new Xpro ballhead, designed for advanced hobbyist photographers and experienced professionals. Completing the Xpro Heads range that is dedicated to the new 190 and 055 tripods; the new Manfrotto Xpro ballhead features the manufacturer's Triple Locking System, which consists of 3 wedges that apply pressure to the sphere to lock it in position, as the ball lock lever is rotated. The head weighs a mere 0.5 kg, but can support up to 10kg of payload. The Xpro ballhead is available in two versions that are distinguishable by the coloured finish on their magnesium body: the black version (£114.95/$149.88) comes with the Manfrotto 200PL plate, while the grey version (£159.95/$199.88) comes with the safe and rapid Top Lock System featuring the Manfrotto MSQ6PL Arca-Swiss compatible plate.

Designed for passionate, advanced hobbyist photographers and experienced professionals, the new XPRO Ball Head completes the XPRO Heads range that is dedicated to the new 190 and 055 tripods. It ensures three essential features to photographers: extreme precision, thanks to its Triple Locking System; portability, with the magnesium body; simplicity and convenience, thanks to its 200PL and Top Lock camera plates.

Introducing a new sphere lock mechanism, and triple locking system, the XPRO Ball Head is a state of the art head in the Manfrotto Center ball heads range. The triple locking system guarantees the camera position stability and avoids drifting. It consists of 3 wedges which apply pressure to the sphere to lock it in position, as the ball lock lever is rotated. The new polymer rings mean that photographers can count on extreme accuracy, and together with the sphere’s PTFE treatment the head ensures smooth, accurate and less jerky camera movement. The innovative sprung system means that, should the lever butt against something during the locking movement, it is possible to pull the lever and rotate to avoid any interference and reposition so it is ready for use.

Its magnesium alloy body, together with the new hollow sphere, enable the XPRO Ball Head to guarantee high payload performance while maintaining an extreme light structure.

To match various needs, the XPRO Ball Head comes in two plate versions, each with a specific plate. The 200PL is the most common Manfrotto plate: its compact size and lightweight aluminium construction allow it to stay constantly attached under the camera and it is ideal for advanced hobbyists who look for a practical, easy to use product. The Top Lock is an innovative solution for experienced professionals, who need to feel totally secure even when using heavy and expensive high-end camera gear.

Manfrotto is the world leader in the design, production and distribution of professional products for photography, video and entertainment. The company was founded in 1972 based on Lino Manfrotto’s experience, and its mission has always been to support and simplify the work of reporters, photographers and producers. The Imagine More project adds to this historical mission the idea of fuelling the enthusiasm of weekend photographers and supporting the surge of new amateurs. Part of the UK-based Vitec Group since 1989, Manfrotto has now become a worldwide presence. In its eight key markets – Italy, France, Germany, the United Kingdom, China, Japan, Hong Kong and the United States – it is represented by its own direct distribution system, Manfrotto Distribution, whereas in 80 other countries sales are handled by independent distributors