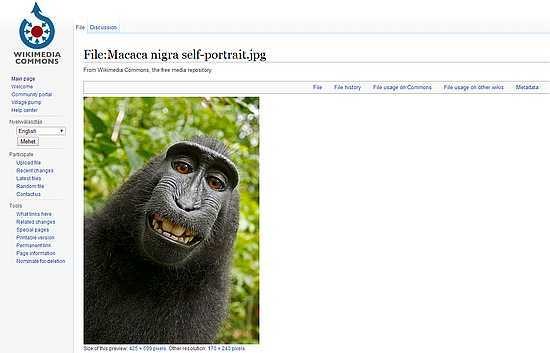 Back in 2011, British wildlife photographer David Slater was out and about photographing black macaques in the jungles of Indonesia when he noticed that one of the animals had snatched his camera and started snapping away with it. Most of the photos ended up being (predictably) blurry but a few of them, including a couple of self-portraits, turned out to be exceptionally good and earned Mr Slater international recognition. A few years later a Wikimedia editor added the shots to the Wikimedia Commons collection, making them freely available to anyone; which in turn prompted the photographer to file a request for removal on copyright grounds. The foundation has turned down the request claiming that "there was no one on whom to bestow copyright" as the picture had been taken by the monkey itself rather than the photographer. Ready to fight for his rights, Mr Slater is now taking the case to court. Even though it is not exactly common for animals to take photos of themselves, the ruling - whatever it may be - is likely to have far-reaching consequences as many wildlife shots are routinely taken without the photographer actually tripping the shutter (remote cameras, intervalometers and focus traps come to mind). If the court were to rule that these images are "lacking human authorship" and cannot be registered for copyright protection, the authors of such images might need to start worrying. (The illustration above shows one of the disputed Wikimedia entries as it appeared at the time of publication.)