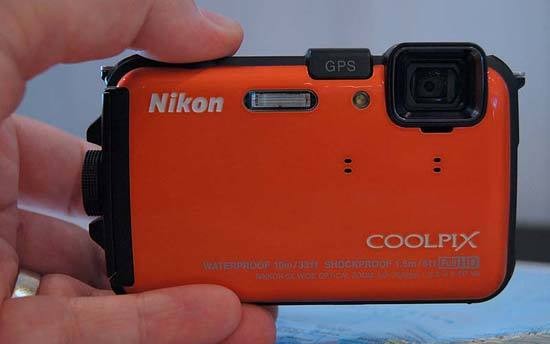 The Nikon Coolpix AW100 is the company’s first steps into the world of tough cameras. Built to last and filled with features to dominate the market, the AW100 sports a 16 megapixel CCD sensor, 5x optical zoom, 3 inch LCD and EXPEED C2 processor. On top of that, the camera can be plunged into water down to 10 metres, dropped from a height of 1.5 metres and taken to freezing locations as low as -10 degrees. It also has a built-in GPS system with on-board maps to help tag your pictures on Google Maps when you get home.

It’s interesting that the Nikon Coolpix AW100 has a similar design to other tough cameras out on the market at the moment, as if there’s some universal acknowledgment that they all must have the lens in the top right corner of the body. But of course, that’s not the case. To ensure that the camera is fully watertight, it can’t have a lens that pops out when it’s switched on. Instead, a periscope mirror sits behind the lens, the sensor is placed either on the bottom or the side of the camera body and the zoom slides up and down or side to side. It’s a technique that was used by Minolta. Yes, that long ago.

The AW100’s sensor is a 16 megapixel back-illuminated CMOS sensor. CMOS (Complimentary Metal Oxide Semi-conductor) is known for being more robust than a CCD (Charge Coupled Device). It also yields a lower power consumption. The drawback is that it’s generally not as sharp as a CCD. Back-illuminated sensors have the circuitry on the rear, making them look as though they’ve been fitted backwards – hence the name. The circuitry normally blocks some light from getting on the photo-sites. So putting that circuitry on the back opens up the full photo-site, making it more responsive in low light and produces pictures with lower noise at similar ISO settings.

To make sure the camera is ready to take pictures again as soon as possible, the AW100 is fitted with Nikon’s EXPEED C2 processor. This processor has previously only seen action in the DSLR range so it’s good to see the technology be introduced to digital compact cameras.

For all of you adventurers out there, the AW100 is designed for you. Nikon have thought hard about this and made sure that if you’re into your extreme sports, the AW100 is the camera you need to have with you. On the back, the camera has lots of little buttons which aren’t a good idea for people who are skiing and have big, thick gloves on. So what Nikon have introduced is the Action Control button. It’s a name that sounds like it should have an exclamation mark after it, but it’s a large button on the left side of the camera. If you’re out and about, instead of having to take time to remove your gloves to take a picture, press the Action Control button, shake the camera and it will scroll through the modes. This will take precious seconds off the time it takes to set the camera up allowing you to get the shot you want.

On the opposite side of the AW100 is a big, fat wheel that opens the memory card and battery door. The shutter button isn’t that big unfortunately and if you want to use the zoom, you have to make do with the tiny one on the back. A finger operated rocker for the zoom at the shutter button would be a good idea here.

The Nikon Coolpix AW100 has a built-in GPS system that tracks the cameras whereabouts while the system is switched on. It’s also possible for the camera to track while it’s switched off and though this does use more battery power, Nikon say it’s minimal. The GPS will work in a bag which is better than some we’ve seen recently, but it won’t work in a building or long tunnel. It’s also possible that if you go under cover and come back out quick enough, the system will be able to join the dots. It will then work with the EXIF data on photographs you take to work out where you were when you took them. This is great for sharing pictures with friends or if you’re travelling around the world and want to show your journey as well as your pictures.

So the Action Control button and the enhanced GPS should be enough to entice the adventurous photographer to look at Nikon over competitors. The tough features aren’t anything new. Every other tough camera on the market has a similar robustness as the AW100. The screen has 460,000 dots which isn’t the best one that Nikon do and it could’ve been a good idea to put the better version on because this will be used in murky water and bright sunlight, it needs to be really good.

With the extra features that the Nikon Coolpix AW100 has, it’s certainly an attractive option when it comes to buying a tough camera. The orange is a lovely colour and we’re pleasantly amused by the camouflage version, too.

The Nikon Coolpix AW100 will be available for sale in early September, so keep an eye out for our full review.