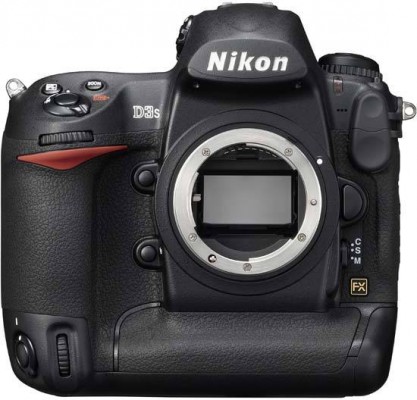 Nikon today announces the introduction of the D3S, the camera that enables professionals to take control of the unpredictable and extends the possibilities for action photographers everywhere. Built upon the widely acclaimed Nikon D3, the D3S advances low light photography to another level and sets in motion new creative options for multi-media movie shooting.

Robert Cristina, Manager, Professional Products for Nikon Europe, comments: “The D3S rewrites the rules for extreme low light photography, enabling photographers to take control of ambient light. Professionals from all over the world have contributed to making the best even better.”

It’s what we need, now
Francois Marit, Photo Technical Manager at global news provider, Agence France Presse, said: “Since we started using the Nikon D3, we have also been exploring movie capture to see exactly how it can help us. Now the D3S gives us exactly what we need, the ability to shoot pictures and movies with one piece of professional equipment. This enables us to transmit complete packages of still images and movie clips from the thousands of news and sports events we cover every week, and will really give us the edge in both online and print formats”

Bill Frakes, one of the first professional photographers to trial the D3S, said: “I make career decisions in milliseconds and I want the best possible image quality every time I push the button. I need a camera that responds precisely, quickly and consistently. The D3S does that and more and this gives me enormous freedom.”

When flash is not an option
The D3S features a completely re-designed 12.1 effective megapixel image sensor. The large pixel pitch, with a completely modified inner structure, means that the D3S can capture images under light conditions which were previously believed to be impossible. The seven stop ISO range of 200 – 12,800 enables image and movie capture in extremely low ambient light conditions which is essential for today’s news and sports photographers.

Further proof of the D3S’s incredible capacity for low light photography is the fact that it is the first camera to offer no less than three additional ISO boost levels, up to Hi-3, (ISO equivalent of an astounding 102,400).

FX format HD movies
The D3S delivers a new look and feel to the emerging trend of DSLR movie capture and exploits the creative depth-of-field effects offered by the large FX-format sensor and the benefits of wide aperture NIKKOR lenses, the lens of choice for the world’s leading photographers. Instant and intuitive in use, the D3S’s D-movie function is prioritised for high productivity.

Movies are captured at 720p/ 24fps in motion JPEG with stereo sound using the input jack. The file format enables a unique ‘Save Selected’ frame option that enables the user to shoot video freely, secure in the knowledge that a still image of a key moment can be transmitted as well.

Image sensor cleaning
Following extensive feedback from professional photographers, the D3S implements a new image sensor cleaning function that generates vibrations at four different frequencies to reduce the impact of static dust collection on the optical low pass filter of the image sensor. This has been implemented without impacting on the 100% viewfinder coverage expected from a flagship, professional D series camera.

Total flexibility
The D3S now offers no less than three alternative crop modes, all masked automatically in the viewfinder. The photographer can now choose from 5:4 (30x24); 1.2x (30x20); and DX (24x16). The new crop mode is designed to offer a practical combination of lens magnification and slightly reduced file size.

When discretion is required
The D3S features a new Quiet shutter release mode that enables the photographer to mitigate the sound caused by the mirror return. Suitable for wildlife photography and other situations where shutter noise might distract the subject, this innovation again reflects and responds to practical feedback from photographers using Nikon’s D3 series cameras.

In camera post processing
Another aid for increasing productivity in the D3S is the new RAW processing options in the Retouch menu. The following image settings can be applied to RAW (NEF) files in the camera on-the-fly: JPEG compression, Size, White Balance, Exposure Compensation, Picture Control, Noise Reduction, Colour space and Vignette Control settings. These options accelerate post production workflow for the busy photographer on the road, by reducing the need to use a PC and Capture NX2 software.

Ready for anything
The D3S redraws the boundaries for photographers allowing them even more control over unpredictable subjects in testing lighting conditions. The camera sensor is so sensitive that it can capture subjects that are practically invisible to the naked eye and render results that are remarkably clear of noise and ready for print. The weather-sealed durable magnesium construction is built to withstand extreme temperatures and humidity to enable users to complete assignments faster and more efficiently.