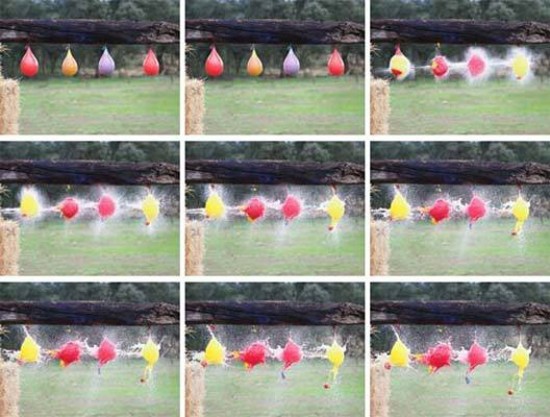 The new Olympus OM-D E-M1 Mark II camera has an innovative Pro Capture mode which should make it easier to capture that decisive moment. Simply set the shooting mode dial to the Pro Capture setting, then press and hold the shutter release button halfway. The E-M1 Mark II will then continuously buffer a series of full resolution 20 megapixel JPEG / RAW images until you fully press the shutter button, at which point it will capture the image plus the 14 previous frames. If you want to take full advantage of the E-M1 Mark II's amazing 60fps shooting rate, continue to keep the shutter release fully depressed to take up to an additional 99 frames.

I was able to try the Pro Capture mode out whilst photographing an archer who was shooting arrows through a series of water balloons. I half-pressed the shutter release button, then fully pressed it when the archer let go of his arrow, and continued to hold down the shutter to fire at the full 60 frames per second rate. The Olympus OM-D E-M1 Mark II was able to capture a sequence of images with the balloons intact, then the arrow going through the ballons with the water exploding. And remember, the E-M1 Mark II can do this whilst capturing full-resolution, 20 megapixel Raw files!

Here's a 2 second video clip at 30fps showing the 60 frames.

And here are the same 60 frames laid out in a grid.