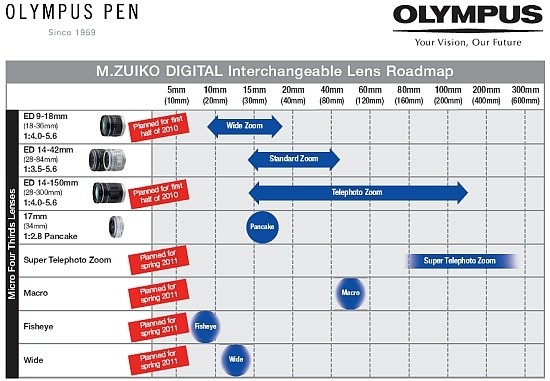 Olympus has published a roadmap for its Micro Four Thirds lens releases over the next two years. Apart from the existing two lenses and the two zooms planned for 2010, there are four lenses planned for spring 2011. These include a telephoto zoom and three primes including a 50mm macro, an 8mm fisheye and a wide-angle lens whose exact focal length is hard to determine from the roadmap. Currently, there are two Olympus-branded Micro Four Thirds lenses available, including a 14-42mm zoom and a 17mm “pancake”, plus one Leica- and five Lumix-branded optics, with two more Lumix lenses coming, according to Panasonic.