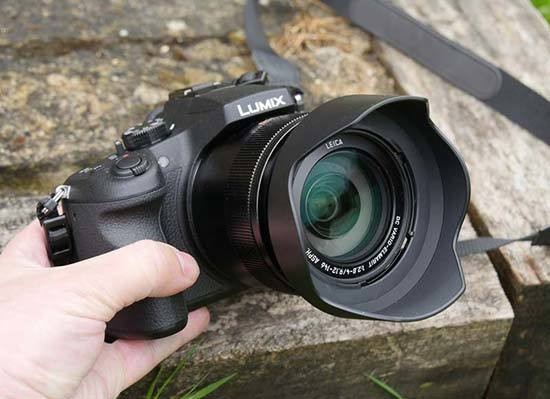 See exactly what the new Panasonic Lumix DMC-FZ1000 superzoom compact camera looks like in the flesh, and read our initial hands-on review.

The new Panasonic Lumix DMC-FZ1000 is described as a “premium bridge camera that pushes boundaries – an epoch product,” according to Panasonic’s DSC Product Manager Vic Solomon, who at the UK launch at the Fox Talbot Museum in Wiltshire, UK reminded us that this was all the more incredible for the fact that the Lumix brand is still only 12 years old.

Rather than the standard 1/2.3-inch sensor, the FZ1000 features a one-inch CMOS chip offering 20.1 effective megapixels. It is also equally notable for a focal range that stretches from an ultra wide 24mm to 400mm in 35mm terms.

The lens here is a Leica branded 16x optical zoom with aperture of f/2.8-4.0, supported by a five-axis hybrid OIS system.

“We didn’t want to scrimp on anything – we wanted a lens that was best in class,” added Solomon. “It provides beautiful ‘bokeh’ without an onion ring effect and is a third of the weight of an equivalent DSLR kit.”

Posing the rhetorical question ‘who buys a bridge camera and why’, Panasonic answered by suggesting customers “male and middle aged, from a higher socio-economic group and typically 45-years-old upwards. Some 69% of these customers are parents whose children have by and large grown up. A lot of them don’t work but want to be active in their leisure time.”

Another possible audience for the camera that Panasonic envisages is hobbyists, in particular bird watchers, and well as outdoor photographers in general and those looking to shoot family events – the three favourite pursuits of those owning a bridge camera, it believes.

Back to the specifics of the camera, which includes a newly developed Venus Engine processor. It’s also the world’s first compact camera with 4K video shooting ability and allows photographers to grab a frame from a sequence and export it as a still image, quality being comparable to a standalone 8 megapixel photo. This obviously has potentially big implications for how future FZ1000 users choose to shoot with the camera. Time lapse and stop motion animation capability is also offered.

“Nothing else in our range is at this level,” Panasonic’s Solomon enthused. In terms of speed and response times the FZ1000 offers faster auto focus at the telephoto end of the lens, a quick start up time and high speed OLED display. It also features DFD (Depth from Defocus) technology, 49 area AF, both face and eye detection technology, seamless 1-area AF, pinpoint AF, and a new shutter speed of 1/4000 second. Also new on this camera is an electronic shutter facility, for when its users want to shoot in total silence and avoid distracting their subject/s.

Other features of note include: a 2,359K OLED EVF and 921K dot free angle LCD, plus in-camera processing of Raw files and a Creative Control mode with 22 filter effects. Keeping matters up to date we also have Wi-Fi functions including NFC and QR code connectivity options, plus remote shooting via downloadable Panasonic ‘app’ which includes a photo collage function. Images can also be geo-tagged, whilst 12fps burst shooting, as on the GH4, is further offered.

Mid July availability is promised for the Panasonic Lumix DMC-FZ1000 FZ1000 at a suggested UK retail price of £749.99 and there will be a scheme whereby those who pre-order the camera will receive a free battery and case. 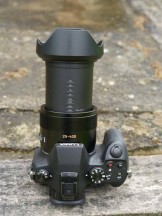 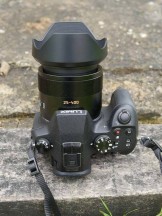