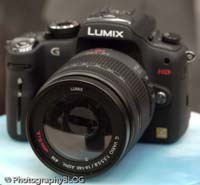 World Exclusive! The Panasonic Lumix G HD camera has been unveiled ahead of Photokina. Shown as an advanced prototype under glass, we were among the first journalists to see the Panasonic G HD, identical to the G1 except for added video capability. A small Record Video button has been added to the rear grip of the Lumix G HD, and a large mic/speaker on top of the camera. No specific details were given about the particular High Definition mode that will be employed. The Panasonic Lumix G HD will be launched in Spring 2009. Click the continue link to see a gallery of pictures of the hot-off-the-press Panasonic Lumix G HD.

Update: We’ve now added in-hand photos of the three prototype lenses planned for release sometime in 2009 - the 20mm pancake, 7-14mm wide-angle, and 14-140mm telephoto. Seeing these tiny lenses in the flesh, especially the 20mm pancake, really shows what the Micro Four Thirds system is capable of.

Click the thumbnail images to view a larger version in a new window.