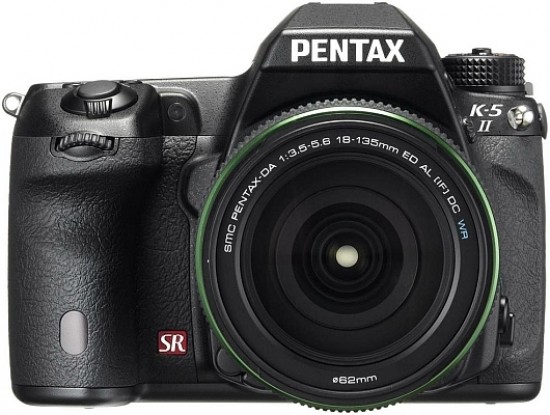 The Pentax K-5 II is a sixteen-megapixel digital SLR camera with an APS-C sized sensor and a completely new Safox X AF module that remains operational down to -3EV. Coupled with an upgraded AF algorithm, the camera is claimed to deliver exceptional AF performance, including such features as a select-area expansion function, which automatically tracks the subject even when it moves away from a pre-assigned select point. Launched in conjunction with the Pentax K-5 II is the Pentax K-5 II s that comes without an anti-aliasing filter for superior resolution. The Pentax K-5 II is available from early October for £799.99/$1,199.95, while the Pentax K-5 IIs carries a body-only price of £949.99/$1,299.95. The K-5 II is also available in a kit with the 18-55mm WR lens (for £869.99/$1349.95) and in a bundle with the 18-135mm WR zoom (for £1,119.99/$1,549.95).

The PENTAX K-5 II is the latest model in the PENTAX digital SLR K series, featuring a newly developed, state-of-the-art AF sensor that boasts the widest range of exposure values in its class*

This new model is designed to be the successor to the PENTAX K-5 (launched in October 2010), which has been very well received for its compact, solid, functional body and high-quality image reproduction.

The K-5 II boasts a range of advanced functions and user-friendly features. These include a newly developed AF sensor assuring a broader AF working EV range, which lends itself well to a variety of shooting conditions and photographic requirements.

1. A new SAFOX X AF module for the top AF performance in its class

SAFOX X can work with luminous flux based on F2.8 levels as well as at F5.6. This vastly increases the AF accuracy when used with very fast lenses.

Coupled with an upgraded AF algorithm, the camera delivers exceptional AF performance, including such useful features as a select-area expansion function, which automatically tracks the subject even when it moves away from a pre-assigned select point. This function is enabled as the distance data is assessed when collected by neighbouring focus sensors.

The K-5 II comes equipped with a 3.0-inch, wide-view, airtight LCD monitor with approximately 921,000 dots. Sandwiched between the front glass panel (which is coated with an anti-glare film) and the LCD screen is a unique resin layer that cuts down the reflection and dispersion of light to effectively prevent ghost images and greatly reduce loss of brightness. The front panel is made of tempered glass to keep it scratch free.

With its large sensor measuring 23.7mm by 15.7mm with approximately 16.28 effective megapixels, the K-5 II’s latest-generation CMOS image sensor assures high-speed image data readout. By coupling this high-performance image sensor with the acclaimed PRIME II (PENTAX Real Image Engine), the K-5 II delivers super-high resolution, rich-gradation digital images free of digital noise over a wide sensitivity range — from ISO 100 to ISO 12800 in its standard setting, or from ISO 80 to ISO 51200 when expanded via a custom function.

The K-5 II features a glass pentaprism finder with an almost 100% field of view and approximately 0.92-times magnification (with a 50mm F1.4 lens at infinity) which provides a sharp, clear view of the entire image field and improves the accuracy and speed of both focusing and image composition. It also comes with the renowned Natural-Bright-Matte III focusing screen to facilitate manual-focus operation.

The K-5 II’s exterior casing is made of sturdy yet lightweight magnesium alloy, while its chassis is made of highly rigid stainless steel. Thanks to the inclusion of 77 special seals in the body, it boasts a dustproof, weather-resistant and cold-resistant construction, assuring reliable operation even under demanding outdoor conditions and at temperatures as low as -10°C.

The camera also features a dependable shutter unit that provides a top shutter speed of 1/8000 second and outstanding durability to withstand as many as 100,000 shutter releases.

The K-5 II’s high-speed continuous shooting mode records as many as 30 images (in the JPEG format) in a single sequence at a maximum speed of approximately seven images per second. This allows the photographer to capture sharp, crisp images of active, fast-moving subjects, such as athletes, dancers and wildlife, with great ease.

Thanks to its flexible design, which tilts the image sensor unit in all directions, the K-5 II offers several useful features to assist the photographer during shooting, such as auto-level compensation and image composition fine-adjustment functions. In combination with the optional GPS Unit O-GPS1, it also offers an ASTROTRACER function to simplify astronomical photography.

The K-5 II features a custom image function, which allows the user to easily select the desired finishing touch for an image. This function offers a choice of nine distinctive custom image modes, such as: Bleach Bypass, which creates a solemn visual effect similar to one used in motion pictures; and Cross Process, which produces eye-catching images with unique, dramatic colours. The K-5 II also offers 18 digital filters to add distinctive visual effects to images, without the need for a computer. The user can even apply several different filters to a single image to create more inventive visual effects.

The K-5 II s is available without an anti-aliasing filter. This filter, commonly found in DSLRs, helps smooth computer generated imagery by decreasing high frequencies and distortion, but it also reduces detail resolution. Without this filter included, the user can create rich, detailed imagery at supreme resolution levels and capture stunning landscapes and scenes with maximum depth of field and clarity. The K-5 II s is the perfect choice for studio and commercial photography where camera settings, lens selection and shooting conditions are controlled.

Customisable slow shutter speed NR (Noise Reduction) setting, with a choice of auto, on and off modes

CTE mode, to automatically adjust the white-balance to emphasise the dominant colours of a specific scene

PENTAX-original hyper control system, which swiftly and accurately responds to the photographer

RAW data retrieve function, which allows the user to save an original RAW data of a newly taken JPEG-format image

RAW/Fx button, for single-action switching of the image file format, as well as for assignment and instant recall of a specific function

A choice of three grid patterns while in live-view mode, including “Golden Section”

* Within the digital cameras that have an APS-C size sensor as of August 31st 2012 (based on PENTAX’s research). 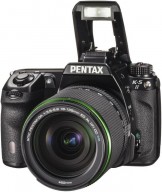