We caught up with Pentax last week to have a look at their new K-x DSLR camera.

Seamlessly slotting in between the entry-level K-m and prosumer K-7 models, the Pentax K-x is largely based on the design of the former camera, but inherits many of the features of the latter. Pentax are aiming the K-x at users who want something more advanced than an entry-level DSLR such as the K-m, with its small size, light weight and ease-of-use making it ideal for the enthusiast looking for a compact yet sophisticated camera.

Click through to read the full Pentax K-x preview…

Advanced features like live view, HD movies, 4.7 frames per second continuous shooting, 11 point auto-focus, PRIME II processing engine, and a high ISO of 12,800 means that the Kx is almost as well specified as its K-7 big brother, with the notable differences being the lack of any weather sealing, slightly fewer megapixels, 96% viewfinder coverage, plastic body, no battery grip and less sophisticated metering system. The Kx is a lot cheaper on launch though, with an RRP of £599 with a kit zoom lens.

There are a few things that we’d like to have seen included - the lack of on-screen focus confirmation, as on the K-m, is the main one, with Pentax stating that their priority was to keep the camera size small, with no space to store this function in it. Also lacking are a HDMI port to go with the new HD movie mode, apparently to help balance the body size and design, and the complete removal of the K-m’s useful Help button. Several of the K-7’s more advanced features, such as automatic leveling and composition adjustment, haven’t trickled down to the K-x.

Looking to the future, Pentax are still planning to release their much-delayed 645D medium format camera, now due to launch in 2010. A version of the K-7 with the K-x’s 12 megapixel CMOS sensor will not be released, nor will there be any coloured lenses to go with the K-x apart from the standard 18-55mm zoom. DA-L lenses will continue to be sold only as part of K-m / K-x kits, and Pentax were keen to stress that the K-x has been solely developed by Pentax alone, and not in conjunction with Samsung.

Check out the gallery below for 12 up hands-on photos of the new Pentax K-x and 55-300mm lens. 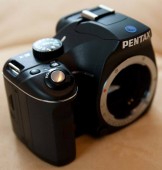 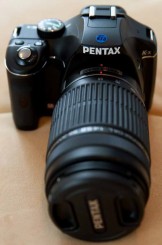