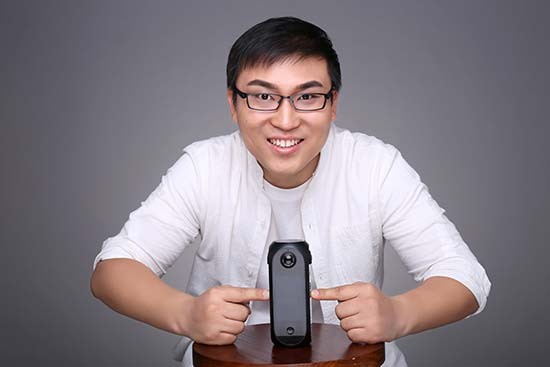 The Pilot Era is the world’s first VR 360° camera with in-camera 8K video stitching. With the new Pilot Era, photographers will be able to use a self-contained professional-grade panoramic camera to create high quality stitched videos and images easily and quickly and upload them, all within the camera itself. Pilot Era is the only camera which can shoot and record images and videos from 4k to 8k and stitch them seamlessly inside the camera, with up to 6K stitched in real time. The Pilot Era is expected to be available on Amazon in April 2018.

Pilot Era camera allows users to shoot video or images, stitch and upload from the camera in real time, in 4G, no mobile devices needed

CES, Las Vegas, NV–January 9, 2018 — Pisofttech, a technology company developing state-of-the-art technologies in computer vision and artificial intelligence, will introduce the world’s first VR 360° camera with 8K video stitching in camera and 6K real-time stitching at CES 2018. (The camera will be demonstrated at booth No. 42974, Wireless Devices & Services, Sands Expo). With the new Pilot Era, photographers will be able to use a self-contained professional-grade panoramic camera to create high quality stitched videos and images easily and quickly and upload them, all from within the camera itself.

Pisofttech, the maker of the Pilot Era, is one of the top 3 panoramic and 3D algorithm solutions providers in the world and developed the stitching algorithm used in more cameras globally than any other. The company has provided panoramic IP algorithms to chip companies such as Rockchip as well as the core panorama technology to cloud platforms such as Tencent cloud. Pisofttech’s algorithms have made it much easier to stitch an image in the camera, allowing for fast recording and uploading and no more overnight editing sessions. The new Pilot Era is the company’s all-in-one 360° VR camera; one which redefines the VR camera user experience.

“The new Pilot camera frees photographers and VR content creators from days of painful post-processing effort to stitch together the panoramic video. Now they can conveniently and easily shoot extremely high-quality panoramic images and videos to create immersive experiences and share them in real time without any additional equipment,” said Adler Shen, CEO, Pisofttech. “Our core technology is the object recognition algorithm, including motion analysis technology, which enables the panoramic camera to detect and interact with images more accurately and makes it smarter. This technology will be integrated into the Pilot Era soon, so that the camera can recognize images locally rather than having to upload them to the cloud for recognition and analysis. This will provide a huge performance advantage over systems that rely on the CPU or GPU to run vision algorithms.”

Pilot Era is the only camera which can shoot and record images and videos from 4K to 8K and stitch 4K to 6K video seamlessly in real time inside the camera. It can also stitch 8K video inside the camera with a 1 to 1.8 time ratio; that means stitching one minute of 8K video in about 1.8 minutes. Users can select different resolutions to achieve better image performance, for example shooting and recording video in 4K at 60 frames per second or 8K at 25 frames per second depending on the circumstance. A photographer can also preview the panorama in real time, on the camera’s screen or from the mobile app.

Features of the Pilot Era 360° panoramic camera include:

The Pisofttech Pilot Era will be demoed at booth No. 42974, Wireless Devices & Services, Tech West, Sands Expo Level 2, Hall A-D, at CES 2018. The product is expected to be available on Amazon in April 2018.

About Pisofttech Pisofttech, based in Shenzhen, China, is the world’s leading panorama camera company. Founded in 2012, Pisofttech has received over $5 million funding from investors including ARM, SummitView Capital and SouthBridge Capital. The company is committed to panoramic stereovision algorithm research, embedding the images and graphics algorithms in the local device with great precision. Pisofttech’s state-of-the-art technologies based on pattern analysis and machine intelligence are integrated into the panoramic scenarios for further applications such as object detection, tracking, and personal authentication and can bring revolutionary changes for intelligent monitoring, unmanned supermarket checkout, autonomous cars and more. Pisofttech’s core algorithm makes the camera more intelligent than ever. Pilot Era is Pisofttech’s hardware product for the panorama VR industry. For more information visit http://www.pisofttech.com/