With the high-end digital compact market expanding at an exponential rate (up by over 160%), Ricoh have decided to come back and reclaim their crown as the kings of prosumer cameras. But the competition is ferocious with the big guys on the battlefield, such as Canon and Nikon. We went to see Ricoh to have a chat about the new GR and see what tricks it has up its sleeve. With an SRP of £599.99, the GR will be available around May 2013 and in black.

Ricoh have been making the GR series of cameras since 1996 when they released the GR1. They released a new model every couple of years or so until 2001 when they went quiet. Four years later they released the GR Digital signaling a new age in high end digital compact cameras. After six years of various tweaks including a brighter lens, faster processor and improved image quality in low light, Ricoh have produced the GR.

There are a number of impressive features including a good quality fixed 28mm lens which has only 7 elements in 5 groups, two of which are aspherical. It also sports an ISO sensitivity range of ISO 100-25,600, full manual modes, DNG RAW recording with in-camera RAW conversion, SDXC card compatibility and several digital filter effects. If you prefer HDR or multiple exposure shooting, the GR can help you with that.

Arguably, the most important change to the GR is the introduction of the larger APS-C sensor. The new sensor has 16.2 megapixels and Ricoh have purposefully left out the anti-aliasing filter. Why? Well the GR is all about image quality. That’s why we’re seeing a good lens on the front and a reasonably high resolution on a larger sensor. The omittance of the anti-aliasing filter will increase sharpness of the pictures, but runs the risk of moire. The GR has a software system for removing moire. 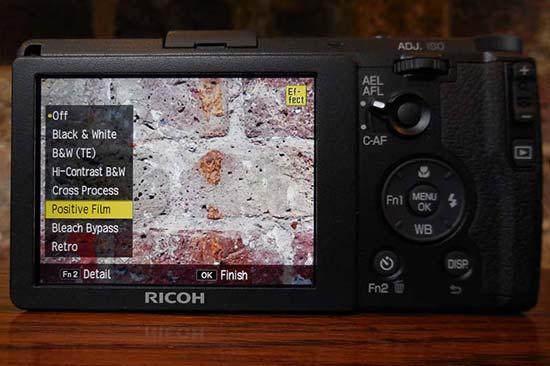 The processor is a new GR Engine V. Improvements have been made to ensure it’s as fast as possible. It can shoot continuous images at 4fps (frames per second) and has to deal with the lack of a low pass filter.

Switching on the GR is a speedy affair. It’ll be on and ready to shoot in around 1 second. It also has a shutter lag of 0.03sec. That’s pretty fast for a compact. The screen displays a histogram and horizon leveller. In the Main menu, there are three main tabs that have a plethora of options. The menu display is a black background with a bright yellow highlight. There’s also a small switch at the top marked ADJ/ISO, which will bring up five most used features: ISO, resolution, aspect ratio, focusing modes and metering. There’s a function button (fn) for a fast access to your favourite function. This can be adjusted in the Main menu if you find you use other features more. On the side of the camera is a button to access the digital filters. We like digital filters, they add a different dimension to how people approach photography. They emulate older styles or techniques of photography from black & white and positive film, to bleach bypass and cross process. This latter filter was first seen in mainstream cameras on the Pentax K-x so there’s a definite benefit to merging with other companies. 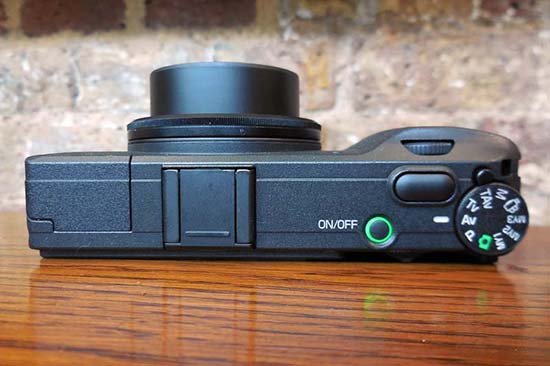 It could be argued that the influence from Pentax of which digital filters to use is a paltry one, but the interesting thing is the backwards compatibility with some GR4 accessories. As a general rule of thumb, when a new camera comes out, so do new accessories. However, the optical viewfinder, battery, charger and AC adapter are all interchangeable with the GR4. There are a few new accessories such as the lens hoods, wide converter, case and strap. But they’re necessary to deal with new dimensions of the slightly larger body on the GR.

Another influence from Pentax DSLR technology is on the command dial. Typically, the options available are Program (P), Aperture priority (A), Shutter priority (S) and Manual (M). There’s now another option on the GR which is inspired from Pentax. The mode is marked as Tav and stands for Time Aperture value. You can set up the shutter speed and aperture you want to shoot at and the camera will adjust the ISO to get the correct exposure. This is similar (in the way that it’s precisely opposite but uses the same principles) to the Pentax Sv mode which allows the user to select an ISO setting and the camera chooses the shutter speed and aperture to get the shot. 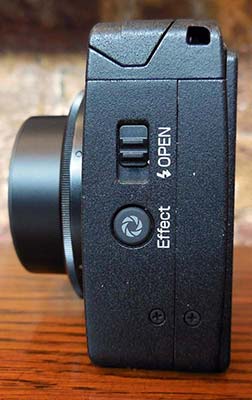 The build quality of the GR is exceptional. It’s metal throughout and we’ve already touched on the quality of the lens. The MTF charts we saw seem impressive with more than 80% of MTF in the centre of the screen. With the lens, large sensor and lack of low pass filter, the comparable images we saw showed a sharper picture. However, these were pre-production samples and firmware updates may change image performance so we weren’t allowed to take pictures. The full review will verify the claims. The buttons have been placed to the right of the screen which is a lovely, bright 3 inch LCD type with 1.2 million dots. They’re a little scrunched up, but laid out intuitively. The idea is that you can shoot one handed if you want to. That’s certainly possible – as long as you’re right handed – and the camera is nicely balanced for it, too. 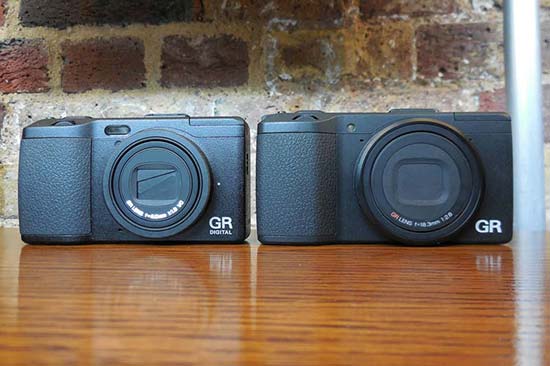 Ricoh have been away for a couple of years after simply upgrading the same camera and getting to the fourth generation in 2011. Now they’re back with something completely different. They’re a little late to the “stick a DSLR sensor in a little camera” party, but there’s something to be said for the company that sits back and sees what everyone else does before going one better. The fact is that at £599, weighing 245g and with a dimensional size of 117x61x34.7mm when closed, the GR is the cheapest, lightest and smallest APS-C digital compact camera on the market.

The features don’t look anything new to the industry, there’s no ground breaking technology, but the camera looks lovely, has the large sensor to get great pictures, is incredibly fast and with the inclusion of the digital effects, should appeal to a wider market. The demographic without it would be photographers looking for a top quality compact as an extension or different option to their DSLR. Now, people looking to move into serious photography from a hobby can get involved too. The lens isn’t a zoom and we can see the reasons behind using a prime, but we can’t help but think it may put some people off, which is a shame.

The most important part of our meeting with Ricoh is that they emphasised that the principle of the GR is image quality. We asked if they considered that it may spark a pixel war again, but they’re confident that they’ve angled their focus at lens and sensor quality.

The full review will tell us just how good the GR really is, but from what we saw, it looks like a lean piece of kit.