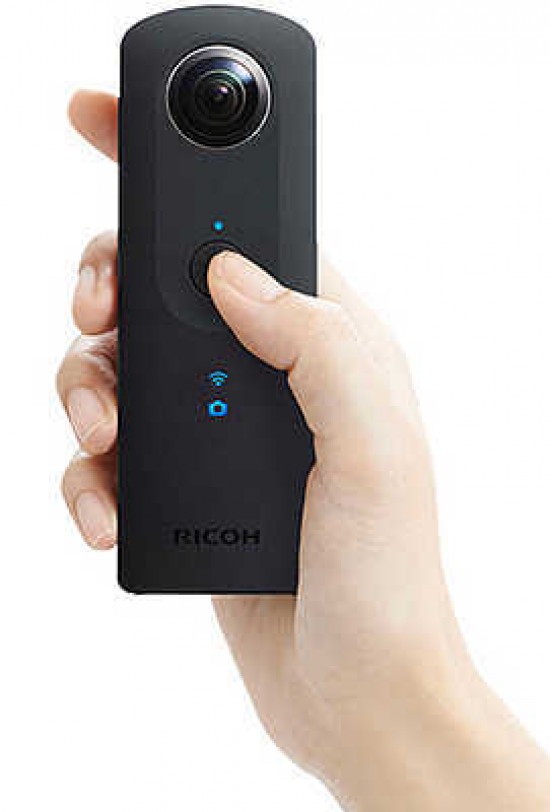 Ricoh today announced the Ricoh Theta S, the newest model in their Theta series of spherical cameras. Unveiled today in Berlin at IFA, the camera features a resolution of nearly 14 megapixels, fully spherical photos and videos captured in one shot, a live preview function and even greater compatibility with social media platforms. It also comes with an enlarged image sensor and fast f/2 lenses. Spherical images can be uploaded to theta360.com, shared via Facebook, Twitter and Tumblr, and posted to Google Maps, Google+ and YouTube's360°Channel. Coinciding with the launch of the camera, Google Maps today introduced a new Google Street View app that offers the ability to shoot photo spheres and to connect to spherical cameras. The recommended retail price of the Ricoh Theta S is £299.99.

Spherical images can be uploaded to theta360.com, shared via Facebook™, Twitter™ and Tumblr, and posted to Google Maps™, Google+™ and YouTube™360°Channel. The application program interface (API) for RICOH THETA S is based on the Google-supported Open Spherical Camera API for compatibility with Google’s services.

Coinciding with the launch of the RICOH THETA S, Google Maps today introduced a new Google Street View™ app that allows you to capture and publish your photo spheres instantly to Google Maps for people all over the world to explore. The app also offers the ability to shoot photo spheres and to connect to spherical cameras. This new capability to connect to spherical cameras makes it easier than ever to create Google Street View experiences.

The RICOH THETA S also boasts an updated design and user interface. Usability has been improved with an elegant but practical sure-grip black rubber coating and handy face-mounted LED mode indicator. Internal memory has been increased to 8GB.

The original RICOH THETA was launched in 2013 as the world’s first mass-produced camera to capture fully spherical images. Since then, the series has inspired a unique genre of visual creativity for capturing everyday scenes from an all-new perspective.

Noboru Akahane, Ricoh Imaging’s President and CEO, said: “We are delighted to offer users increased value and richer 360-degree experiences with our new RICOH THETA S. The model’s enhanced image quality and other exciting new features are sure to expand the scope of RICOH THETA fans in all-new fields.”

Charles Armstrong, Google Maps Product Manager, said: “The Street View app allows people all over the world to explore user contributions, Google’s own imagery, and their own published photo spheres through a seamless world map of landscapes, landmarks, business interiors and more. The RICOH THETA S is a great tool to create this imagery, and we hope it inspires people to contribute to the map.”

Ricoh Imaging will market the RICOH THETA S, which was developed and manufactured by Ricoh. The RICOH THETA S will go on sale in the UK from late October.