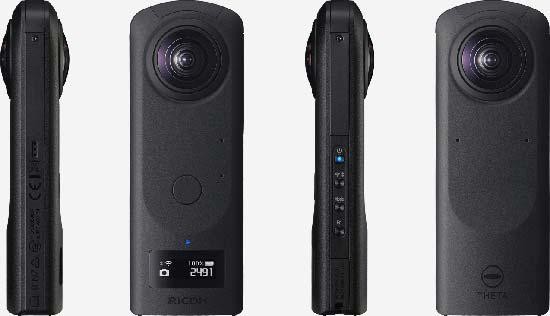 Since RICOH launched the world's first 360-degree consumer camera*1 in 2013, the company has stayed at the forefront of this emerging technology as it continues to evolve, and become an integral tool for the burgeoning industries of virtual reality (VR), social media, business, real estate + more. Exceptional imaging and sleek design come together to deliver unique, expected visuals; a seamless integration into any element of everyday life - business or pleasure.

The RICOH THETA Z1 is the flagship model of this series, with RICOH deploying exceptional optical and image processing technologies, cultivated through years of high-performance camera development, to pursue its highest resolution and quality to date. The compact main body is equipped with a 1.0-inch back-illuminated CMOS image sensor, enabling approx. 23MP resolution 360-degree still images. It supports a diverse range of shooting modes, such as aperture priority, allowing users to take high-quality images regardless of the setting: outdoors, nighttime, indoors, tropical beaches or snowy mountain views - nothing is off limits. Moreover, it is possible to shoot considerably smooth and immersive 360-degree videos in 4K (3840×1920 pixels) and 30 frames per second (fps) thanks to powerful 3-axis rotational stabilization to compensate for rotational shake.

The main body of the camera, with a 0.93-inch organic EL monitor and a Function (Fn) button, grants users access to a multitude of information at a glance, including number of possible shots, exposure settings, and more, thus greatly improving the operability of the camera itself. In addition to JPEG, RICOH THETA Z1 now supports Adobe® DNG format (RAW) so that users can enjoy professional image editing as with a general digital SLR camera. Basic performance improvements are most evident in the Android™-based system, which now offers flexibility in number of expansions one can add to the Z1 through the installation of additional plug-ins. The overall functionality of the latest model from RICOH not only meets the high demands of serious photographers, offers an optimal performance for professionals and amateurs alike.

Opportunities to use 360 images in innovative ways are increasing at a rapid pace. RICOH THETA is heavily utilized in business use cases around the world. Advanced services leveraging RICOH THETA V in real estate and construction are offered by Ricoh Tours, Zillow 3D Home, Matterport Capture, and HoloBuilder JobWalk, and future integrations with these partners services and the new RICOH THETA Z1 are planned.

RICOH'S THETA Z1 will be available to preview up ahead of its official release at the RICOH Imaging booth during CP+ 2019, the world's premier show for Camera and Photo Imaging held at PACIFICO Yokohama this February 28, 2019.

*1 As a mass-produced consumer product capable of capturing the scene around, above and below the device in a fully spherical image (as of October, 2013, based on RICOH research).

* Adobe, Photoshop, and Lightroom are trademarks or registered trademarks of Adobe Systems Incorporated in the United States and other countries.