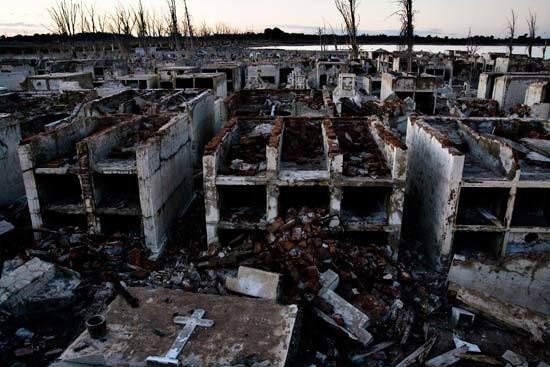 The winners of the Student Focus Competition for the Sony World Photography Awards 2010 have been announced. Victoria Ines Dobaño and Rodrigo Terren Toro’s winning images, entitled Villa Epecuen, depict the overwhelming power of water. The students’ challenge was to produce a series of six photographs that explored the notion of ‘Power’. The 2011 Student Focus competition has now been launched.

From the 120 institutions initially selected to compete, 12 students were shortlisted from six institutions across six continents to take part in the final stage of the competition. The students’ challenge was to produce a series of six photographs that explored the notion of ‘Power’. The 12 students were given two weeks to complete the exercise within their local community. The 12 winning students and the overall winning university received a combined prize of €45,000 worth of digital SLR photographic equipment, courtesy of Sony.

Victoria Ines Dobaño and Rodrigo Terren Toro’s winning images, entitled Villa Epecuen, depict the overwhelming power of water. Villa Epecuen in Argentina was a town which for many years drew tourists who believed that its saltwater lake had healing properties. It was a sacred place for the native people of Argentina.

In 1985 Villa Epecuen was completely flooded when the lake overflowed its embankments, covering over half the town. The aftermath of the disaster reveals the powerful and devastating effects of water.

Student Focus 2010 judge, Sue Steward, commented: “The choice of Power as the theme for this year’s Student Focus ignited an exceptional standard and variety of work. Maybe it’s the abstract quality of the word which prompted interestingly different responses from the six universities. The winning Argentine series followed-up the story of a tragic flood 25 years ago, a description of the power of nature. The photographers found beauty in the stark, abandoned and destroyed landscape, the chaos of fallen bricks and concrete, dark leafless trees, and partially demolished buildings - the crucial reminders of lives once lived there. The choice was difficult but ultimately this series possessed the greatest maturity and depth of them all.”

On winning this award the students tutor at Escuela Argentina de Fotografia, Ines Yujnovsky, commented: “Teaching photography means transmitting the passion of this fascinating art and technique and we believe students should search their own vision. Student Focus encouraged students to think about their own approaches to themes like ‘War and Peace’, ‘Power’ and ‘Everyday life’ in a city like Cannes. Having the opportunity to go to the Festival was incredible. We enjoyed talks, exhibitions, portfolio reviews and met interesting people who are dedicated to photography. For us being the “University of the Year” and to win the prize will improve our possibilities to continue expanding the passion of photography to young students.”

Ania Wadsworth, Student Focus Manager at the World Photography Awards, commented: “We have been delighted with the quality of work submitted into the 2010 Student Focus competition. The students interpreted the brief with such intelligence and professionalism and the judges were impressed by the originality of thought and true breadth of imagery.

Student Focus continues to expand with events around the world, our partnership with the Young Tate Online and yet another internationally renowned jury; 2011 promises to be a vibrant year.”

Yoshiyuki Nogami, Vice President of Digital Imaging at Sony Europe, commented: “We are honoured to be able to support these talented young individuals and have been impressed by the exceptionally high standard of images they have produced during this competition.”

More information about Student Focus 2011 can be found at http://www.worldphoto.org/student-focus/