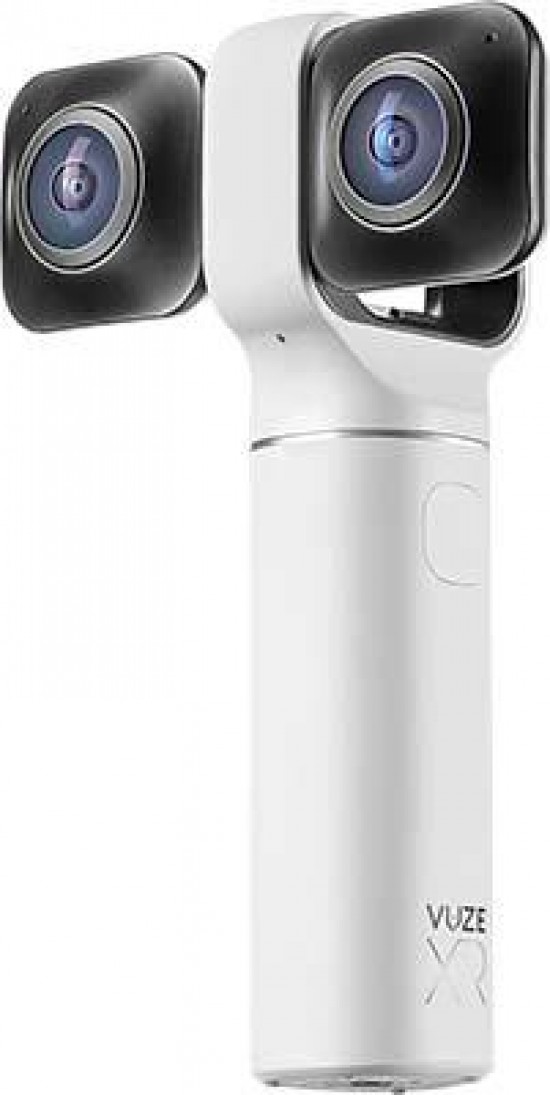 Available for pre-order for $439, the Vuze XR Camera makes immersive content creation possible in 360° and VR180, both in 5.7K, all from one compact device

The Vuze XR App gives anyone the ability to easily edit and add director-like effects to videos and photos, plus the ability to live stream to social media

(NEW YORK CITY & COLOGNE – Sept. 26, 2018) Building on its aim to make 360 degree and VR photo and video content creation accessible to all, HumanEyes Technologies announced today at Photokina the full product details for its Vuze XR Camera, which is now available for pre-order at VuzeXR.com for $439.  Starting today through November 4, customers that pre-order will receive a free bundle that includes a 360° underwater case, a micro SD card and free worldwide shipping (valued at $175).

Shipping in late November, the Vuze XR Camera enables consumers and prosumers to create and share immersive experiences in 360° (2D) or VR180 (3D) formats, both in 5.7K resolution. The camera includes the Vuze XR Mobile App, for iOS and Android, and desktop editing software, for Mac and Windows, which allows anyone to edit and enhance content with popular 360° panoramas like Tiny Planet, as well as stickers, text and more. Users have the ability to live stream to social media or share photos and videos later with family and friends.  Vuze XR Camera customers can create their own VR website to host and share content with the HumanEyes Zone, making VR videos even more accessible.

“People want to bring their content to life and they want to share their experiences for others to enjoy.  We created a dual 360° and VR180 camera, along with a companion mobile app, giving anyone the ability to capture high quality immersive experiences that can be shared in the moment.  The Vuze XR Camera makes it easy and fun to share all of your favorite moments from every angle,” said Shahar Bin-Nun, CEO of HumanEyes Technologies.

Available in black or white, the unique dual-camera design seamlessly combines two advanced capture systems into one pocketable device. Portable and simple-to-use, the camera gives everyone the power and convenience to record, live stream and share videos and photos from their mobile phone or computer.

●      The ability to live stream to popular social media channels, including Facebook and YouTube in both 360° and VR180.

●      Google VR180 Certification: HumanEyes is working closely with the Google team to complete VR180 certification for the Vuze XR Camera.

●      The Vuze XR Mobile App: For iOS and Android, the app provides remote camera control over Wi-Fi, photo and video preview, editing, and the ability to upload and live stream to social media. Additionally, the app features stabilization control, photo and video filters, virtual stickers, the ability to add text, color adjustments and the “Directors Cut” mode with Track and Follow object viewpoint adjustment, Little Planet effects, fly in and out effects and more.

●      Desktop Editing Software: For Mac and Windows, the software supports basic and advanced editing and stitching functions for VR180 and 360° content, including live streaming in both VR180 and 360°, as well as sharing directly to social media channels.

Photokina attendees can be among the first to see a demo and experience the power of the new Vuze XR Camera at the HumanEyes booth H-015 in Hall 5.2 from September 26-29.

The HumanEyes Vuze XR Camera is the latest innovation from the company’s award-winning 360° and VR camera line, which includes the Vuze and Vuze+ VR cameras. To see the Vuze XR Camera in action, view more product specifications and pre-order, visit VuzeXR.com.  To see it in person please visit the booth at Photokina.

Founded in 2000, HumanEyes Technologies is a veteran in 3D and animated content creation and has over 70 patents covering relevant technologies and processes across the market. Recognizing the growth potential in VR, HumanEyes has focused its longstanding experience in the space to provide end-to-end VR video solutions that make the creation of virtual and augmented reality content easy and accessible to everyone from professionals to consumers. As the vibrant VR and AR market segments develop, HumanEyes is helping define the innovation standards that will drive mass appeal, with the Vuze, Vuze +, and Vuze XR VR Cameras. HumanEyes’ multi-patented computer vision technologies inside the world’s first affordable VR camera are enabling the bustling ecosystem of creation, production and publishing of unprecedented immersive VR experiences.