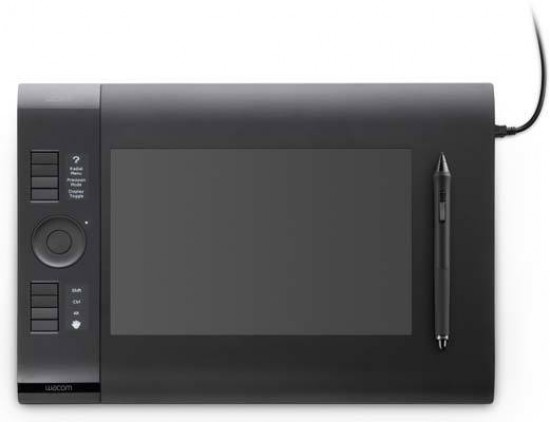 Wacom Intuos4 is a new professional pen tablet that delivers new features and unparalleled performance to photographers. The Intuos 4 is capable of capturing the slightest nuance of pen pressure against the tablet surface, as well as offering 2048 levels of pressure sensitivity. Other innovative product enhancements offered by the Intuos4 include a refined and intelligent industrial design, customizable shortcut and modifier keys with accompanying OLED displays, and a user-defined Touch Ring capable of controlling up to four different functions in any application. The Wacom Intuos4 is available now and comes in four sizes - small ($229 / £199.99), medium ($369 / £329.99), large ($499 / £429.99) and extra large ($789 / £699.99).

Vancouver, WA – Mar. 25, 2009 – Wacom® today unveils the long anticipated Intuos®4, a revolutionary new professional pen tablet that delivers new features and unparalleled performance to photographers, designers and artists seeking optimal control and improved productivity. Inspired by members of Wacom’s professional community, the next generation Intuos is anchored by the Intuos4’s amazing new pen performance, capable of capturing the slightest nuance of pen pressure against the tablet surface, as well as offering 2048 levels of pressure sensitivity. Other innovative product enhancements include a refined and intelligent industrial design that provides real advancements in looks, comfort and control. Specific workflow and productivity tools to savor include the customizable shortcut and modifier keys with accompanying OLED (Organic Light Emitting Diodes) displays, which allow users to see, via the displays, what the keys are currently set to.

All New Pen Performance
The Intuos4 Grip Pen features Wacom’s new proprietary Tip Sensor technology, offering users near-zero (one gram) starting pressure for the most natural-feeling experience of any digital pen to date. “Now, any writing, art or design tool can start with an incredibly light touch, emulating the same feel, response and result derived from working with traditional media,” said Don Varga, Senior Product Manager for Wacom Technology Corp. Additionally, the Intuos4 pen delivers 2048 levels of pressure, doubling the resolution of the pen’s pressure curve to further enhance feedback and expand the creative effects within software applications that support pressure sensitivity. “Delivering a consistently responsive and fruitful pen tablet experience starts with the pen. The Intuos4 Grip Pen provides a broader range of input options that will delight even the most discriminating professional,” continues Varga. “In addition, our latest pen technology should encourage Wacom’s software partners to continue to expand pen-related features and functionality.” The Intuos4 Grip Pen also features a pressure-sensitive eraser and two customizable side switches for setting commands such as double-click and right-click on the pen. For those looking for a pen with a thicker barrel, a wide-body Intuos4 replacement grip is being made available as an optional accessory.

Breakthrough Design Improves Workflow, Boosts Productivity
With its ergonomic design, the ultra-slim Intuos4 pen tablet is the ideal creative instrument for working with digital content. Its new reversible (ambidextrous) design puts all of the shortcut and modifier keys in the ideal position for right-handed or left-handed users. The ExpressKeys™ are conveniently located on one side of the tablet, making them all available to the users’ non-dominant hand. To move from right-handed to left-handed use, simply rotate the tablet 180 degrees and change the orientation of the illuminated icons within the Wacom Tablet driver software. These application-specific ExpressKeys are instrumental in helping improve workflow and boost productivity by placing commonly used commands right at the fingertips. The close proximity of these tools to the actual work area is efficient and comfortable and helps save valuable time by minimizing dependence on the keyboard without taking focus away from the pen hand. New to the Intuos4 are illuminated (OLED) displays (not featured on the Intuos4 small) that provide a helpful reminder as to the current function of each ExpressKey. With past Intuos versions, users had to rely on their memory to recall the position of their specific settings. As these settings can be application specific, the displays will update immediately as the user changes between applications.

Also new to the Intuos4 is the introduction of a user-defined Touch Ring capable of controlling up to four different functions in any application. A button located in the center of the ring “toggles” the ring between functions such as zoom, scroll, brush size adjustment, canvas rotation and layer selection. One of the four LEDs located along the perimeter of the Touch Ring indicates the current function. “The Intuos4 design carries form and function to new heights,” said Varga. “Never before has a Wacom pen tablet so elegantly provided such tangible workflow and productivity enhancements.”

More Intuos4 Innovations
A new weighted pen stand not only provides a convenient pen holder, but also functions as a handy twist-off storage compartment for pen nibs and handy nib removal tool. Standard, felt, stroke and flex nibs ship with the Intuos4, allowing users to simulate working with a variety of traditional art and design materials. If users have a task for which they prefer a mouse, the Intuos4 includes the most advanced, cordless, battery-free mouse that Wacom has ever developed. A technology upgrade in the mouse allows the cursor to move based on both the direction and orientation of the mouse, delivering smooth and accurate tracking across the tablet surface. Each of the five buttons and the scroll wheel can be customized by the user.

Valuable Software
Intuos4 ownership entitles professionals to pick and choose valuable software titles based on individual needs. A selection of software applications from such industry leaders as Adobe®, Autodesk®, Corel® and Nik® are available to users following installation of an Intuos4 pen tablet. In addition, Intuos4 users will appreciate the significant upgrades to Wacom’s powerful, user-friendly driver software, including the introduction of radial menus for quick “penpoint” access to additional shortcuts or to launch applications.

Noteworthy Accessories
Intuos4 owners are encouraged to take advantage of some additional tools. For example, the 6D Art Pen supports the barrel rotation feature within such applications as Adobe Photoshop®, Illustrator® and Corel Painter® X to deliver natural brush effects, much like a calligraphy pen. The Intuos4 Airbrush offers users the ability to create and define paint patterns within certain creative programs. Intuos4 accessories are conveniently located at the www.wacomdirect.com Internet site.

“By listening to our customers we are able to deliver today a revolutionary pen tablet packed with new technologies and features that exemplifies Wacom’s commitment to the professional creative community,” said Joe Deal, President of Wacom Technology Corp. “The Intuos4 is a sophisticated pen tablet that artfully addresses their needs with exciting new pen performance and thoughtful detailing,”

About Wacom
Founded in 1983, Wacom’s vision to bring people and technology closer together through natural interface technologies has made it the world’s leading manufacturer of pen tablets, interactive pen displays and digital interface solutions. The advanced technology of Wacom’s intuitive input devices has been used to create some of the most exciting digital art, films, special effects, fashions and designs around the world and provides business and home users with the ability to explore digital content creation in a comfortable, natural way. Today, millions of customers use Wacom’s cordless, battery-free, pressure-sensitive pen technology to express their creativity.